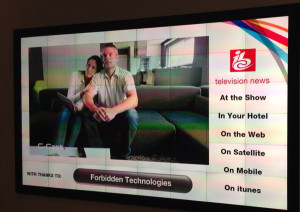 Forbidden Technologies plc (AIM: FBT), the AIM-quoted owner and developer of the market-leading cloud-based video post-production platform Forscene, announced today that the product will serve as one of the core technologies behind IBC TV’s expansion into year-round programming. And, for the first time, Forscene will play a role in managing video content for the prestigious IBC2014 Innovation Awards.

“We have partnered with IBC TV for the past six years to provide access to news footage during the week of the show, and now IBC TV will get even more value out of that partnership by using Forscene to make show footage available all year long,” said Greg Hirst, business development director, Forbidden Technologies plc. “Now anyone who is authorised will be able to use Forscene to tap into IBC TV’s wealth of content and reuse it long after IBC is over.”

IBC TV, the official TV and webcasting channel for the International Broadcasting Convention (IBC) held each September in Amsterdam, will go from broadcasting one 20-minute program per day during the conference to 12 hours of continuous programming each conference day. Forbidden will supply IBC TV with unlimited access to the Forscene cloud and a 20-megabit uplink to a local Forscene server for video uploads during the show. Clip names and other metadata will be added at the point of ingest so that content will be searchable in Forscene. From there, authorised exhibitors and broadcasters can use Forscene to view and select material that they would like to use in their own programming.

“The idea behind this expansion was to transform IBC from a weeklong event into a year-round resource,” said Sue Robinson, producer, IBC TV. “Now we will not only be able to get the content out to more news outlets and encourage more reuse during the show, but after the show as well.”

Forscene will also be used to provide remote access to the IBC2014 Awards entries. Awards entrants will upload the high-resolution version of their video submission into Forscene over a standard Internet connection using the Web upload option. Various IBC repesentatives across different geographies will then use Forscene to access the entries — in both proxy and high-resolution form — to perform quality control, administrative review, and content preparation. Finally, Forscene will be used to deliver the original video source of the award entries to a London post house for production of video elements for the awards show.

“Using Forscene to view and transmit video amongst all of the parties involved will greatly streamline the way we manage the nomination materials,” said Dick Hobbs, video content manager for the IBC2014 Innovation Awards. “This will eliminate the downtime spent waiting for source video to get from one place to another, simplifying the process and creating a more efficient workflow.”