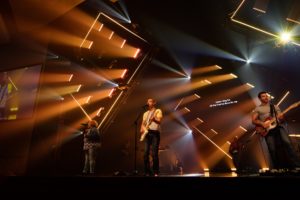 In a unique example of an EDM-style lighting fixture in a House of Worship, Nate Nohling, Lead Lighting Designer at Eagle Brook Church, a large ministry with six campuses across Minnesota, chose 156 ACL 360 Bar™ LED battens as the staple of a new lighting design.

“The number one thing I was shooting for when designing this set was impact,” Nohling explains. “I wanted to have a large quantity of fixtures that had the ability to create the impact we were looking for. That meant we needed a fixture that fit a price point that allowed us to have enough across all of our campuses to make an impact and a powerful beam from each fixture. We looked at a lot of different fixtures and the ACL 360 Bars were a great solution for what we needed.”

Eagle Brook’s six campuses range from large purpose-built facilities to more traditional church buildings to auditoriums. All of Eagle Brook’s campuses are utilizing the ACL 360 Bars as the main element of the design. “Our team strives to create a cohesive design that has a similar brand between all of our campuses, and utilizing the same fixtures is a key part of that,” Nohling states. “The design is scaled to fit each room and therefore the fixture count at each campus varies, but the design was created to have the same experience and feel at each campus.”

Supplied by Elation dealer Monkey Wrench Productions of Minneapolis, the ACL 360 Bars are used for everything from mid-week student programming to weekend services. “This project has a lot of interesting aspects to it, not least the fact that it uses an EDM style fixture in a House of Worship,” said Seth Scott, Head Chimp at Monkey Wrench Productions. “With Eagle Brook’s mutliple locations creating a common design to provide flawless continuity between all campuses is a design feat in and of itself.”

Nohling appreciates the experience that Monkey Wrench brought to the table and the cooperative relationship that allowed for the design to become reality. “Seth is one of the most important vendor relationships we have that allows us to do what we do every weekend,” Nohling says. “He is someone who understands how budgets and projects work and is always able to help us figure out a solution that fits our needs.” Monkey Wrench worked with Elation manufacturer rep firm Five Lakes Marketing on the project.

Main layer of the design

Nohling is responsible for developing and establishing the vision and brand for the design, and leads and oversees the church’s stage design team. The new install, with the ACL fixtures used as the main layer of the current stage design, was completed across all campuses over a two week period in August. According to Nohling, in year’s past they would create multiple stage designs a year but have now narrowed their focus to doing two designs per year. “This narrowed focus allows us to dedicate 4-6 months at a time to dream, design and plan, which has greatly increased the quality of our stage designs,” he says.

The ACL 360 Bar is a versatile moving batten with (7) 15W RGBW LEDs and continuous rotation for dynamic movement effects. At Eagle Brook they are hung in diamond structures above the stage and are used for every event in each of the campus’s main auditorium. Nohling comments, “The number one feature we wanted was a quality beam and the beam from the ACL 360 Bar’s allows us to create high impact looks to enhance our experience.” The fixture’s Art-Net connectivity was also an important factor in their choice. “With the amount of fixtures that we have, running separate universes of DMX to all of the fixtures would have been a nightmare,” Nohling added. “The network connectivity allows us to connect all of the fixtures together with cat5 without having to worry about getting a bunch of nodes to convert to DMX everywhere.”

The ACL 360 Bar’s individual pixel control has given the Eagle Brook design team a number of design options to explore. Nohling explains, “The ability to have independent pixel control has been huge for us in terms of flexibility. We are able to go from utilizing the full fixture to maximize impact to just a single pixel in our slower songs, which provides a completely different look and feel. These fixtures have held up great. They have been in use now for months and across 156 fixtures I believe we have had only one issue.”

Nohling concludes by acknowledging the team effort involved in creating such spectacular designs across multiple sites. “We have an incredible team that works together to pull off what we do,” he says. “We have some of the best lighting designers in the country in Tom Clark, Travis Leatherman, and Jason Goglio, who also make up our stage design team. Everything that we do is a very collaborative process where each person brings ideas and solutions to the table, and we couldn’t do what we do without each of them. We also have incredible campus production teams across all of our campuses that partner with us to actually do the installations.”