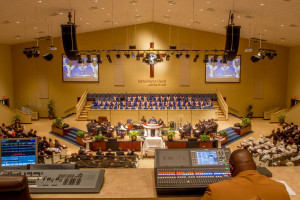 The worlds of house of worship and music are closely linked, with an enormous amount of work going into making a church the kind of environment suitable for music while delivering the message. These were the primary concerns of Alfred “Al-Tee” Williams, a leading live-sound engineer whose front-of-house and monitor mixing credits include Jay Sean, Kool & the Gang, Fantasia and most recently, Ludacris. It was while mixing front-of-house for Ludacris last year at premier music venue Park City Live during the annual Sundance Film Festival that Al-Tee first encountered the RoomMatch® loudspeaker system from Bose® Professional. As soon as he experienced it, he knew it was the right solution for his church, the 129-year-old Fairfield Baptist Church, in the Atlanta suburb of Lithonia, where music is an integral part of the worship service led by Pastor Micheal Benton. “We were having a lot of trouble getting good coverage to all of the seats, and the low-frequency response we were getting from the existing system was just not what we needed,” Al-Tee explains.

At the Park City Live shows he did with Ludacris, Al-Tee was consistently impressed. “During sound check, I walked all around the main floor then up to the balcony VIP sections – I was amazed at how good the coverage was in all areas – very smooth everywhere. But the real test came when I played some tracks for sound check that contained some really deep bass parts. The Ludacris song ‘How Low’ has a drop-tone that goes below 30 Hz, and many subwoofers just cannot handle this at the sound levels we need. I was blown away by the low-bass depth and impact that the RoomMatch subwoofers provided. I wanted the church to sound like this.”

Al-Tee traveled to Bose headquarters in Framingham, MA, where, working with Bose engineers, he was able to put the RoomMatch system through its paces, plugging in a huge variety of program material ranging from Ludacris and a wide range of hip-hop tracks to hard rock and classical. “I wanted to see how far I could push the system,” he says. “Once we had gone through all that, I knew the RoomMatch system would work for our church.”

The system was designed and installed by Al-Tee (and his company, Omny Pro Productions) and it is composed of two L/R arrays, each using three symmetrical and three asymmetrical modules. Four RMS218 subwoofers deliver strong enough bass to serve a hip-hop show. In addition, two RoomMatch loudspeaker modules are used for side fills on the outside of the left and right clusters, while four RoomMatch Utility RMU208 loudspeakers are employed for front fills. The system is powered by 10 Bose PowerMatch® PM8500N amplifiers fitted with 10 ESP Link Cards. Finally, the system is managed via a Bose ControlSpace® ESP-880 engineered sound processor. The church was able to take the system a step further by using an Audinate Dante™ Card for the ESP-880, putting it on a Dante digital audio network.

The outcome, says Al-Tee, is nothing short of spectacular. “The room is filled with music, the coverage is consistent and comprehensive,” he says. “The coverage was impeccable. And the sound is great right out of the box — the EQ has hardly been touched. And with the Dante card, we can control the system from anywhere. Last Sunday, I was able to mix the vocals on an iPad from the second row; the week before, I was able to control the system from Pittsburgh!”

Al-Tee says everyone in the church loves the sound now, including church Media Director Cleon D. Frazier. “Our previous sound system presented us with dead spots in the sanctuary, and we were under-powered in our sound requirements for our church services,” Frazier stated. “We would constantly get complaints from the congregation that certain areas were loud and other areas you couldn’t hear anything. The Bose RoomMatch system has solved those problems, and now the congregation can definitely tell the difference in the clarity of the spoken message as well as music.”
Deacon David Rollins, Church Financial Officer, agreed: “The new Bose system is clearer and stronger. Overall the entire project has benefited Fairfield as a whole and presented a better sound to our congregation and visitors.”