Framingham, Massachusetts, March 8, 2013 – Kansas City, Missouri’s World Revival Church, a 1,000-seat house-of-worship facility that ministers to a live congregation and broadcasts services globally, recently upgraded its sound system with components from Bose® Professional Systems Division. RoomMatch® loudspeakers and PowerMatch® amplifiers, along with other Bose products, were installed to deliver the clarity and intensity of the church’s services. The challenge was to provide a system that could deliver uniform coverage, consistent volume levels and optimized sound at every seat, and by all accounts, the new Bose system more than did its job.

Ten years ago, with demand for the church’s services on the rise, World Revival moved from its original meeting house to its current 1,000-seat auditorium, with stage space for a full band, 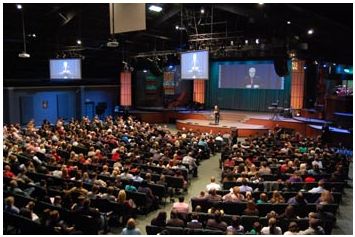 “We like a pretty good amount of volume in our worship,” says William Gilpin, World Revival’s Church Manager.

Over time, however, it became clear that, while the size of World Revival’s new home was adequate, the sound was not.

Gilpin contacted Steven Brown, System Design and Sales, Progressive Electronics, for a consultation. “Loudspeaker coverage in the space was spotty,” Brown says. “There were areas that were abrasive, and other areas that were soft. Nobody was getting the same kind of sound in the space anywhere.”

Brown’s background is in audio recording and he’s very particular about loudspeaker sound. He recently heard a demonstration of Bose RoomMatch loudspeakers. “I was floored,” he says. “I tho

ught with this product, Bose had knocked it out of the park. I was absolutely, totally inspired.” Brown told Gilpin and Gray, “I know of a sound system you would cry for,” and scheduled a demonstration for them. After hearing it for themselves, Gilpin and Gray became believers.Brown quickly got to work. “My goal was to paint the space with sound,” he says. “Keep all the direct energy off the walls and on the floor and the seats, so that it’s powerful without taking away from clarity and intelligibility.”
He brought in Bose sales and field engineering resources to work closely with him designing and commissioning the system. “The support from Bose is unmatched by most of the manufacturers I

The system uses three RoomMatch array clusters consisting of 14 RoomMatch loudspeakers; four RM5505, two RM7005, two RM7010, two RM7020, two RM9010, two RM9020 and four RMS215 subwoofers, all driven by seven PowerMatch PM8500N amplifiers programmed with Bose ControlSpace® ESP digital signal processing. For York, the PowerMatch amplifier was the right choice. “It has eight channels and almost limitless possibilities of what you can do with it,” York says. “It would be my go-to amplifier in almost any scenario.”

With their new sound system installed, it was time to hear what they’d been missing. “People could sit anywhere in the room and it was good,” Gilpin stated. “The sound is full and loud,” Gray says, “but somebody can talk to you at the same time. You can be right underneath it and still have good fidelity.”

“Everybody seemed ecstatic that first night. The clarity of it. The crispness. You could hear the low end, you could hear the highs,” added Dustin Smith, Worship Leader/Music Director. In fact, immediately after the broadcast, listeners from all over the world called World Revival, asking how they improved their broadcast audio mix. Which, of course, they didn’t. They improved the sound in the room instead.

“What we’re doing here works for us,” Gray says. “And touches thousands of people around the world.”