OKLAHOMA CITY, OKLAHOMA – MARCH 2013: Since its founding during the hard dustbowl years, Oklahoma City’s Southwest Church of Christ has grown steadily in membership. A series of buildings and sanctuaries of ever-growing capacity trace a path from the church’s first meeting, which took place in a member’s living room, to its modern 700-plus-seat sanctuary. Although only a decade old, Southwest Church of Christ’s latest building quickly amassed an ad hoc collection of sound reinforcement equipment that strained the capacity of the technician’s booth and often flummoxed the volunteer technicians who attempted to use it. Hoping to maintain its functionality while greatly simplifying the user interface, the church contacted Robert Rogers, senior design consultant with Audio Video Designs (AVD) of nearby Moore, Oklahoma. AVD used a cost-effective Symetrix Jupiter 12 app based turn-key DSP to replace all of the analog clutter. The church was so pleased with the improvement that they asked AVD to integrate their three fellowship halls, and AVD obliged using a Symetrix Jupiter 8 running the Sound Reinforcement #6 app configured to do room combining.

“The audio booth was cluttered with consoles, switches, and dials, with a few computers and screens thrown in for good measure,” explained Jeff Brocaw, design consultant with AVD. 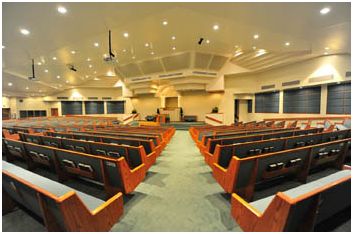 “They just kept adding on as new needs presented themselves. Not only was the sanctuary system controlled from the booth, so too were the more modest systems in the three fellowship halls.” Because the input sources and loudspeakers were all still in fine shape, AVD was able to leave them in place. However, new Crown and ElectroVoice four-channel amplifiers now power the system.

“Of course, money was a huge factor, and the Symetrix Jupiter 12 DSP was the logical choice,” said Brocaw. “We could eliminate all that clutter with the processing power in that single rack space unit, and they wouldn’t have to spend $20K on a digital console.” The twelve inputs of the Jupiter 12 collect outputs from all of the stage microphones, as well as from video playback devices and a pair of ambient microphones for use in recording. The Jupiter 12’s four outputs send signal to the main sanctuary system, the three fellowship halls, and a computer-based recorder, as well as hallways and other areas of the building. One of the outputs is currently unused and awaits future expansion.

Partly because there are a lot of open microphones on stage, Brocaw used the “Gating Automixer” app with the Jupiter 12. The gates effectively eliminate feedback problems that the church was having with the old system. For Sunday service, the system operator makes adjustments from a computer running the Symetrix Jupiter software. “Now it takes very little effort to run a service,” said Fred Lowery, with the church. “When needed, we mix from within the app. For the simpler Wednesday service, the pastor can make any necessary adjustments from a Symetrix ARC-2e wall panel remote. He doesn’t even have to turn on the computer! The church fell in love with the simplicity of the new Jupiter-based system.”

In fact, they were so pleased that they requested a similar transformation of the ad hoc room combining system that they had constructed. With eight inputs, eight outputs, and an app easily-made to perform room-combining (Sound Reinforcement #6) the Symetrix Jupiter 8 was the obvious cost-effective solution. “As with the Jupiter 12, the Jupiter 8’s interface is sufficiently simple that church staff and volunteers can use it reliably,” said Brocaw. “That simplicity, together with processing power and affordability, made the Jupiter 8 the right choice.”