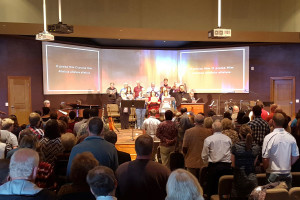 As the FCC spectrum auction approaches in April 2016, and this fast-growing church faces the loss of the 600-MHz frequency range, the Audio-Technica System 10 PRO system offers interference-free operation in the 2.4 GHz range with the features needed to keep the church’s message coming across loud and clear

The First Southern Baptist Church, a robust congregation of 800 people in Pratt, Kansas, recently had a new church building constructed by Builders for Christ (https://t.e2ma.net/click/tmpep/h9axrb/hxtnje), a non-profit that brings volunteers to construct church buildings for needy congregations. But what no amount of good will can accomplish is the replacement of the RF spectrum that’s being eroded as more of the UHF spectrum — the sweet spot for professional wireless audio systems — disappears as the FCC reallocates more of it for the growing cohort of mobile wireless devices. Brent Handy, Audio, Video, Lighting and Electronics Designer and Sales Consultant at Advanced Sound & Communication in Kansas City, MO, which provided much of the new church’s AV systems, says he initially tried to work with the church’s existing wireless microphone system, but found it was better suited to conference room applications and in any event wasn’t designed to be used in the quantities that the church staff needed them. “The previous contractor did not perform an on-site scan. The quantity of simultaneous systems was not recommended by the manufacturer, and the frequencies chosen weren’t recommended for Pratt, Kansas, by the FCC,” he adds, noting how the area’s agricultural enterprises utilize much of the UHF spectrum for field communications and wireless internet. “After doing research and scanning for a week, we could not find enough UHF frequencies to work reliably.”

That was the situation when an Audio-Technica (https://t.e2ma.net/click/tmpep/h9axrb/xpunje) rep visited Handy’s office and suggested the A-T System 10 PRO Rack-Mount (https://t.e2ma.net/click/tmpep/h9axrb/divnje) digital wireless system, which provides the same interference-free operation in the 2.4 GHz range — well outside TV bands — as the original System 10 wireless system, with expanded features and versatility. The System 10 PRO features 24-bit operation, easy setup, clear, natural sound quality, and three levels of diversity assurance: frequency, time, and space. “When the Audio-Technica rep came to my came to my office, I was like, ‘I don’t know, guys, 2.4 GHz? I haven’t had good luck with that.’ But I took it to my own church where we have some frequency congestion issues, and it worked, and it didn’t slow down my networks, so I was sold on it at that point.”

Handy eventually brought the System 10 PRO to Pratt and installed six channels at the church – four handhelds and two body packs, including two cardioid earset microphones – with remarkable results. “It worked,” he says. “In fact, it worked so well that I didn’t have to break the receivers and the antennas out of the chassis and mount them closer to the stage; they’re actually in a rack underneath the counter by the front-of-house mixer. You can take those mics outside the building and they still work. And just in time, really” – a reference to the fact that more of the UHF range, the 600-MHz band, will become largely unavailable in the wake of the FCC’s spectrum auction later this year. The same thing happened after the agency reallocated the 700-MHz band four years earlier, displacing thousands of wireless microphone users. “And 900 wasn’t an option because that’s what the agriculture guys use out there,” he says. “So this was it, and they sounded great, the pastor was happy, the worship pastor was happy. They’ve had dropouts in all their wireless systems for the last ten years; they’ve never had a system without a glitch. Today, no glitches at all.”

In fact, says Handy, the A-T System 10 PRO is now the only 2.4 GHz wireless system that he’ll ever sell in the future. “Because I know it works,” he says. “And because it’s so easy to set up — the entire transmitter/receiver pairing process is so easy and trouble free, it greatly reduces the install and setup time,” a benefit for both the customer and the integrator. “There’s no way users can easily mess it up, which means I won’t have to go back out and retune,” he explains. “That’s a common problem with the other systems: users can easily push a button too many times and change channels on a transmitter, and then we have to do a service call to push a button.  This is the perfect wireless solution.”