Taking place at the iconic Tropicana Casino Resort, right in the heart of Las Vegas’ infamous Strip, the Mobile Beat trade show brings together DJs, MCs and entertainers from across the USA and around the world. For the second year running ADJ sponsored 2019’s event, providing lighting, video and effects production for the main stage which hosted educational seminars throughout the day and a welcome party featuring hip hop legend DMC of Run DMC. 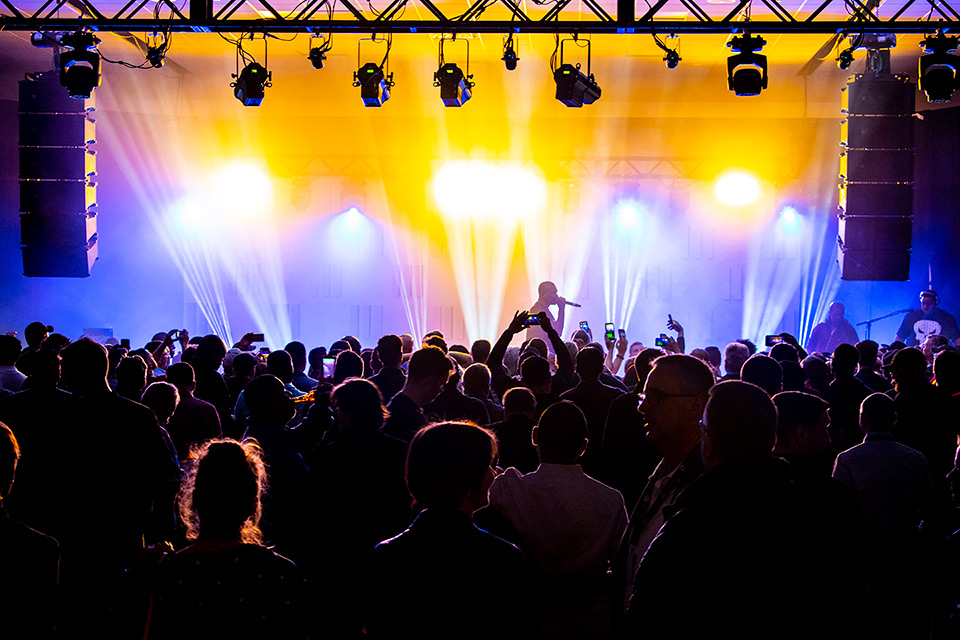 The 23rd annual Mobile Beat DJ Conference welcomed hundreds of delegates for four non-stop days of educational presentations, equipment showcases and evening networking parties. The keynote seminars as well as the Monday evening party were hosted on an impressive stage in a huge ballroom at the Tropicana’s Convention Center, featuring a lighting rig designed and programmed by ADJ Product Specialist Edgar Bernal.

Edgar used a selection of ADJ’s flagship products and brand new fixtures to create a flexible rig that could be used both to highlight the guest speakers during the day and help to get the party started at night. These were arranged across two trusses – one positioned behind the stage and the other hung above the audience – and also lined up along the back of the stage. This allowed Edgar to illuminate the speakers and performers on stage, create static ‘warmer’ looks that set the tone for the conference and then generate engaging mid-air beam and ‘eye candy’ effects for the evening party.

While the lighting rig was essential to the success of the daytime conference, ensuring that the speakers could be clearly seen by the huge audience from all angles, it really came into its own for the Monday evening ‘Mobile Beat Signature Party’. In addition to a headline set from Darryl ‘DMC’ McDaniels of seminal hip hop group Run DMC, this featured three supporting performances. South Florida duo Oddballaz kicked the night off with a showcase of their hip hop with a pop twist sound. Next up were Ent Distrikt with a high energy set featuring their line dance single ‘Same Ole 2Step’ and a dancing fox who joined them on stage! The final special guest performance was from none other than DJ Casper, who performed his unmistakable hit, the Cha Cha Slide, and invited a number of members of the audience up on to the stage to show off their dance moves!

The headline performance from DMC didn’t disappoint, packing in hits including ‘My Adidas’, ‘It’s Like That’ and ‘Walk This Way’. It was this culminating part of the event that Edgar used as inspiration to design his lighting rig. “When I found out that DMC of the legendary Run DMC was going to be the headlining performer, I knew I had to specify the best fixtures that ADJ has and program a good selection vibrant looks to create a dynamic backdrop for what I knew would be a high energy show.”

For key light Edgar used four of ADJ’s potent Encore Profile 1000 Color LED-powered ellipsoidals, alongside eight ADJ Saber Spot RGBW fixtures for color washing, which ensured the performers were well illuminated wherever they moved on the large stage. “I wanted to make sure that the artists would look great from the audience,” explains Edgar. “I was able to achieve an excellent warm white from the Encore Profile 1000 Colors and could see, from people taking photos in the crowd, that DMC looked great!”

Edgar was also prepared even if the action temporarily moved off stage. “DMC’s performance was electric, as I knew it would be, and since I also knew that he often likes to get out in to the crowd I wanted to be ready. For that reason, I had eight of the ADJ Vizi Q Wash7 fixtures rigged to the front truss. With their motorized zoom function, these could be used for beam effects for some of the show but then when I needed to light the crowd and make them part of the show I could.”

Four of ADJ’s versatile Encore Burst 200 fixtures were positioned along the truss at the back of the stage to provide backlight, audience blinder and strobe effects at different points throughout the event. “Dimmed low, the warm white LEDs provided an excellent back wash,” confirms Edgar, “then, when I needed the blast and randomized strobing for eye candy, these units really delivered!”

For profiles, Edgar utilized four of ADJ’s brand new Focus Spot 4Z fixtures alongside four ADJVizi Hybrid 16RX and eight Vizi CMY 300 units. These allowed him to create a wide variety of vibrant colored beam effects and sharp GOBO projections. He made use of the rotating prisms offered by all three fixture types as well as the hybrid beam, spot and wash functionality offered by both of the Vizi models.

To enhance these moving beam effects, Edgar deployed two of ADJ’s Entourage faze machines, one on either side of the stage. Then, to add additional impact when DMC entered the stage, ADJ’s new Entour Ice low-lying fog machine was also put to use. “The Entourages are so powerful that I only had to run them at around 30% to maintain the perfect atmosphere for the whole night,” enthuses Edgar. “This was my first time using the Entour Ice on a show, and I have to say I was very impressed. The low-lying fog effect was nothing short of spectacular and its DMX control feature meant that I was able to cue it perfectly to when DMC entered the stage!”

To complete the stage setup, 16 of ADJ’s high resolution AV2 LED video panels were arranged into two separate screens that provided facades for a pair of on-stage DJ booths, one for the event’s resident performance DJ, Jason Jani, and the other for DMC’s tour DJ. These were used for animated visuals as well as to display the performers’ logos, and were setup with a 5-degree horizontal angle between panels to give the screens a convex shape which helped them to be seen from all around the large room.

The combination of natural-looking key lighting, sharp beams, potent strobe/blinder effects, crisp video and powerful atmospheric effects set the stage for a fantastic Mobile Beat Las Vegas Show. ADJ was proud not only to showcase its latest professional lighting, video and effects equipment, but also to support mobile entertainers who came to the conference to learn, grow and ultimately push their business forward.