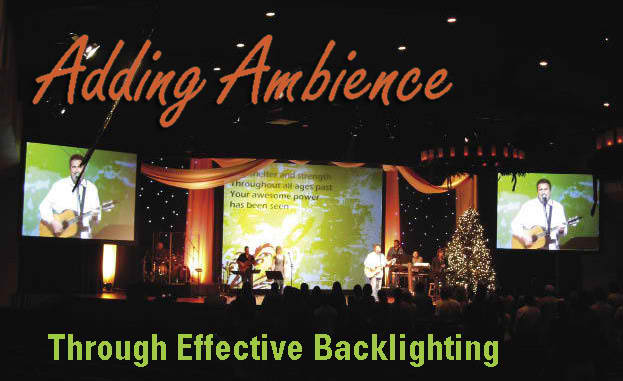 Our environment has a great impact on our emotional state, although we often don’t realize it. Imagine driving through a gritty industrial park on a dark, cloudy day while rain drizzles down. Imagine the same gritty industrial park, but now picture a late summer evening, as the sun sets behind the towering cumulous clouds. Lightning flickers within the depths of the clouds as a storm moves in. The industrial park is the same, but the way it is lit can completely change the way you perceive it. In a church, the lighting used in the auditorium and on the stage has just as much impact on the way your audience perceives the service. Let’s assume that your venue already has basic lighting on the platform or stage so that your pastor and worship team are clearly visible, even when the house lights are dimmed. How can you use lighting to help set the appropriate tone and mood for the service?

Backlighting is one of the most effective ways to add ambience to a worship service. For the purposes of this article, we will consider any light which is mounted in front of the stage as “front” lighting, and any light which is above or behind the stage as “backlighting.” Front lighting is essential for basic illumination, and is also useful for “washing” the stage with color. Once the basic illumination is present, back lighting can be used to add color and set the atmosphere of the stage. Backlighting can be as simple or complex as your budget and time will allow, and many worthwhile effects can be achieved very easily. 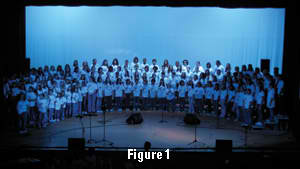 Just about any type of fixture can be used for backlighting. The cheapest and most common is the PAR can, which produces a soft-edged beam of light. The beam width can be changed, but this requires replacing the lens on the fixture. A Fresnel fixture is more expensive, but provides a wide, uniform pool of light. Fresnels are excellent for producing a color wash. Ellipsoidal reflector fixtures (also known as “lekos”) are even more expensive, but they provide the most control. They can be focused to provide a tight, hard-edged beam or a more diffuse wash, and shutters can be used to precisely trim the edges of the beam. All conventional fixtures can be used to add color, by mounting a colored gel at the front of the fixture. Only ellipsoidal reflectors offer the ability to use gobos to project patterns onto the stage.

More recently, LED fixtures have begun to replace PAR cans and fresnels for adding color to the stage. LEDs have several important advantages over conventional fixtures. Most LED fixtures have three or more colors of LED, so the color and intensity of the light can be digitally controlled. LEDs do not require a separate dimmer, while all conventional lights must be connected to a switch or dimmer to control them. On the other hand, a digital control console must be used to take advantage of these features. Intelligent lights are the most flexible option for backlighting, but also the most expensive and complex. The more expensive intelligent lights can fulfill any of the roles described above.

The photos illustrate several types of backlighting. The most basic use of backlighting is to create a uniform wash of color across the stage as in figure 1. Fresnel or LED fixtures, mounted above or to the side of the stage, are ideal for color washes.

PAR cans can also be effective in backlighting. Figure 2 shows the soft-edged beams from PAR cans mounted above the stage. Notice how the yellow tone on the black curtain at the back of the stage, which is the result of PAR cans shining upwards from the floor. Haze was being used when these photos were taken. Without the haze, the overhead PAR cans are still useful, but the effect is not as dramatic.

White backdrops and set pieces stand out when lit with colored light as in figure 3. Sheer white curtains are one easy way to construct a backdrop that is suitable for colored lights. The set pieces in figure 4 are made from white craft foam, and lit from below with inexpensive LED panels. The LED panels have the advantage that one panel can produce a multitude of colors, whereas a cluster of a dozen par cans with different colored gels would be required to achieve the same effect.

Backlighting can be used in many different ways to enhance a service. For example in figure 5, musicians are playing an instrumental piece while people walk into the auditorium. Backlighting is used to provide ambience on the stage, and the front lights are only brought up when the worship service begins. A different use of backlight is shown in figure 6. The worship leader is caught in the intersecting cones of cold white light from four intelligent lights, two of which are on the stage floor behind him. Once again, haze enhances this effect. White backlights can also be used to create a dramatic effect in conjunction with a front color wash. For example, the stage can be washed with a deep blue, while individual musicians are silhouetted from behind with white or amber light. Another idea is to mount backlights so they project color off the stage onto the walls and ceiling of the auditorium (being careful not to blind the audience). This technique extends the “feel” of the stage out into the audience.

When recording or broadcasting video from a service, remember that the image sensor on a video camera has a much lower dynamic range than the human eye. This means that the eye can simultaneously perceive many more levels of brightness than the camera. When a vocalist at the front of the stage is brightly lit, your eye can clearly make out the musician behind him who is lit with a dim blue light. However, the musician will hardly be visible to a video camera which has the aperture adjusted for the brightly lit vocalist. Therefore, it may be necessary to make the brightness level across the stage more uniform when the service is being videotaped. For example in figure 6, notice that the brightly lit vocalist is “washed out”. This is because the camera aperture and exposure time are adjusted for the more dimly lit musicians in the background. A similar problem will occur on video.

Inexpensive LED fixtures can also cause problems with video recording. LEDs cannot be dimmed by reducing the voltage like an incandescent light, so they are dimmed by pulsing the lights on and off very rapidly. Your eye cannot perceive this pulsing, but it may show up as a flicker on camera if the pulse rate is too slow. Cheap LEDs may have to be run at full intensity when they are directly visible to a camera. 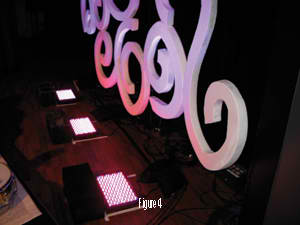 Backlighting is a powerful technique in lighting design. Even the most basic and inexpensive fixtures can be used to create effects that maximize the effectiveness of worship or other service elements. Never underestimate the power of lighting to enhance the way people experience your church. •

Craig Finch is a volunteer lighting designer for Discovery Church in Orlando, FL and occasionally does freelance work in stage lighting. His web site is http://www.shocksolution.com/lighting/