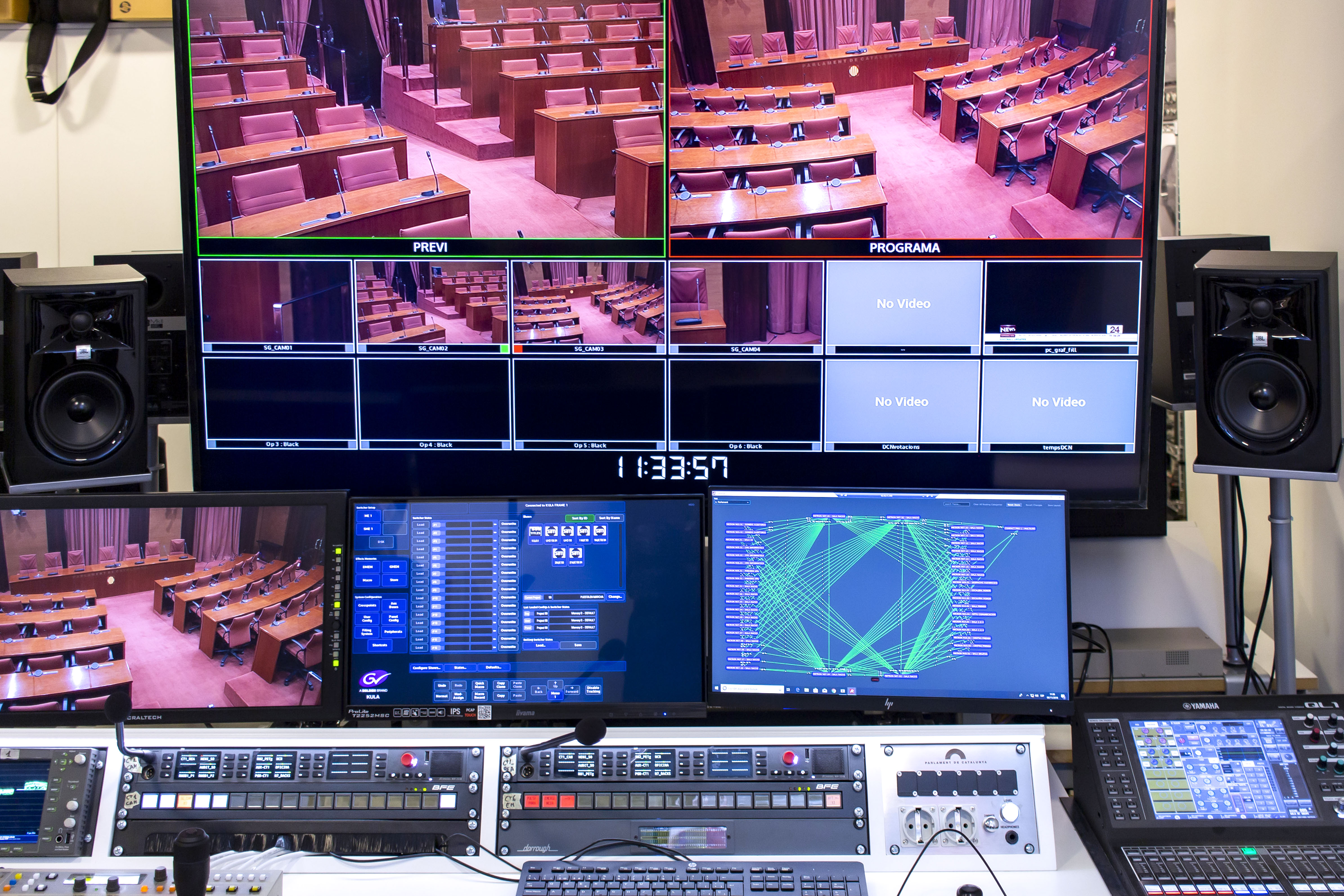 The Parliament of Catalonia in Barcelona has installed a comprehensive signal routing and communications backbone based on Riedel’s MediorNet real-time signal transport, processing, and routing technology, together with the Artist digital matrix intercom and Bolero wireless intercom. The new networking infrastructure is a core element in a multiyear HD upgrade of the Parliament’s video recording and broadcast capabilities.

The Parliament of Catalonia is the unicameral legislature of Spain’s autonomous community of Catalonia, occupying a historic, 300-year-old palace in Barcelona’s Ciutadella Park. Since 2002, the Parliament has been producing its own institutional television signal and making it available, free of charge, to media outlets.

For the wholesale migration of the video operation to HD, the Parliament had several complex requirements. Although the installation would initially be based on 1080i, the goal was to adopt technologies that could be easily migrated later to 1080p and 4K production in an IP-based operation. In addition, the signal distribution mechanism would need to support existing workflows in the Parliament building, which are based on nodes distributed throughout the facility and connected by fiber optics. The project hinged on the ability to transport large numbers of decentralized signals in an effective and financially viable way, with future-proof technologies that could serve the Parliament well for at least a decade.

“Even in the project’s early stages, it was clear that Riedel’s MediorNet would be perfectly suited to our needs in terms of flexibility, decentralization, and the ability to transport and route signals over fiber. MediorNet also gives us the guarantee of a smooth transition to IP in the future, with the reliability and proven success of a solution that’s well-established in the market,” said Daniel Rodriguez Carvajal, Audiovisual Technician, Parliament of Catalonia. “MediorNet’s ease of use, management, and plug-and-play capabilities are also big plusses. In fact, we think of MediorNet as a type of ‘Swiss Army knife’ – it’s incredibly versatile, and we have had absolutely no system failures since we went live with the new infrastructure.”

Thanks to close collaboration between the Parliament audiovisual staff, the Riedel team, systems integrator Telefonica Servicios Audiovisuales, and Riedel’s partner Crosspoint, the new signal infrastructure was deployed in record time. Barely four weeks after the deployment began, the installation operated flawlessly for its first event, a ceremony to present the Parliament of Catalonia’s Medal of honor on the National Day of Catalonia. Essential to this production were the Artist wired intercom system, which also acted as a simple audio monitor, and the easy-to-use Bolero wireless intercom, which enabled the audiovisual staff to communicate seamlessly and reliably.

“Riedel’s MediorWorks interface is used on a daily basis for monitoring and controlling crucial operations within the Riedel distributed matrix at an engineering level, and it offers ease and immediacy in the technical monitoring and detection of errors that are vital to our operation,” said Rafael Ramón Martín, Image and Sound Technician for the Parliament of Catalonia. “Even with an electrical shutdown of the entire infrastructure, MediorNet just switches off and then switches back on, and everything works perfectly.”