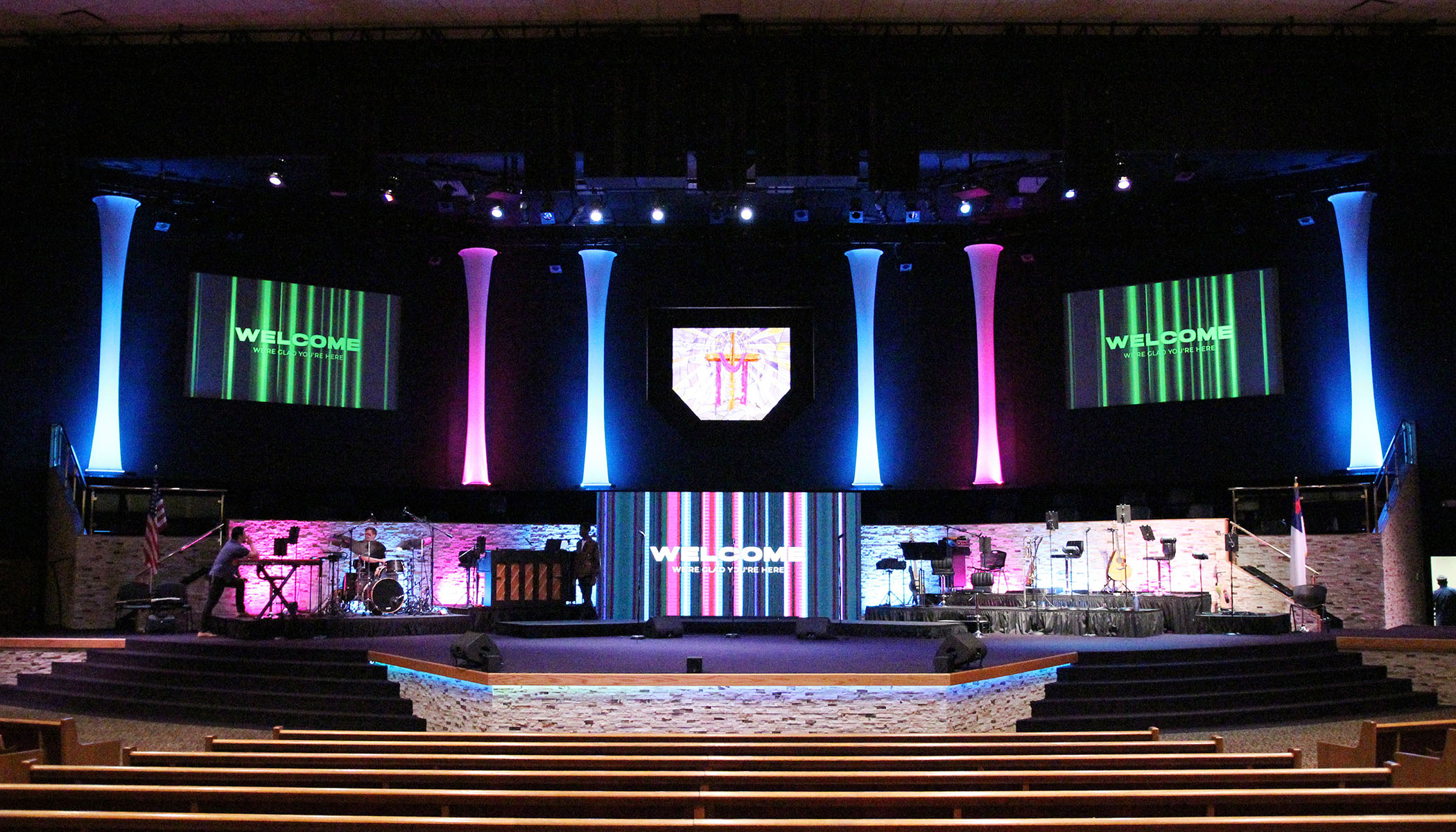 Sometimes, you just have to make the leap of faith. Princeton Pike Church of God, in the northern Cincinnati suburb of Hamilton, Ohio, has been around since 1928, and its worship spaces have continually grown over the years. But by the time the congregation began meeting in its newest sanctuary—nearly 3,000 seats in 2001—it had become clear that its sound reinforcement systems were not keeping up. So, this year, as part of a sweeping upgrade of all its campus audio facilities, Princeton Pike Church of God chose to adopt L-Acoustics L-ISA immersive sound technology for its main auditorium.

The decision to go with L-ISA was easy: an immersive system to improve the acoustical and emotional connection between the large stage and the fan-shaped seating area was a strong reason. And the fact that the cost of an L-ISA setup for a venue of its scale was nearly equivalent to that of a conventional stereo sound system reinforced the decision immensely. But the main reason that Princeton Pike Church of God made the move to immersive: it was simply time.

“The system we replaced was the original install from 21 years ago, and we wanted something forward-thinking enough for the next two decades—not ‘bleeding-edge’ technology, but proven state-of-the-art, which is what L-ISA offered us,” says Princeton Pike Church of God Production Director Eric Chancey. “We also didn’t want to look back and think we’d missed the boat. The difference in cost between the L-ISA-based design and a standard left-right stereo system for us was barely five figures. Our church board looked at the numbers and realized that this is where church sound is going. We didn’t want to be a few years down the road asking ourselves why we didn’t do this.”

Chip Self, owner and CEO of Cignal Systems, the AV systems installation division of St. Louis-based Logic Systems that integrated the L-Acoustics system, presented the church board with several options, including one in which the L-ISA loudspeaker configuration could be installed but used in a conventional manner, with immersive implemented later on. “But I had a feeling that Eric and the church would feel good about going with immersive,” he says. “They did, and it’s been a great move for them since.”

The church’s new house sound setup, installed earlier this year, is made up of seven Scene arrays, the centermost five each being comprised of three A15i Focus flown over a single A15i Wide. These are flanked by two more Scene arrays of three smaller A10i Focus over one A10i Wide, with Extension arrays of one A10i Focus over two A10i Wide hung even farther out. All A15i and A10i systems are suspended using custom-engineered and fabricated Logic Systems exoskeleton plate systems.

Additional loudspeaker systems include left and right out-fill arrays of two A15i Focus over two A15i Wide, 13 ultra-compact 5XT coaxials spread out across the stage lip for spatial front-fill, five X12 stage wedges, a dozen flown 12KS21i subs, and 12 LA4X and seven LA2Xi amplified controllers. This is all controlled via a brand-new L-ISA Processor II that was purchased with a standard 16-output licensing level to best match the church’s relatively modest production needs and significantly minimize the cost of entry into an immersive system.

Onstage, a pair of KLANG:vokal 3D in-ear monitor mix processors provide up to two dozen individual mixes at 48 kHz and 96 kHz via KLANG:kontrollers for wireless IEM monitors. “This was a huge leap of faith into immersive sound,” says Self, “not only the L-ISA-controlled PA system but also the KLANG 3D monitoring. Moving into immersive with one system is a huge undertaking, particularly for a house of worship, but to do so with a second system is really taking on a lot—they literally went from mono to the cutting edge of sound. But they also realize that immersive audio is the way forward for churches.”

Self says he’s pacing the training for the church on both systems. “We are easing into what is a big tech change for the church, but we’re also finding that the tech staff loves it,” he says. “On one level, it’s more complicated, but on another level, they’re finding that they don’t have to make allowances for the elements in the sound, such as carving out EQ for certain things. With L-ISA, everything has a place. As a result, volunteers are finding it easier to mix. There’s way less use of EQ and dynamics, and the sound breathes more.”

Chancey says that L-ISA put Princeton Pike Church of God on a path to the future but also fit all the church’s physical needs. “We have a large, wide stage and a large, wide seating area, and L-ISA helps us localize sounds within those spaces,” he explains. “The same goes for using KLANG monitoring. Once you’ve been able to mix in that kind of environment, it’s hard to go back to conventional stereo sound. We were a little apprehensive about going into immersive sound, but now that we’ve experienced it, L-ISA has made a believer out of me.”

For more info on Princeton Pike Church of God, visit www.ppcog.com. Cignal Systems and Logic Systems can be found online at www.cignalsys.com and www.logicsound.com.