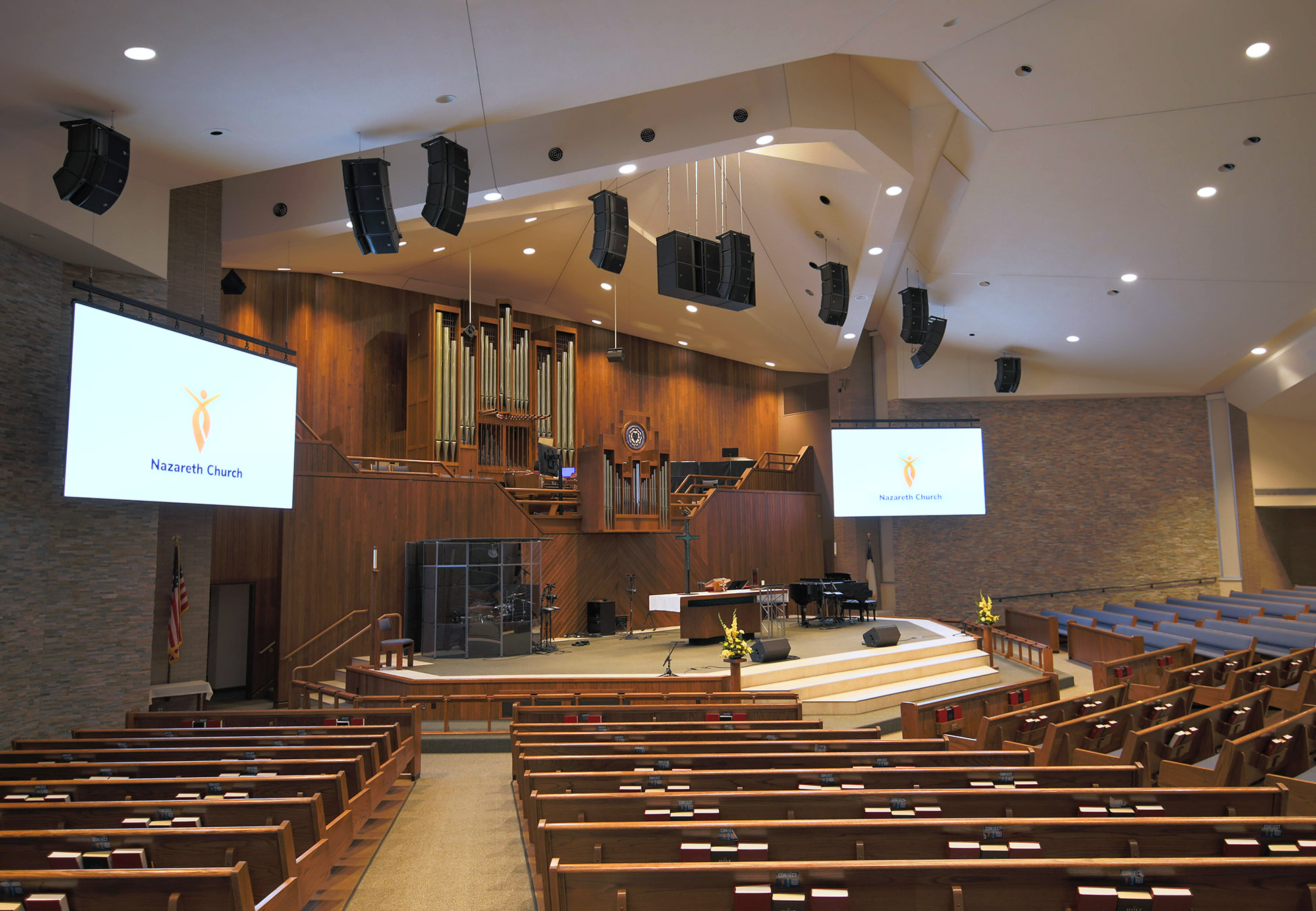 Established in 1871, mainly by the diaspora of Danish farmers flocking to Cedar Falls, Iowa, for the territory’s fertile soil, Nazareth Lutheran Church has undergone various changes over its past 150 years. Like many other houses of worship, one of those updates was a choice to host both traditional choir/organ and contemporary worship services on Sundays to better cater to parishioners’ preferences in worship style.

Just this year, Nazareth Lutheran sought to stay current in another way—by updating its PA system to one that would not only deliver exceptional sound for both musical genres but also position the church for its next generation of worshipers. That decision was made manifest with the installation this summer of an L-Acoustics immersive sound system featuring the new L-ISA Processor II, which was critical in bringing the next generation of sonic technology to this mid-sized church.

In many ways, the new L-ISA setup addresses the acoustical challenges of this type of traditional church architecture but does so with the future very much in mind. A combined total of 23 L-Acoustics A10i Focus and 11 A10i Wide loudspeakers comprise the five Scene arrays flown across the front of the stage, two Extension arrays, and two out-fill arrays, buttressed by six KS21i compact subwoofers flown in a center hang. Five compact 5XT enclosures are installed across the back edge of the balcony to cover its last several rows, and seven LA4X amplified controllers power the entire system.

An L-Acoustics LS10 10-port Milan-AVB switch acts as the network interface for the system, while a MADI card in the dLive mix engine connects the console to the PA. L-ISA Controller software runs on a separate computer at the FOH position to manage the system’s object-based immersive mixing, while the console is used for level and dynamics control, making it simple to understand and master, even for the church’s largely volunteer tech team. It’s a system designed to take the church’s audio technology decades forward.

“The first order of business was to design a sound system that would address the church’s dynamic range of worship types,” says Marc Breda, Project Lead for Vantage Pro. “The pastor wanted that, but he also wanted the system to be ready to take the ministry into the future.” That’s not surprising, given that Cedar Falls is also home to the University of North Iowa, where over 10,000 students are enrolled. “They wanted a system that would also engage a younger generation who have become accustomed to sophisticated sound. L-ISA accomplishes that,” he says.

For Nathaniel Parrish, the church’s Music Director, the sonic transformation that the new sound system brings to Nazareth Lutheran is profound. “Our L-Acoustics speaker system has been such a huge improvement in clarity and fullness,” he shares. “We recently had an event with 25 singers and musicians on stage, and it sounded great. We never could have pulled that off with our old sound system.”

And that sentiment is echoed by those out in the seats, including the one that typically sits at the FOH mix position. “In my 20 years of experience as an audio engineer, the biggest hurdle I’ve had to overcome was the switch from analog to digital. Making that move was one of the biggest game-changers in the way I mix, and how I mix in churches and for different events,” says Audio Contractor Dan Olsen. “Now, however, the next big change is in front of me each weekend, and that is L-ISA from L-Acoustics. The way that I can place my orchestra and choir in a different space than the lead vocal and lead instruments helps create a space in our environment that is such an incredible boost to the overall sound of my mix. The ability to move objects on the fly, or to build presets depending on what group is coming in and how often, has been very easy. It’s fun to create something I’ve never been able to create with any other system.”

While Nazareth Lutheran Church is forward-thinking, it’s also realistic when it comes to finances. The 1,200-seat church is relatively mid-sized and budget-conscious. That’s why the arrival of the L-ISA Processor II late last year made all the difference. With the new product’s scalable licensing options, Nazareth Lutheran could pick an output tier that perfectly matched its production needs, significantly keeping costs down. That, combined with the specification of L-Acoustics A Series enclosures—particularly the smaller A10i—made choosing this system an easy decision for the church.

“The new L-ISA Processor II puts the concept of immersive sanctuary sound in much closer reach for churches like this,” adds Breda. “They’re running a 64-channel audio system there, so it’s not a massive production. But their Sunday programming is very dynamic, and they wanted to engage their audience well for all types of programming, as well as prepare the church’s sound for the future.”

“The new processor came along at just the right moment for them,” adds DeJong, “and for what we think will be many more mid-sized churches, too.”