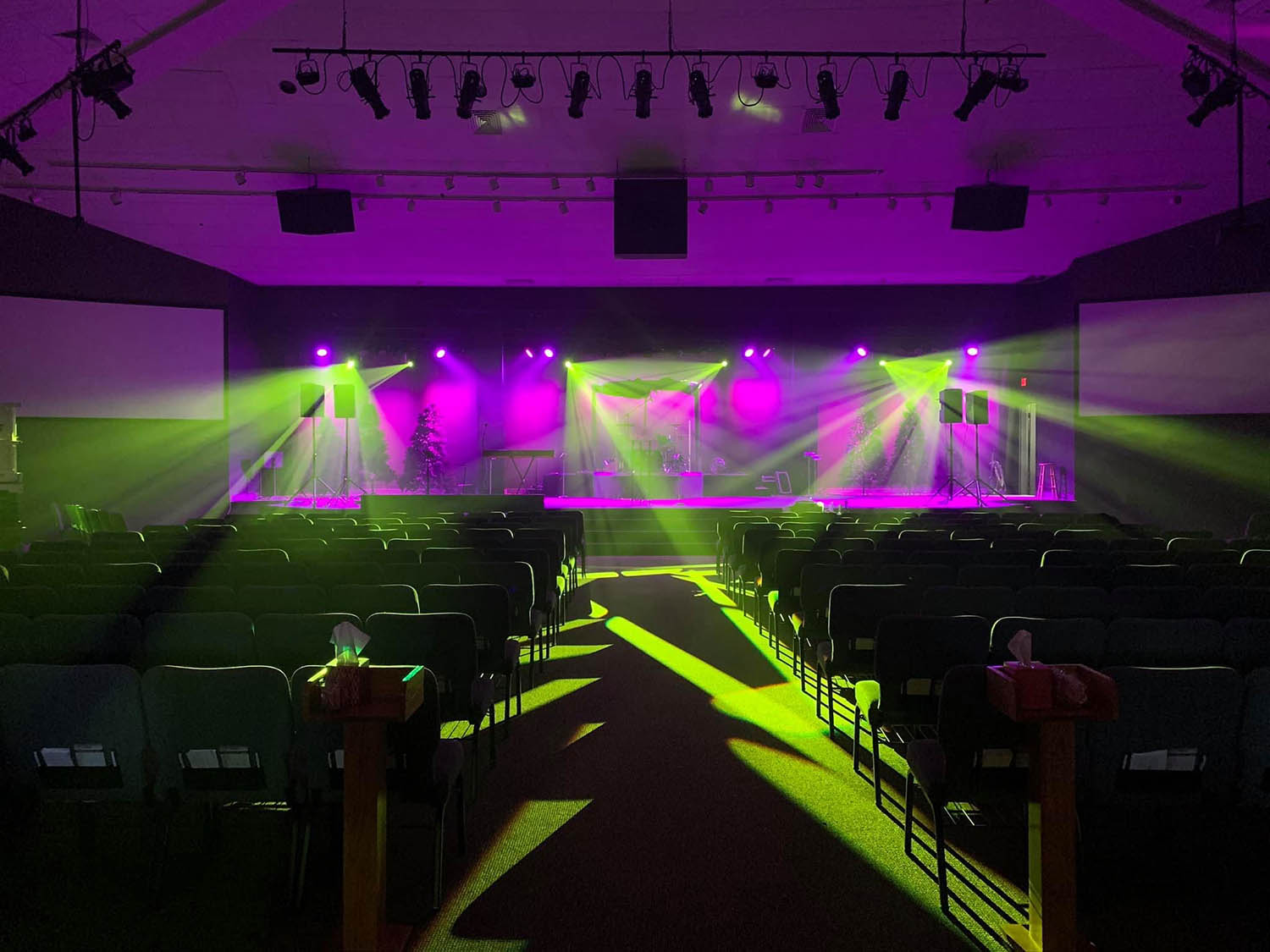 Love Joy Church has been serving the spiritual needs of its Buffalo, New York congregants since the early 1980s. It has grown considerably from its modest living-room-based, Bible-Study roots and today occupies a beautiful 600-person sanctuary in Lancaster, a suburb of Buffalo. Love Joy’s upbeat services and talented praise band are the heart and soul of its diverse ministerial activities. However, until recently, Love Joy’s congregants regularly complained that speech and lyrics were difficult or impossible to understand. Local AV design and integration firm TSH Audio fixed the problem with new Danley Sound Labs loudspeakers and subwoofers that leverage Tom Danley’s patented designs to deliver speech and music that is clear and impactful.

“The existing sound system at Love Joy Church was dated and the design didn’t work for the space from the start,” explained Timothy Harris, the principle and design engineer for TSH AV. “The coverage was minimal, and there were a lot of boxes at the front of the stage to compensate. But as often happens, more was less. Many people couldn’t hear the message, but if they turned the system louder, other people complained that it was painful.”

It was only a year after TSH AV launched that Harris discovered how successful a Danley design could be, and Danley continues to be his first choice whenever possible. “Sure, line arrays don’t always fit the bill,” he said. “But there’s also the pure and simple sound quality of a Danley point-source system. Tom Danley’s designs are amazing – multiple drivers combine to produce volume, but all of the frequencies leave the horn perfectly in phase. Beyond the designs, the people at Danley, and the principles they run their business by, are fantastic. It’s a very open and warm company. Skip [Welch] is always there to provide a demo or to help out with logistics.”

Harris modeled Love Joy’s rectangular sanctuary using Danley’s Direct modeling software. “Danley Direct allowed me to identify any potential overlaps or phasing issues,” he said. “Love Joy’s situation was pretty straightforward, however. They mainly needed clean, point-source audio to every seat for intelligibility of vocals and spoken word. For most churches, that’s the biggest deal. The model also gave the decision-makers at Love Joy peace of mind because it allowed them to visualize the changes we were proposing.”

Love Joy Church’s new system centers on a stereo setup of four Danley SH50s. Two SH50s are close-packed on each side, delivering 100 degrees of audio with completely phase-coherent audio from one side to the other and zero seam in the middle. A beefy Danley BC412 subwoofer hangs between the SH50s to deliver soul-stirring low end (“enough low end for days and days,” in Harris’ less technical estimation). A new Allen & Heath SQ-6 digital mixer controls the system and connects via Dante to a QSC Q-Sys Core 110, which in turn connects to two QSC CXD-series four-channel amplifiers. One amp runs the four Danley SH50s, and the second runs the Danley BC412. Acoustical Fulfillment diffusers and absorbers round out the sanctuary sound reinforcement system.

“The improvement over their old system is night and day,” Harris said. “They can run the Danleys significantly louder because their lack of distortion allows it. So, they have more musical impact. And everyone can understand every spoken word and every lyric.” This fall, TSH Audio will install a new Danley sound reinforcement system in Love Joy Church’s children’s wing. A stereo pair of Danley SM60F full-range loudspeakers and a Danley THmini15 subwoofer will give the Love Joy youth the same intelligibility and impact delivered in the larger sanctuary system.