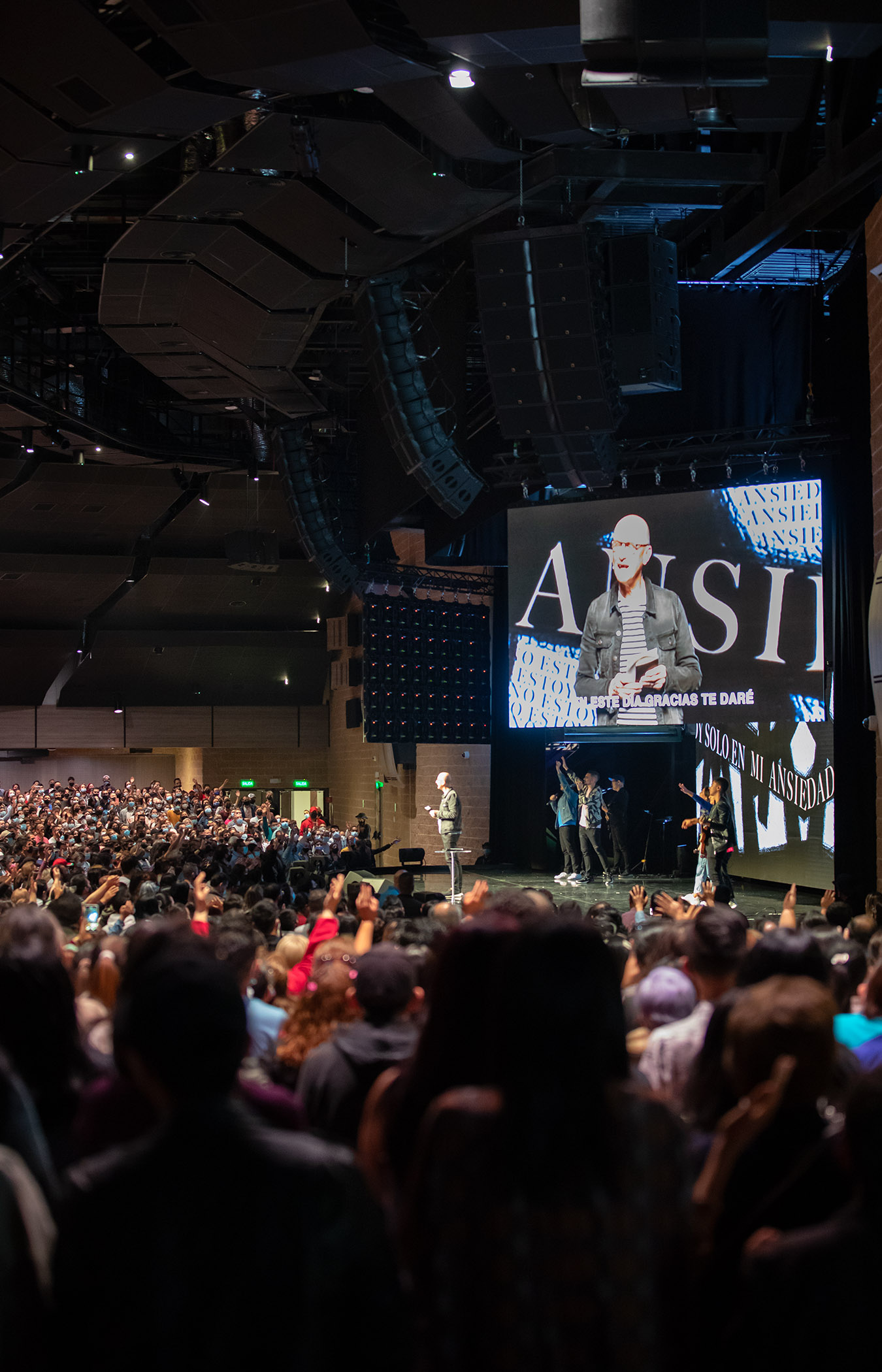 The Suba district of Colombia’s capital city of Bogotá is celebrated for its inclusiveness, home to all social classes and Colombia’s indigenous peoples. It’s also where Iglesia El Lugar de Su Presencia wanted to make sure its message would be clearly heard and understood by everyone filling the nearly 4,000 seats of its newest church location. Following an onsite comparative evaluation of four brands of loudspeaker systems—and later witnessing the clarity of the L-Acoustics K2 arrays in use at Christ Fellowship Church in Port St. Lucie, Florida—El Lugar de Su Presencia chose L-Acoustics for its Suba campus, which just celebrated its grand opening on February 20.

Bogotá-based AVCOM, an L-Acoustics Certified Provider for install (CPi), integrated a full complement of L-Acoustics K, A, and X Series loudspeaker systems at the new church, which was constructed on the site of a former mall that had been leveled to make way for the beautiful worship space. Like many other projects, the Covid pandemic delayed work on the entire facility; the L-Acoustics system components were actually delivered onsite in June of 2020, but assembly couldn’t commence until a full year later. In the meantime, AVCOM worked closely with L-Acoustics House of Worship Applications Project Manager Josh Maichele and Alex Soto, L-Acoustics Applications Engineer for Latin America and The Caribbean, using the manufacturer’s Soundvision software to design, implement, and calibrate a system that would fulfill the church’s high expectations.

First established in 1993 in the home of Founding Pastor Andrés Corson and his wife, Rocío, El Lugar de Su Presencia has exploded its reach to more than 42,000 congregants across multiple sites since then. Wanting to minimize the distance between the stage and seats in its new Suba sanctuary to best preserve intimacy and connection, the church opted for a fan-shaped house design—a layout that could potentially complicate audio coverage. “We decided on a combination of K, A, and X Series speakers that would give us a completely customized solution to cover the entire seating area evenly and uniformly,” says AVCOM Live Application Specialist Marco Pineda. “The church’s audio tech director wanted no more than 3dB SPL variation to any seat, front to back and side to side, as well as even distribution of the low frequency energy, and L-Acoustics had an answer to every question in the system design.”

The church’s new loudspeaker system features four arrays of six K2 plus three Kara down-fill enclosures, with three KS28 subs flown behind each hang and eight more KS28 arrayed on the ground. Ten short-throw coaxial X8 serve as front-fills along the lip of the stage. Six A10 and two X8 are flown as under-balcony fills, with three A15i delay out-fills complementing the far back corners. A total of 28 amplified controllers power the entire system: 21 LA12X for the mains, out-fills, and subs, and seven LA4X for everything else. Three L-Acoustics P1 processors, paired with the M1 measurement tool suite and controlled via LA Network Manager, as well as three Avnu-certified LS10 AVB switches are also integrated into the system. All audio runs on Milan-AVB for the main signal, with AES/EBU and analog available as fallback signals.

“The room was built very well, with great attention paid to its acoustics,” Pineda says. “The real challenge was the layout of the seating. For the pastor, it’s all about making sure everything can be heard clearly by everyone. He wanted a lot of presence and clarity, and that’s what this system delivers. The main hangs of K2 offer tremendous presence and power without being overpowering, and the A Series and X8 are the perfect fill speakers for this room. There is actually no more than a 2dB variation in SPL throughout the seats, so no matter where you sit, you hear everything, and you hear it clearly.”

Church Audio Tech Director Juan Pablo says the new and larger location required a bigger and better PA system. “This campus has an important area to cover, and we wanted a PA system that could bring the worship experience to a new level,” he explains. “We also wanted a PA system where the voice could be heard warm and soft, but at the same time could be able to cover every seat, without losing the deep round low-frequency sound that we like.”

He notes that after hearing the various systems presented to him, the pastor didn’t hesitate in choosing L-Acoustics—and Pineda adds that everyone who has experienced it so far has been impressed. “The pastor is very pleased with the system and he’s been receiving many good comments about the sound,” he says. “I can tell you that every person from the church that has heard the PA has been amazed by the coverage, clarity, and warmth from the K2,” he says. “They’re also very happy about the precision and punch, right down to the lowest frequencies from the KS28 subs.”

Pineda also points out that L-Acoustics remedied another challenge the church had faced: the difficulty in getting spare parts for its previous sound systems. “L-Acoustics support is fantastic,” he says. “Parts, advice, help, is just phone call or email away. “We wanted a better sound system for the church. What we got was a better partner for sound.”