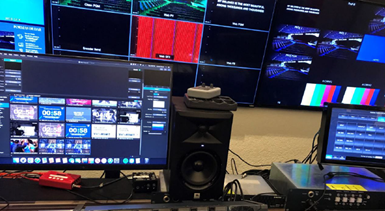 King Jesus Church in Miami, Florida is taking their production to the next level with a recent upgrade to their Clear-Com® intercom system. The upgrade incorporated their existing Clear-Com Encore® analog partyline intercom system and now additionally includes an Eclipse® HX digital matrix system fitted with an E-IPA card, FreeSpeak II® digital wireless transceivers and beltpacks, HelixNet® digital partyline, LQ® Series of IP interfaces and finally the Agent-IC® mobile app, creating a dynamic and robust intercom communications system designed to support the organization’s growth with plenty of room for expansion in the future.

For over 20 years, King Jesus Church of Miami (KJM) has been highly successful with their ministry in Southern Florida, seeing attendance of 15,000 to 20,000 each week at both their main and remote campuses across the globe, spanning five continents. As the ministry has continued to grow, so has their production – broadcasting online to hundreds of thousands of followers worldwide, many of whom reside in Latin and South America. What sets this ministry apart from others is not only their Latin American roots with services spoken in Spanish, but also that they offer services in English, as well as many other languages, to engage with their followers at a global scale.

KJM’s impressive reach and continued growth has led them to surpass the capacity of their Encore partyline system, with an evolving production crew consisting of Camera Operators, Technical directors, Director, Producer, Audio Engineers, Graphics, Streaming Coordinators, and various Production Assistants all working throughout the facility. It was clear that this production required more flexibility and bandwidth from their comms.

With the goal to increase communications for today’s needs, together with room to grow for the future, Sean Sweeney from CP Communications, worked with Technical Director of KJM, Jonathan Garcia, to design an intercom system that would satisfy the modern requirements of King Jesus Church. Jonathan explains, “Communicating on Sunday was becoming more and more difficult, when you have 25 plus different people, doing 10 different things and all sharing a four-channel system… the idea of ‘controlled chaos’ comes to mind.”

In order to make the ‘controlled chaos’ manageable, Sean and Jonathan installed an Eclipse® HX Median frame with 16 ports of 4-wire and 32 IP ports on the E-IPA card, four FreeSpeak II IP transceivers and 15 FreeSpeak II beltpacks, giving them the freedom to roam the building while staying online with the production crew. Also installed was a HelixNet base station and LQ IP interface to support the Front-of-House audio and lighting crews, allowing them to communicate easily. To complete the new system, they implemented several Agent-IC mobile app licenses with an external internet connection, enabling the production crew to roam outside the sanctuary as needed, all the while still connected on comms. Together this system facilitates a modern workflow that takes into account hybrid and remote workflows.

While also producing in-person services, King Jesus Church produces and broadcasts services around the world. To help produce these global broadcasts, KJM has a broadcasting studio a few blocks aways, which is connected to the main facility over a WAN network, allowing all their communications to happen via their HelixNet beltpacks. The studio control room is outfitted with an Eclipse® HX Delta frame, V-Series Iris panels, E-IPA card, Agent-IC, and FreeSpeak II beltpacks and transceivers. Sean and Jonathan worked together to configure the system, creating a highly scalable and reliable intercom system that bridges the two buildings and allows for a seamless broadcast and streaming productions to take place.

“We now have a solid and flexible intercom system backbone for our communications that will be able to grow with us as we continue to expand our operations and broadcasting reach,” concludes Jonathan.