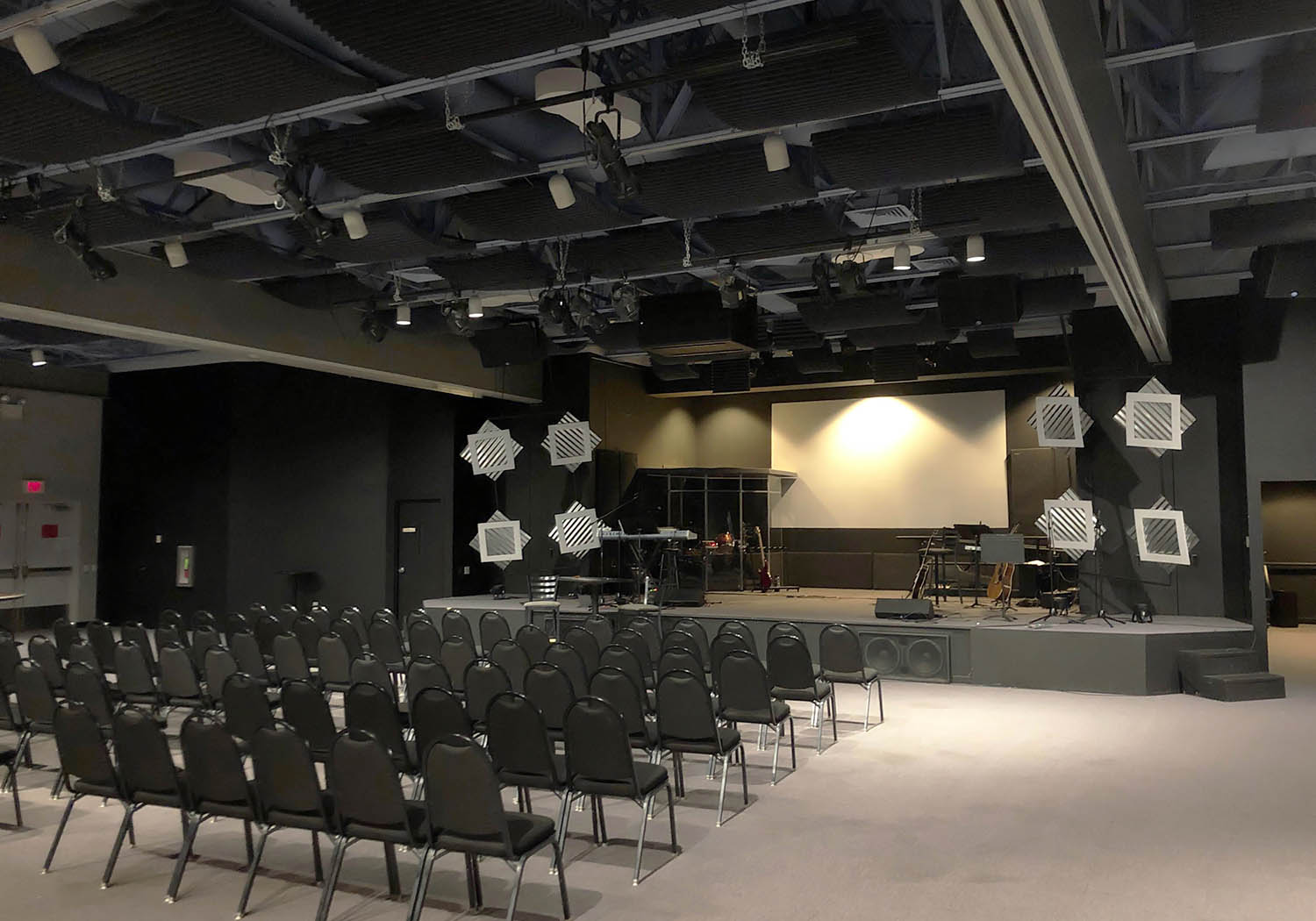 Christian Life Assembly is a thriving church in Camp Hill, Pennsylvania. Its pie wedge-shaped sanctuary seats approximately 2,000, a capacity that is met many times over during the staging of its regionally-famous Christmas pageant. However, the church struggled to deliver high-impact services and feedback-free performances. Its thirty-eight-box distributed loudspeaker system couldn’t deliver the goods. Local AVL integration firm Emmaus Media & Design came up with a plan to replace those 38 loudspeakers with just five Danley boxes, including two Danley J2-96 Jericho Horns, as well as new Danley systems in the youth and the kids’ rooms – all for less than half of what other firms bid for the sanctuary system alone.

“Danley’s well-designed point-source loudspeakers can do the work of numerous line array elements, which makes a Danley system way less expensive than a comparable conventional system,” explained Tim James, owner of Emmaus Media & Design. “On top of that, Danley’s phase coherence and fidelity make their boxes sound better than conventional designs. The pattern control is amazing. In short, Danley boxes cost way less, sound way better, and give me all the pattern control I need, so why mess with anything else?”

James served as the technical director at Christian Life Assembly for six years and thus knew the frustrations caused by the old system. “The thirty-eight loudspeakers fired straight down from the ceiling in three concentric delay rings and were original to the now-fifteen-year-old sanctuary,” he said. “The comb filtering was terrible. You were effectively hearing multiple speakers no matter where you sat. When the church was doing more choir and orchestral support, it was passable as true reinforcement, but as they asked more of it in support of more contemporary music, its worst qualities came out. The sound was indistinct and distant.”

Christian Life Assembly had been considering an upgrade for years and were finally pushed to do so as more and more of the existing system’s components failed. When the other companies that bid couldn’t come close to James’ quote, he set about designing the system he had always wished for when he was the technical director. The main sanctuary has a stereo pair of beefy Danley J2-96 Jericho Horns, each powered by its own 20,000-Watt Danley DNA 20k4 Pro amplifier with integrated DSP and model presets. A pair of Danley SH60’s provide mezzanine fill, and a single Danley BC415 subwoofer flown in the center of the room gets underneath the already low response of the Jericho Horns. Ashly DSP provides the front-end conditioning and Powersoft amplifiers power the fills and subwoofer.

That’s not the only place that Danley figures into the overhaul at Christian Life Assembly. Four Danley SM100M loudspeakers serve as monitors, giving the performers on stage the same high-quality sound that the congregants now enjoy. The youth room benefits from big-impact Danley loudspeakers: two Danley SM96s and two Danley SM60F combined with a repurposed subwoofer. Even the kids’ room – the church’s original sanctuary – has four Danley SM100 loudspeakers.

Where the old system required six tall racks of amplifiers and their own dedicated, climate-controlled room, the new Danley system only requires a single rack. James was able to move that rack closer to the catwalk, minimizing cable runs. In fact, the Emmaus Media & Design crew removed over 3,000 feet of loudspeaker wire that was no longer needed. The church has reclaimed the old amp room and is renovating it to serve as a greenscreen video production studio.

“When we first fired up the new Danley system in the sanctuary, I had to verify that the nearfields that we used to use at the mix position weren’t actually on – it sounded that present!” James said. “We were able to do away with the balcony fills and the under-balcony fills, and things sound way better in both of those locations. This was no small improvement. Everyone is thrilled. Christian Life Assembly sells over 19,000 tickets to their Christmas Pageant, and in the past, it was all the engineer could do keep the twenty open mics from feeding back. This year, he was happy to report that he was able to focus on making the mix sound good, which was all the easier with the new Danley fidelity.”