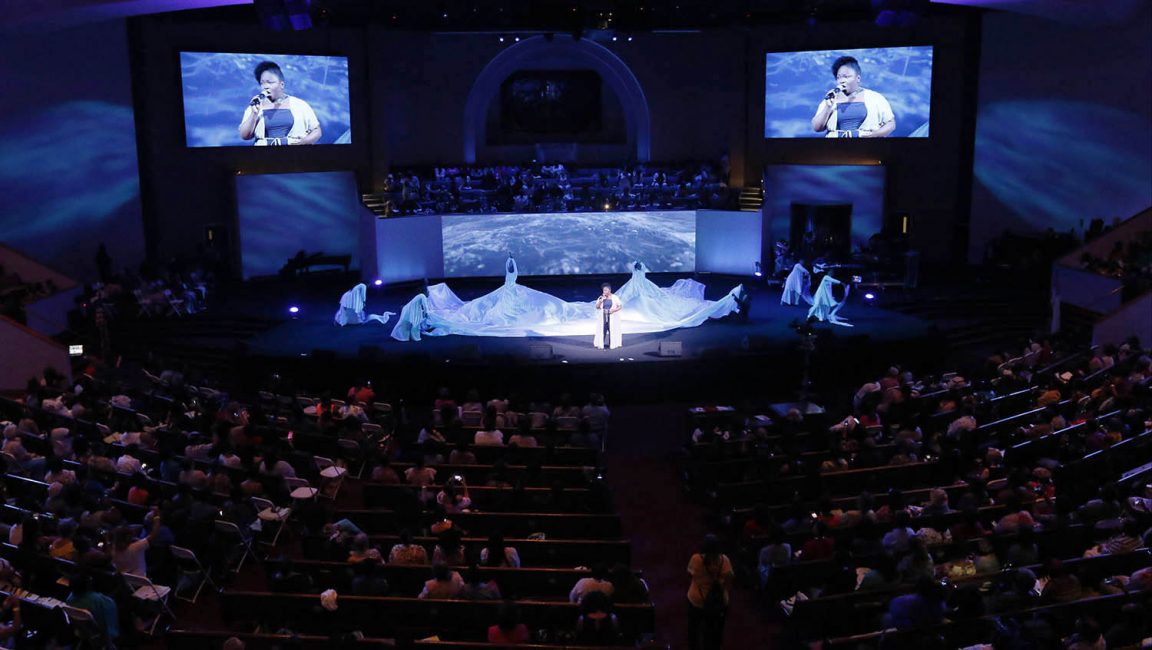 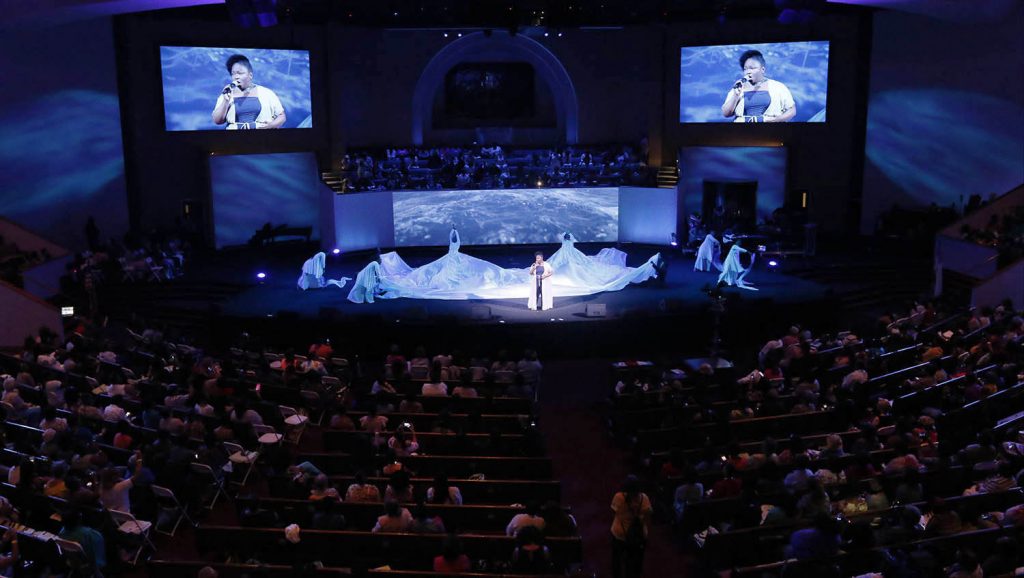 DALLAS, TEXAS: Founded in 1976 by renowned pastor and author Dr. Tony Evans with just ten members in his living room, Oak Cliff Bible Fellowship in Dallas, Texas has grown into a mission-driven mega-church of nearly 10,000 members. Its sanctuary seats approximately 3,284 people in a semi-circle with generous balconies and great sight-lines. However, OCBF’s existing audio, video, lighting, and acoustics were outdated and failing. The church called on AVL integration firm Clair Solutions, which met with church officials to determine the best path forward to meet their current and future needs. After designing a well-integrated, state-of-the-art system, the installation team at Clair Solutions turned plans into reality between Christmas and Easter. The crew worked through the week and then turned the sanctuary back over to the church on Friday so they could hold their regular weekend services without interruption.

“The existing system had been installed in 1995, and it had many things going against it. Parts were failing and, even when it worked properly, it was no longer meeting the needs of OCBF’s more contemporary services,” explained Mike Mason, regional vice president for Clair Solutions’ Dallas office. “When it originally went in, the major requirement was speech reinforcement – most of the music was delivered via organ and choir. What they needed was a brand-new system that would take them to the technological cutting-edge, so they made the decision to gut everything and essentially start over.”

Mason continued, “At Clair Solutions, our unique strengths are working with the client to realize their vision and working with the other trades – in this case the architect and general contractor – to make the installation happen efficiently. At first, Oak Cliff just wanted a tech upgrade. But we realized that to even do a proper tech upgrade, we would need to bring in an architect to do some reconstruction. And if we were already committed to doing that, we may as well go all the way and build the system that will carry them through the next phase of their mission. Importantly, we worked with the church to articulate their vision – we didn’t impose any preconceived ideas about what they should want to do. They know how they want to convey their message. It’s up to us to support that strategy, not reinvent it.”

Clair Solutions’ acoustical engineer, Justin Graybill, flew to Dallas to take measurements on the sanctuary’s sheetrock acoustics and then modeled it back at the company’s Pennsylvania headquarters. Per his design, the installation team put in full acoustic treatments for the side walls and the back wall to help with reverberation and to minimize low-end buildup under the balcony. “The goal was not to completely deaden the space,” Mason said. “The 150-person choir is (and will continue to be) a big part of the service.” Instead, Graybill specified two-foot square diffusion panels for the side walls and broadband absorption for the back wall. Thus, the acoustics are controlled and strike a lovely balance between too energized (bad for intelligibility and amplified music) and dead (bad for the chorus).

The new video systems include two 1920 x 1080 PixelFLEX LED walls to either side of the stage and a thirty-foot center screen that comes down in front of the choir loft for virtual pastor situations or, more commonly, thematic backdrops. Sony PTZ cameras, Ikegami cameras Ross video switchers, and Black Magic video processors handle all of the in-house video production as well as the church’s weekly live taping for later editing and broadcast. A Ross 64 x 64 Ultrix router allows video content and digital graphics to be routed from any input to any output. A new lighting system complements the video with over 120 new ETC ellipsoidal fixtures along with a complete moving lights package. Clair engineers built a new truss over the stage to give the church more flexibility for its larger Christmas and Easter productions.

“Throughout the installation process, we were very accommodating of the church’s needs and they were very accommodating of our realities,” Mason said. “It was understood that we took control of the sanctuary at 7:00am Monday morning, but we turned it back over to the church at 3:00pm Friday. They used a rental PA system, but the old projector screens were in a different location than the new LED screens, so we were able to keep their old video system in place throughout the process. That said, there were also times where we had to leave things in a less-than-perfect state. For example, we had to leave 100’ x 20’ of scaffolding on stage. The church just draped some cloth over it and went with it! We began the work shortly after Christmas and finished in time to debut at Easter. Across all those weeks, they never missed a Sunday service in the sanctuary!”

“It’s really great to partner with a company like Clair Solutions,” said Walter Silverberg, media director at OCBF. “Every single person we ever interacted with from Clair Solutions was professional, experienced, and very knowledgeable. I love working with Mike [Mason]; he’s deep inside our issues and really understands what we’re about. He’s taught me a lot! For example, our audio and video systems make extensive use of the in-house Ethernet network, and we recently had some inexplicable issues pop up. Mike correctly diagnosed the problem to a change that our IT department had recently made, and he helped out at a meeting between the media department and the IT department to resolve the issue. With Clair Solutions, we get deep support. They don’t just throw in some products and leave. They expect their systems to work well and to adapt, and they go to great lengths to make sure we are completely comfortable with our technology.”