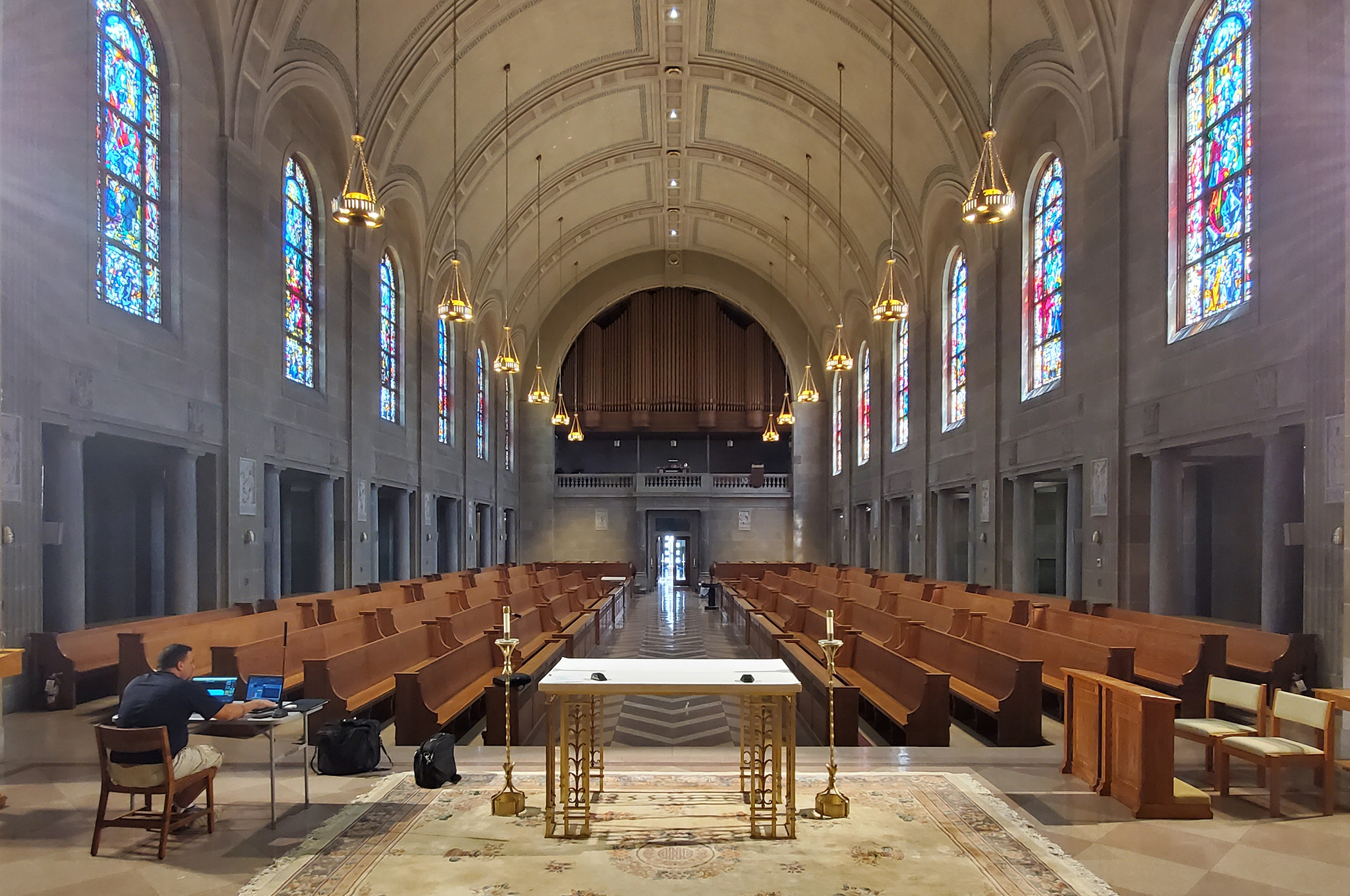 No two houses of worship are alike in the Roman Catholic Church, in terms of the architecture, acoustics and functionality. But for Monte Brothers Sound Systems, a house-of-worship audio equipment integration specialist for over 50 years, a close collaborative relationship with Audio-Technica has ensured that whatever the challenges, there are flexible wireless microphone solutions available to meet any requirement.

Having provided sound solutions for almost 2,000 houses of worship nationwide, Monte Bros. has come to rely on a handful of high quality and reliable pro audio products to meet any challenge, including Audio-Technica’s wireless microphone lines, says Monte Bros.’ Steve Minozzi. “Just in the last two years, we’ve done an incredible number of spaces using this technology — because it works.”

Two recently completed installations demonstrate the flexibility of Audio-Technica products in meeting the needs of a particular type of facility, he says. Somewhat unusually, both institutions host some of the major events that typically take place in a cathedral (e.g. ordinations), as well as the celebrations common to a parish church, such as daily liturgies, baptisms and weddings. These events and celebrations involve very different uses of the spaces, he says, making mobile and reconfigurable wireless microphone technology essential. Both facilities had been trying to fix chronic problems with intelligibility for some time before calling in Monte Bros., says Minozzi. “The problems were typical to most houses of worship – people couldn’t hear.” Audio-Technica’s microphones and RF equipment were just one component of the replacement sound systems at the two churches, systems that also include the latest technologies from brands including Biamp, Powersoft and CAMM, a Leon company.

The Miraculous Medal Shrine in Philadelphia, Pennsylvania, and St. Mary’s Seminary and University in Baltimore, Maryland, both contacted Monte Bros. for complete sound system overhauls based on the company’s reputation, Minozzi says. Both churches had similar requirements — to accommodate daily mass and other events with just the celebrant and servers at or near the altar, but then reconfigure the microphone system to handle multiple speaking celebrants during ordinations and other large services. The churches can seat about 800 congregants each.

At the Miraculous Medal Shrine, only the microphone at the pulpit, an A-T Engineered Sound ES925/XLR (with MicroLine element), is hardwired. “The ES925 MicroLine capsule was designed by Audio-Technica with consultation from Monte Bros. back in 1987 for Cardinal O’Connor in 1990,” says Minozzi, and was intended to eliminate the pop of earlier microphone models. “That capsule has accomplished our tasks for all these years, so we stay with that mic.” And since there had been complaints from the shrine’s congregants about the previous pulpit mic popping, the ES925 MicroLine was the ideal solution, he says.

At St. Mary’s Seminary, the majority of the microphones are A-T 3000 Series wireless products. Four body packs are paired with two AT899 lavaliers and two BP894 headset mics. There are also four handheld wireless mics available. System 10 PRO bases are paired with ES925/XLR’s with MicroLine elements at the pulpit and the lectern, and a pair of ATW-T1006 Boundary Microphone/Transmitters, one at each end of the altar. A microphone on the piano transmits through a fifth System 10 PRO base.
At the Miraculous Medal Shrine, logistics mobility was similarly an important factor, says Minozzi, with the microphones at the altar again serving double duty. The church now has three A-T 3000 Series body packs plus a handheld microphone, all operating in the UHF band at 500 MHz. “Besides the three celebrants that have the wireless body packs and headset mics on, any additional people speaking at the altar can be heard through the altar microphone, which is a System 10 PRO ATW-T1006 Boundary Microphone/Transmitter,” he says.

The boundary mic is not permanently positioned at the altar, he continues, which is why a wireless solution was necessary. “They don’t necessarily use a mic there all the time, only for big events. The whole sanctuary area, where the organ and altar are, is filled with priests when they have ordinations, and during the celebration of the services, multiple priests will speak.”

Two other positions in the sanctuary area, a lectern and a chair, are also covered by System 10 PRO bases, in combination with ES925/XLR mics with MicroLine elements. “Those are moveable to another location in the worship space,” Minozzi says. “Or they may take them out completely.”

Additional System 10 PRO bases provide coverage of the choir. “They are usable with any mobile choir microphone that they might want to employ during special events,” he says, and generally move around depending on the need. For example, he says, “You could use ES925s on stands.”

At a sixth location, a System 10 PRO ATW-T1002 Handheld Transmitter is available for use by the organist or a solo singer, says Minozzi. “It’s usually on a stand or boom stand for soloists either at the organ, in the rear sanctuary or sometimes in the front, for concerts, announcements or whatever.”

Monte Bros., which has installed hundreds and hundreds of house of worship sound systems since being established in 1969, has shared its expertise through a webinar entitled “Can You Hear Me Now?” A primer prepared for the Conference for Catholic Facility Management, which oversees the construction and maintenance of buildings and helps local parishes connect with contractors, the webinar explains the essential component parts of a sound system and offers recommended solutions for six common types of Catholic Church architecture. “We broke it down for them,” says Minozzi, “because we are in a position to share our knowledge so churches have a firm starting point before they meet with their design consultant.”