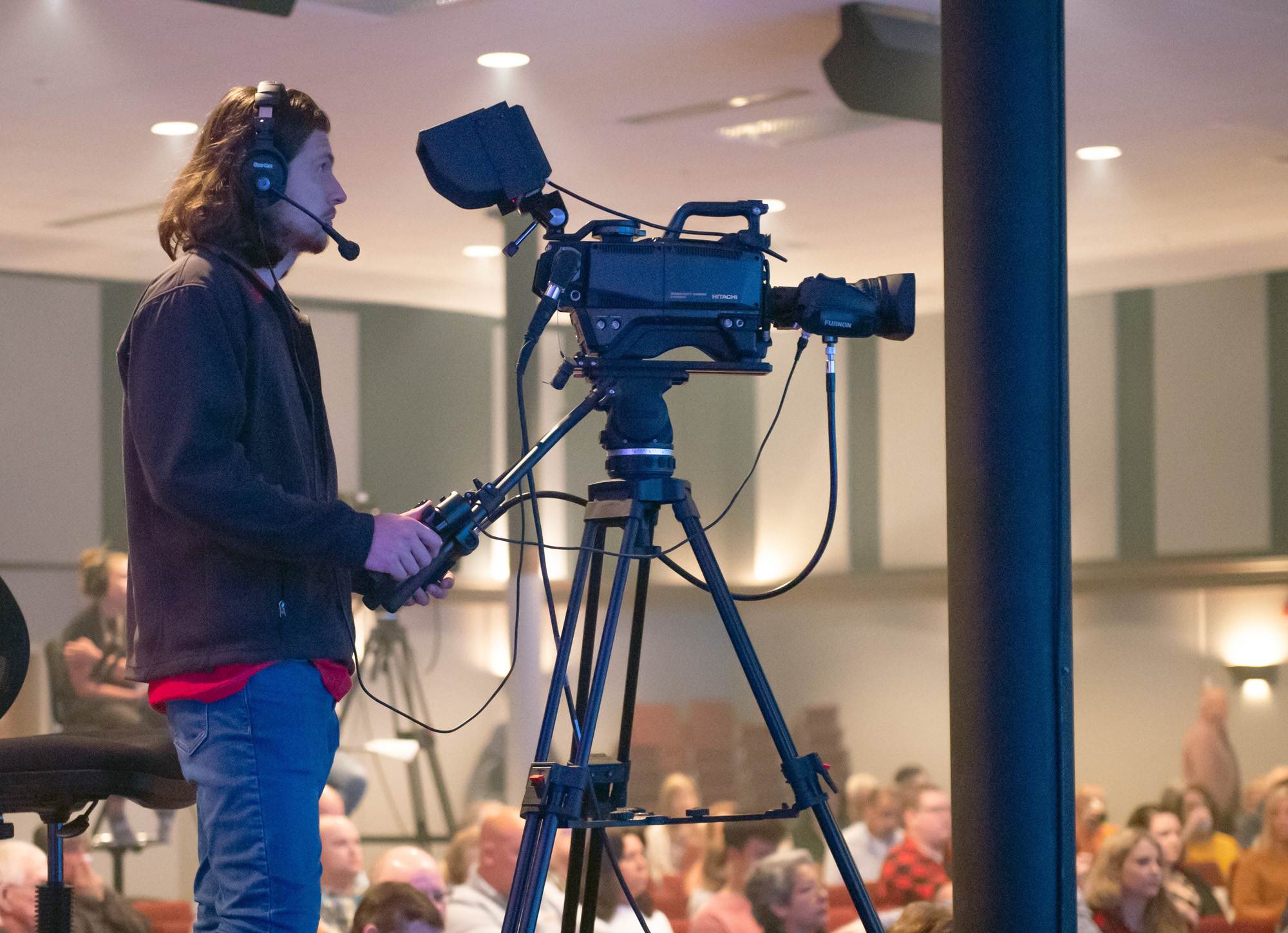 Founded in the early 1970s in Salisbury, Maryland, Oak Ridge Baptist Church has adapted to become a forward-thinking, guest-sensitive, mission-minded church with a current membership of nearly 1500 people. Accelerating a planned upgrade of its video production capabilities in response to the impact of the pandemic, the church purchased three Z-HD5500 cameras from Hitachi Kokusai Electric America, Ltd. (Hitachi Kokusai) to elevate the quality of its online streaming experiences.

Since 2004, Oak Ridge had been located in a former “big box” store within a retail shopping center now owned by the church. More than 1200 congregants attended services each week in the space’s 450-seat main sanctuary or 220-seat theater. The theater offers services with a different music style, a laid-back ambiance, and a separate venue pastor to lead them, but with the message streamed from the main sanctuary.

In 2018, Oak Ridge launched its Build the Dream (BTD) campaign, which included a five-fold growth strategy for the future of the church. Its initiatives were led by the design and build of a new 14,000 square foot, 1000-seat main venue, with video production a key consideration. “We needed a space that allows room for growth of our prime service, but we also wanted the new sanctuary to have high ceilings and a better layout that would enable more camera positions to improve our online presence,” explained Mark Reynolds, executive pastor of business operations at Oak Ridge Baptist Church. “We planned to purchase new cameras as part of that process, but while COVID-19 has delayed the new building until 2022, the pandemic also motivated us to get the cameras much sooner.”

“We were going to upgrade all of our technology for the new building, but all of a sudden we had to put all of our focus online since nobody could attend in person,” said Tim Dennis, Oak Ridge Baptist Church’s global technical pastor. “We wanted to improve our online experience immediately, so we started to make those investments early.”

The church’s leadership also saw the closure as an opportunity to implement the new equipment and train operators without impacting in-person attendees. “The sanctuary being closed was saddening, but it gave us a lot of freedom to make changes without worrying about being fully complete and having the room ready for guests by each Sunday,” explained Dennis. “And for training, we could have multiple people shadowing and participating in what we were doing without impacting seating and guest sightlines.”

Oak Ridge Baptist Church had been using lower-end, robotic cameras but found them to be limiting both visually and operationally. “Our inability to get consistent and reliable movement and shading with those cameras was detrimental to our production,” said Dennis. “They were not the right camera for the high-demand environment that we were using them for. At the same time, the new cameras needed to be volunteer-friendly. We are 95% volunteer-run on Sundays, and the majority of them are not technical by nature.”

Systems integrator Clark AVL recommended Hitachi cameras, and Oak Ridge was comfortable with that suggestion based on other churches’ experiences. “We spend a lot of time going to other churches, seeing how they do things, and talking to their tech teams,” said Reynolds. “We knew other churches had a lot of success with Hitachi.”

The church purchased three Z-HD5500 cameras in April 2020 and went live with them in June. Initially used only for online streaming during in-person restrictions, the cameras now also provide acquisition for IMAG on the sanctuary’s 11 by 6.5 foot screens – which will be replaced by LED video walls in the new venue – with its own distinct production path. A half hour of each service is also broadcast on the local public access TV station.

Dennis notes that the transition to the new equipment went seamlessly. “The implementation of the new cameras was easy, and bringing our volunteer teams up to speed on operating them was fantastic,” he recalled. “Every single one of our volunteers loves using the Hitachi cameras. They’re simple to use, and the ability to remotely shade them from the control room lets the camera operators focus on looking for the shots.”

The visual results from the Z-HD5500s have also impressed the Oak Ridge team. “The video quality compared to what we had before is ‘next level,’ and the exceptional low-light handling gives us complete control of capturing our environment,” said Dennis. “The Z-HD5500s give us a lot more operational freedom, which enables our volunteers to be successful in their roles.”

While Oak Ridge Baptist Church has further plans for the Z-HD5500s – including a jib and dolly – when they move into the new building, the cameras have already had a significant impact on the church’s online presence and growth. “Many churches feared that online streaming would compete with in-person attendance, but we have found the complete opposite,” said Reynolds. “The opportunity to check us out online first has brought more people through our front door. Upping our online streaming game has been worth the investment, and Hitachi cameras have been a critical part of that.”