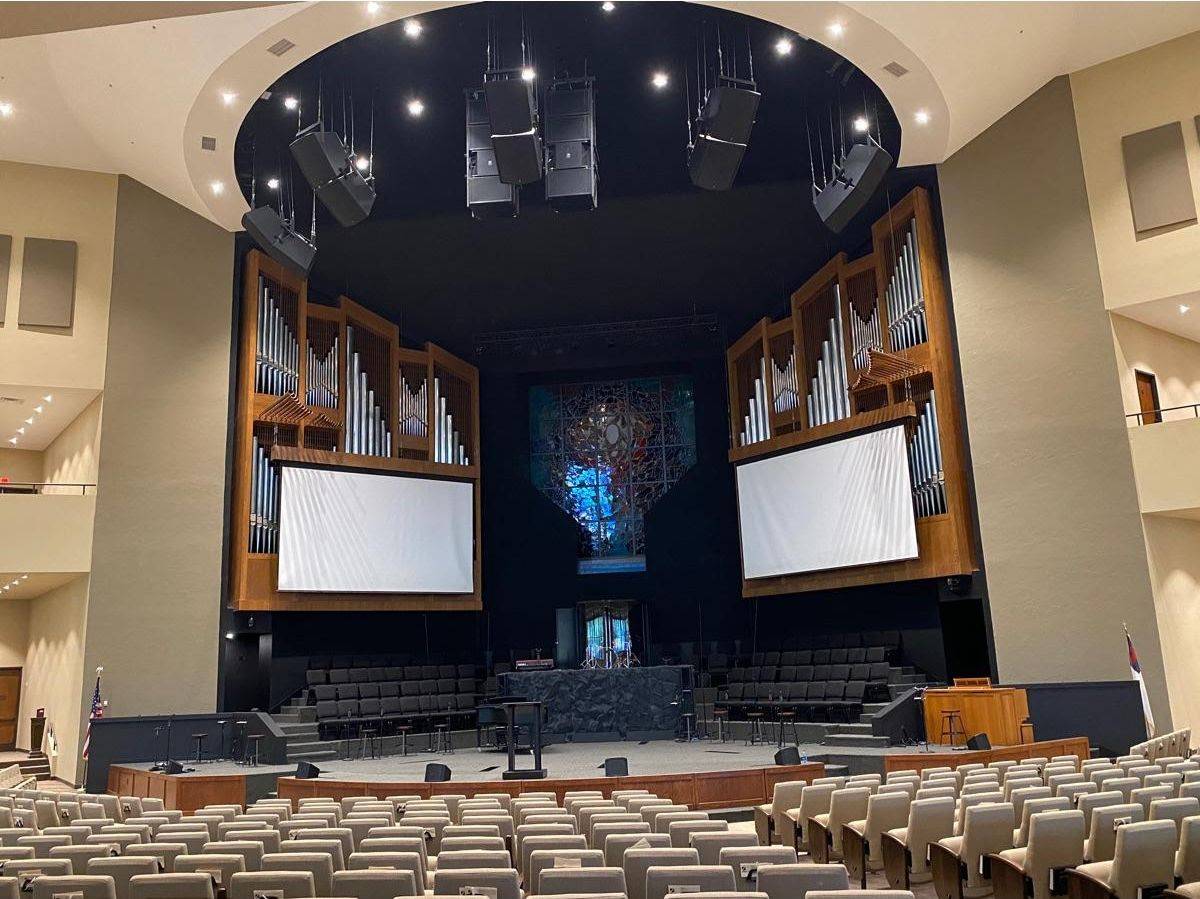 At the end of 2019, a major fire damaged the sanctuary at First Baptist Church. In 2020, renovations began to restore the 2,400-seat space; a new sound system was required as part of this work. First Baptist staff asked Ford AV to design a suitable system for their modern rock worship services and other events held at the space.

Solution
Ford AV deployed ten Fulcrum Acoustic AH4 Higher-Output Coaxial Horns in a semi-circle above the altar for the main coverage. The AH4s were deployed in five groups of two vertically arrayed units. Each array consists of an AH443 over an AH463, with the AH443 providing long-throw coverage and the AH463 oriented downward to serve the lower-level seats. The broadband pattern control and extremely high output of Fulcrum’s AH4 delivered the power that First Baptist Church was seeking while maintaining fidelity and clarity.

“Fulcrum’s AH4 is perfect for the space,” says system Designer Jim Tassey. “It ended up supplying more power than a line array with focused coverage and high fidelity. We knew First Baptist wanted to push the system and it needed to sound amazing under pressure without distortion and the AH4 pulled it off.”

Ford AV installed Fulcrum’s US221 subwoofers in stacks of four on both sides of the center array in an active cardioid array. “I was really excited about the US221s for this project,” says Tassey. “None of us had used 21-inch subwoofers before and the low frequency impact was impressive.”

Nine AH96 High-Output Coaxial Horns were mounted at the ceiling midway between the altar and rear of the church as delay rings. CX826 Compact 8” Coaxial Loudspeakers were mounted under the balcony and on the altar for supplemental coverage and front fill respectively. “The sonic quality of the CX8 is incredible,” says Tassey. “The wide dispersion for short throw coverage, the off-axis response, and the common voicing they have with the AH loudspeakers is very important, so it sounds the same everywhere no matter where you sit in the church. Another great feature is the mid-range coverage in the CX8. People too often forget how important mid-range coverage is for delays.”