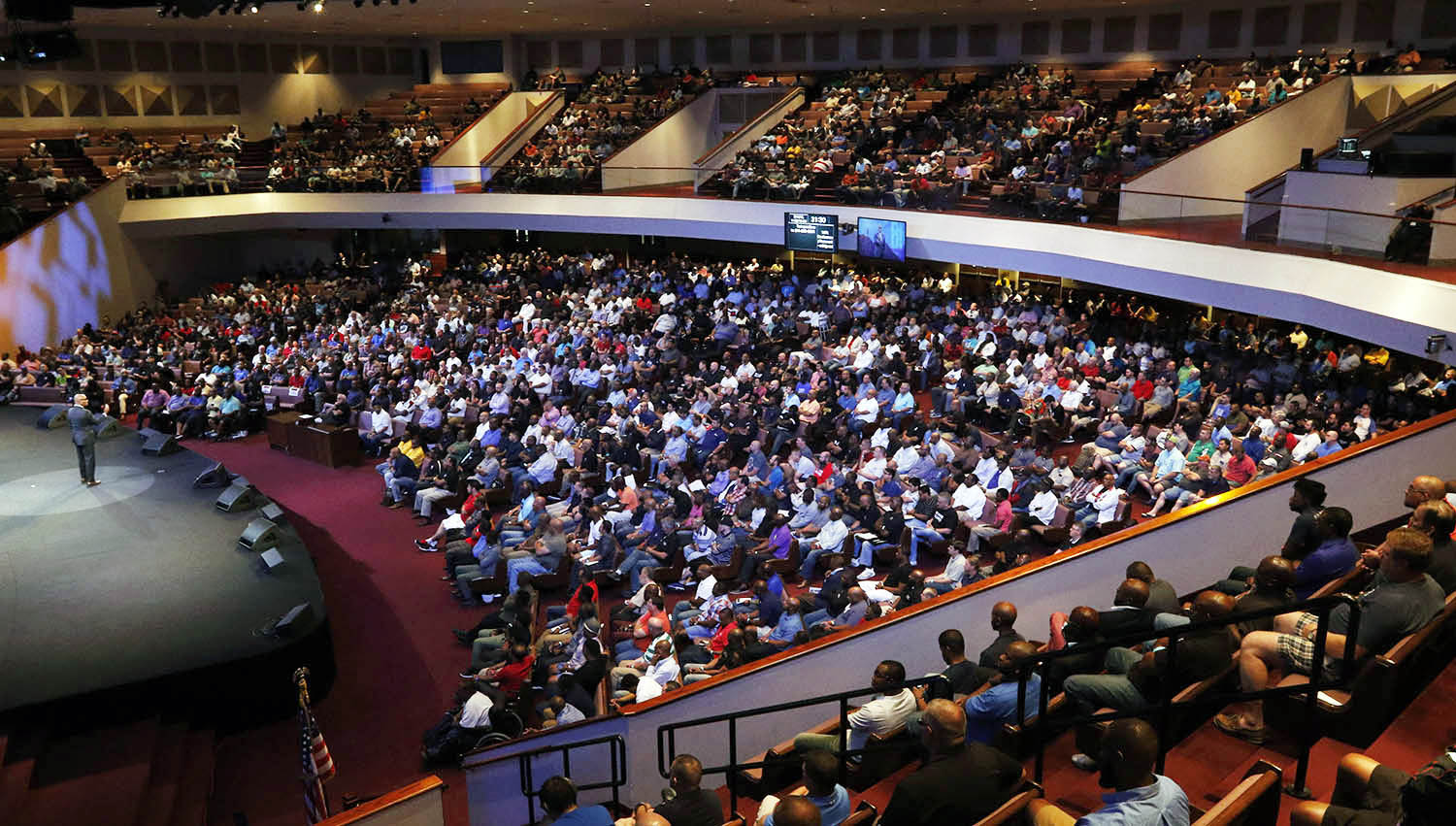 Oak Cliff Bible Fellowship (OCBF) was founded in 1976 by renowned pastor and author Dr. Tony Evans. Since those early days, the upward trajectory of the church in Dallas has blossomed it into a mission-driven mega-church with nearly 10,000 congregants. The venue seats around 3,280 people, shaped in a semi-circle, with large balconies and unobstructed sight lines. But as time passes, so too does the efficiency of audio components while the need for increased acoustical quality grows. The bottom line: the old equipment was outdated and no longer up to par. Along with upgrades to its lighting and video systems, installed by master AVL integration firm Clair Solutions, the church determined its best path forward to meet current and future needs was to install the best, most state-of-the-art, sound reinforcement system on the market. That’s where Clair Brothers comes in.

“The existing system was installed in 1995, and many of its parts were failing. Even when it worked properly, it wasn’t meeting the needs of OCBF’s more contemporary services,” explains Mike Mason, regional vice president for Clair Solutions’ Dallas office. “When it originally went in, the major requirement was speech reinforcement – most of the music was delivered via organ and choir. What they needed was a brand-new system that would take them to the technological cutting-edge, so they made the decision to gut everything and essentially start over.”

For audio, OCBF’s vision involved grander musical impact, so the engineers at Clair Solutions called on sister-company Clair Brothers for a beefy line array comprised of C15 loudspeakers for mains and kiTCurve12s for sides to energize the sanctuary, with powerful low-end support from eight Clair Brothers CS218 subwoofers. As Josh Sadd, chief design engineer at Clair Brothers, describes it: “One notable difference from other church systems is that this is one of the first church systems where we’ve used the kiTCurve12 as an out-fill speaker. Most church installs have used coaxial or conventional point source boxes. The fact that the kiTCurve12 offers a line array type coverage pattern in that position, in a small package that is affordable, makes for much smoother high-frequency coverage in those side areas.”

The side areas requiring coverage in the Oak Cliff sanctuary are both on the floor and on the balcony level which also wraps far around the sides of the stage. The challenges with balancing the tuning of a coaxial or other point source in areas like this are because there is always a defined on-axis point where there is slightly more high frequency content than surrounding areas within the coverage pattern. The curved array as an out-fill minimizes the contrast that results with having a system combining point source fills and line arrays as mains. Says Sadd, “It’s an area that is historically difficult. Picture the point-source coverage pattern as a bull’s-eye. You can make the center point match the sound of most the room, but if you do that then the sound gets quieter off-center. And if you make the ring around the center match the room, the center becomes hotter. It’s a balancing act between having a dull ring around a matched hot spot or a hot spot in the middle of a matched ring.”

The curved array approach is born from what Clair Brothers does for large-scale sound reinforcement projects in arenas. Known as “270 coverage”, main left/right arrays with seats wrapping around the stage’s sides, this technique is superior acoustically as opposed to mixed line and point source designs. Mr. Sadd continues, “This kiTCurve12 array out-fill approach shines at Oak Cliff. The kiTCurve12 has the same high-frequency components and therefore similar voicing as the C15 mains.”

When it comes to the rest of the system, the eight CS218 subwoofers are installed in the form of a flown endfire cardioid array that pushes more low-end energy to the seats and less to the stage. Clair/Lab.gruppen D-Series multi-channel amplifiers with integrated Lake DSP power the system, with additional processing from stand-alone Lake LM44 DSPs. Along with a Clair Brothers 1AM stage monitor package, other modern components installed were Studer digital consoles at FOH and broadcast (with full Pro Tools recording and playback capabilities) that provide synergistic user control for OCBF’s professional audio staff. Antelope digital clocks keep the entire AVL system in sync while Roland personal mixers and a Shure wireless microphone system helps round out the overall increase in powerful sound from the stage.

In conclusion, Mr. Sadd tells us, “The commissioning of the system was fairly simple from my perspective due to the pinpoint positioning of all the arrays and sources. It’s really a nice room with a solid match between geometry of room and geometry of sound system, which made for easy tuning and balancing. Arena-quality sound in a medium-sized church sanctuary – how cool is that?”