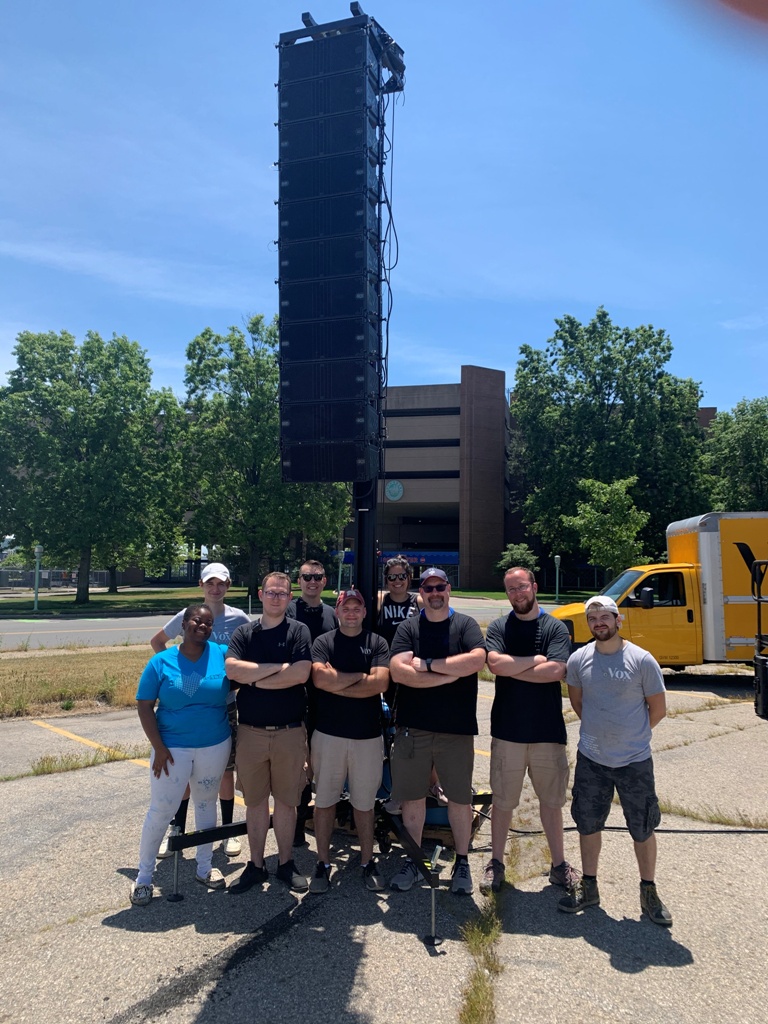 As a response to the 2020 Covid-19 Pandemic, New Haven Connecticut-based Vox Church recently held three drive-in worship services using dBTechnologies DVA K5 Active Line Arrays and SUB 18H powered subwoofers. A growing church with seven locations, Vox has standardized on these dBTechnologies models for most of their needs and uses them for “load-in/load-out” services in several locations. This simplifies crew training, speeds setup and makes it easy to configure systems for large events like this.

The drive-in system, used for all three services, consisted of left and right arrays of 11 DVA K5s and a 3×3 end-fire cardioid array of SUB 18H subwoofers. Vox Church FOH engineer, Eugene Mulcahy used dBTechnologies Composer software to design and optimize the DVA arrays. “I did everything Composer told me to do,” he said. “And the predictions were right on. We had good audio out to at least 200 feet.”

Mulcahy simplified FOH electronics by using the church’s digital mixer for processing, routing and EQ. “I had a Waves super rack but the only thing we used was an API 2500 compressor,” he explained. Monitor Engineer Justin Beardsley mixed the band’s in-ear monitors from back stage and commented that the DVA K5 arrays did a great job of minimizing rear spill onto the stage. “I was directly behind the arrays and did not have that flush of PA right on me or on the band. That was nice,” he said.

Vox Church plans four more similar events soon and Robert Roy Jr., the church’s Central Production Lead, says that, based on the success of these drive-in services, “These outdoor events for our church are going to become a norm. Now, all the gear is spec’d and pre-rigged with the array angles set in the shop. We know how to pack it on the truck so moving from one location to another is simple – just ‘copy and paste’. All we had to do on site was to fly it.”

Roy says his crew worked very hard to make this weekend of drive-in worship a success but it was well worth the effort. He commented, “After the weekend, lead pastor Justin Kendricks came into our normal Tuesday meeting and he simply said, ‘Our production team only knows one gear and that is awesome!’”