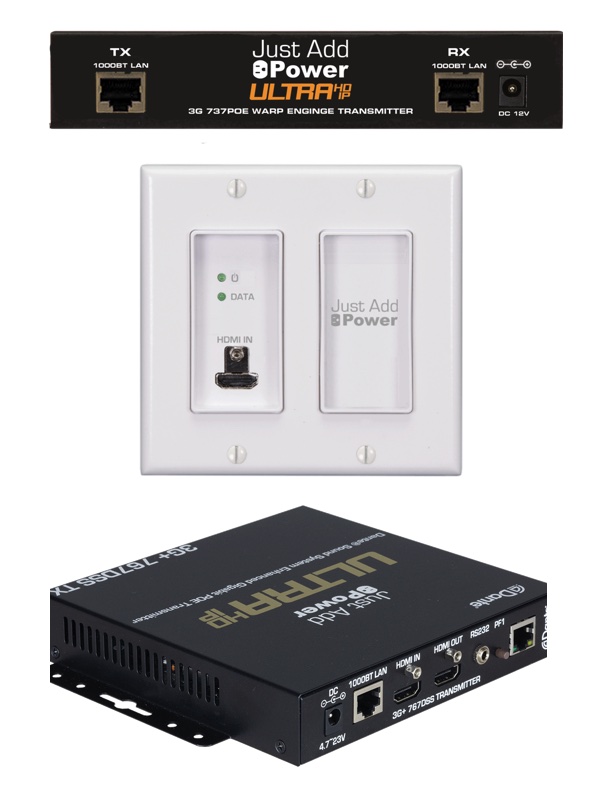 “This year at ISE, we’re really stepping up our game for our international customers with a number of new products that bring powerful capabilities to integrators in the EU and beyond,” said Taft Stricklin, sales team manager at J+P. “The Warp Engine allows installers to get creative with their video walls by venturing beyond traditional grid patterns, while our next-generation HDMI wall plate offers a thin design for installation flexibility, and the 3G 708POE transmitter allows them to cost-effectively add a stereo analog audio output. In addition, the Instant Install app takes the guesswork out of any project — requiring only a single click to configure all devices connected to a gigabit switch. Finally, our 767DSS transmitter conveniently adds compatibility with Dante and AES67 audio networks.”

J+P’s new 1-RU Warp Engine transmitter/receiver allows installers to easily deploy video walls with eye-catching designs featuring mixed-and-matched display models mounted at any angle. With the unit, installers can rotate any HDMI source — cable boxes, media players, game systems, cameras, and more — in a J+P matrix in 0.1-degree increments in real time to achieve incredibly low latency. The rotated image can then be sent to an unlimited number of receivers in the network, allowing for the creation of massive artistic video walls using a single Warp Engine.

The VBIS-HDIP-707WP2 thin two-gang HDMI wall plate transmitter allows users to easily incorporate laptops and other HDMI devices as sources for their Ultra HD over IP systems. Offering a depth of only 1.5 inches, the unit is ideal for installation in the thin walls common in the EU and other regions, while providing integrators with the flexibility of table or podium mounting. In addition, the thin wall plate features a field-serviceable modular design, making it easy to service with a screwdriver in the event of damage.

An upgrade to J+P’s 707POE transmitter, the 708POE adds a stereo analog audio output. Like its predecessor, the transmitter distributes video resolutions up to 4K Ultra HD with no latency over a single Cat 5e cable. The unit supports HDCP 2.2 and all lossless audio formats, including Dolby Atmos. Video wall functionality is built-in for displays installed in portrait and flipped configurations, as well as image push, pull, and pop features.

Part of Just OS, the Instant Install application allows installers to easily incorporate any gigabit switch that supports jumbo frames — managed or not — into their J+P matrix. They simply connect their devices anywhere on the switch and click a single button, and their devices are found and configured, and a driver is built — all in less than two minutes.

More information is available at www.justaddpower.com.