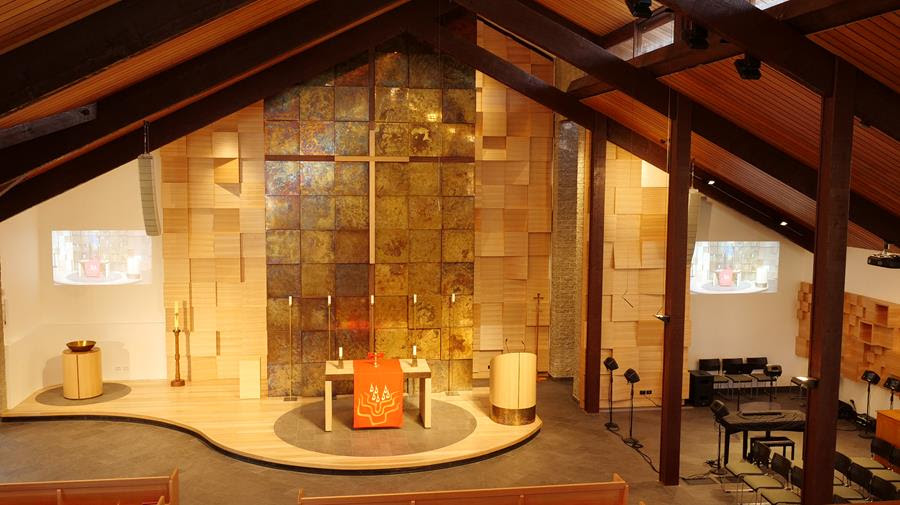 Situated in the Melbourne’s east, the community at St. Paul’s Lutheran Church was being crowded out by a suburb fast-tracked for urban growth.

Needing to relocate to a quieter location with room to expand, they became aware that a short distance down the road the St. James Uniting Church, with its striking mid-century early modern architecture, was looking to sell.

It looked a perfect fit. A deal was done which duly led to a full-blown renovation of the church, including a sensitive, high quality audio visual fitout in the heritage-listed building. This included a Martin Audio O-Line as the sound reinforcement system.

St. Paul’s Lutheran found an integrator in Mozaix that really understood house of worship requirements, and director Paul Tucker immediately struck up a rapport with the Church’s building committee.

Paradoxically, the original St James space had been too acoustically ‘dead’—which is an almost unique problem to find in a church building. Due to its carpeted floors and construction of the vaulted ceiling, in its previous unrenovated form it didn’t suit St Paul’s style of ‘call and response’ congregational worship.

Acoustic engineer, Andrew Nicol, thus applied acoustic treatment in the form of an array of signature reflective diffusers for the front wall and behind the band stage, as well as hard stone tile flooring, acoustic panels on the rear wall and acoustic absorption on the balcony fascia. The result is an acoustically lively but controlled space that suits congregational involvement and accommodates high SPL sound reinforcement.

Nicol briefed the AV system designers, Hanson Associates, and their consultant Mark Thompson noted that given the acoustic design—and in order to enable the church to benefit from this live reverberance—the loudspeaker system best suited to meet all requirements was a Martin Audio O-Line. This, he felt, would provide a properly engineered speech reinforcement solution and the decision to specify 12 elements per side was based on Hanson’s acoustic modelling process.

Both Paul Tucker and Hanson Associates have worked on previous jobs involving the sleek Martin Audio O-Line micro-array, and all participants were confident it would deliver the goods for the St Paul’s fitout.

The technology certainly suggested that it would. Every element of the Martin Audio O-Line PA is individually addressed by its own amplifier channel and processing, allowing the array to be beam steered, thereby keeping energy out of the ceiling space and the pipe organ loft.

Unlike many DSP-steered columns, an O-Line array does not produce unwanted vertical sidelobes in the audio band. This is critical in reverberant environments, since sidelobes, firing above and below the array, simply adds to the reverberant energy, impacting negatively on intelligibility. O-Line’s ability to reproduce very high frequencies without sidelobes makes it ideal for both full range speech and music reproduction in Houses of Worship.

“It’s a very transparent PA — it’s not lumpy in the bottom end,” noted Paul Tucker. “It really connects to the room nicely. Hanson Associates took care of the final tuning of the PA and it’s come up nicely.

“We had a consecration service featuring a fantastic viola player, and the sound of that instrument was beautiful — really stunning.”

An Allen & Heath mixing environment (over Dante) is complemented by Q-Sys signal processing. The AV booth is also the control hub of all the video and streaming capabilities (St Paul’s has been recording and broadcasting services since well before the Covid-19 pandemic).

As for operation, it couldn’t be simpler: a church volunteer can fire up both the PA and the projectors with a couple of clicks of the iPad.

Finished in neutral light grey, to blend in with the architecture, the slimline, discreet and architecturally sympathetic O-Line arrays set the tone for the install. The video projection and architectural lighting sources are equally discreet, and so when it comes to technology, transparency has been the watchword.