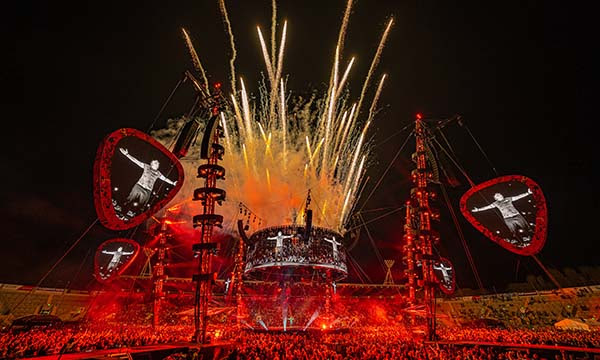 More than 80,000 Irish fans burst into cheers of jubilation when the first pummeling chords of “Tides” opened each of Ed Sheeran’s two shows in late April at Dublin’s Croke Park Stadium. Though most in attendance knew that the shows were the first of the in-the-round “+ – = ÷ x” (“Mathematics”), Sheeran’s fourth world tour, few outside the production crew likely knew that the occasion also marked the global premiere of Meyer Sound’s new PANTHER large-format linear line array loudspeaker. Supplied by U.K.-based Major Tom, Ltd. and suspended from daringly conceived mast and cable net rigging, the system was anchored by 212 PANTHER loudspeakers. The Dublin shows also were the first anywhere to deploy a Milan protocol AVB network from FOH mix all the way to the loudspeaker cabinets.

Although the PANTHER-based system is substantially smaller, lighter, and more energy-efficient than would have been the case using Sheeran’s prior touring inventory, which was largely based on LEO® line array loudspeakers, everybody on the audio production team was confident that the new rig would perform with equivalent results. However, according to Production Director and FOH Engineer Chris Marsh, the Dublin debut suggests their expectations may have been overly cautious.

“One of the main criteria for the tours since we started 11 years ago was that Ed has to be heard clearly at every seat in the venue,” says Marsh. “I’ve always been impressed by how well LEO arrays could bring that sense of intimacy to the back rows of stadiums. And in that regard, I was surprised at how PANTHER, a lighter and smaller box, could do the same. I managed to get a bit of a walkaround during the support acts, and I was immediately aware of the remarkable clarity at distant seats.”

Marsh emphasized that the clarity went beyond simply a fan’s ability to understand Sheeran’s lyrics. “Clarity is usually thought of in terms of the high-end, of sibilants and diction, but PANTHER was also very tight in the low-mids — something you tend not to get when that far away. Everything was present and clear, including subtle nuances like reverb tails, which are often lost at distance.”

Mixing the shows behind his DiGiCo Quantum 7 “was a remarkable experience,” says Marsh. “With LEO, I felt everything sat nicely in the mix, with ample open space. But now I feel PANTHER gives me even more space, an even larger canvas to paint on.”

The primary, Milan Certified GALAXY 816 Network Platform at FOH connects to a Milan End Point (MEP) network, configured as a star topology, which consists of one GALAXY™ 816 platform, three GALAXY 408 platforms, and 20 Luminex Gigacore 26i switches. As failover backup, the always-active parallel analog inputs were connected via a primary and secondary redundant Milan network with dedicated GALAXY units.

The advantages of PANTHER also extend to the efficiency and sustainability of the tour, according to Marsh. “With the way it rigs, the 14 hangs go up and come down very quickly. Also, we are taking up a lot less truck space than if we were using other systems. The entire audio system fits in only three trucks, which we could not do with a LEO-based system or likely any other. Finally, although I don’t have the telemetry data yet, I’m sure the power consumption is way down from what we had on our previous tour, and those were end-on shows.”