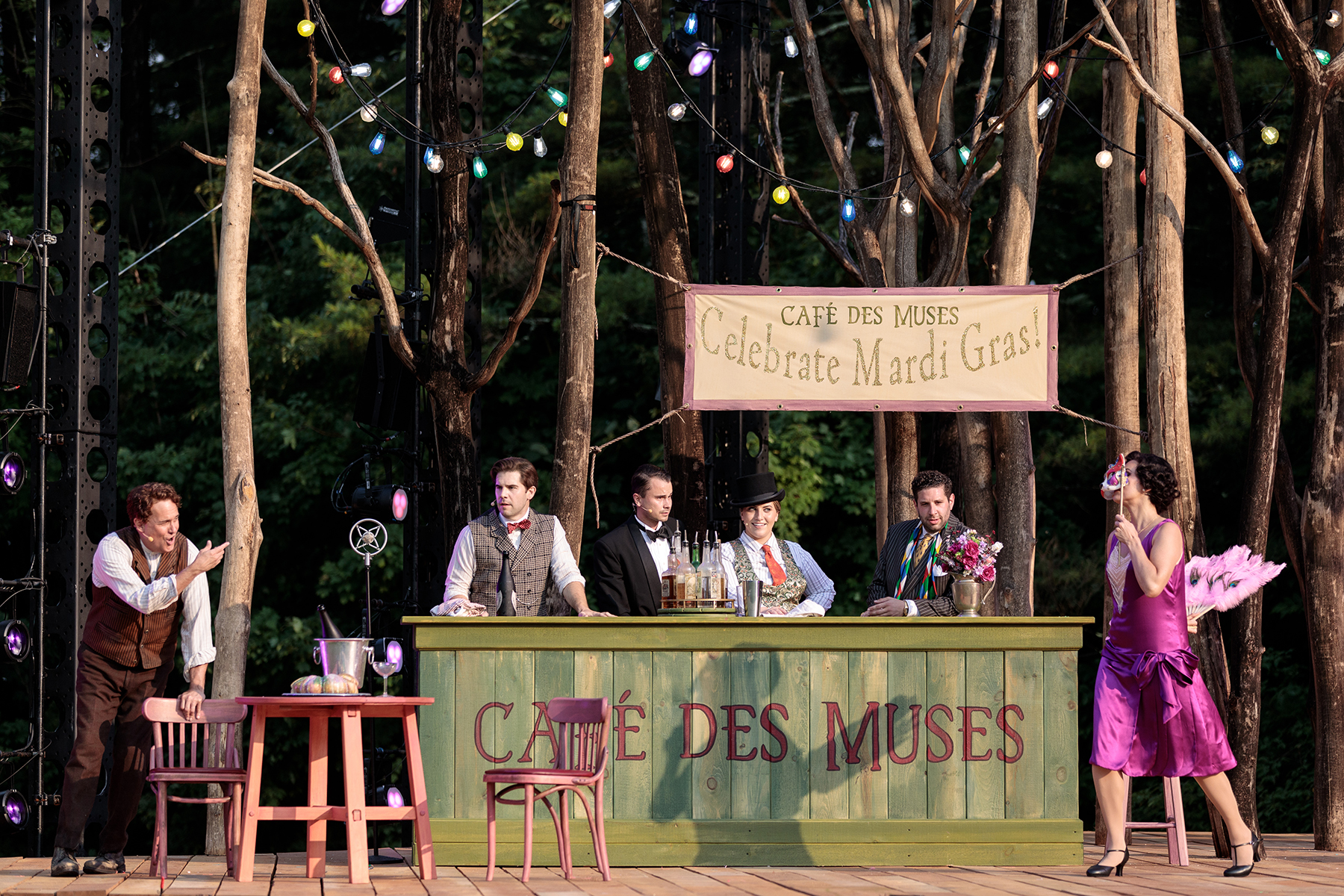 Harper was presented with a unique challenge under the current health and safety standards. “Normally all productions are done inside at the opera house where there is no amplification at all,” says Harper. “This year, the producers created an outdoor stage on the lawn, with the singers and audience outside but the orchestra was located inside. I was tasked with combining the two worlds of the singers and the orchestra, while also creating a great experience for the audience outdoors, all while keeping everyone socially distanced.”

Harper had worked with Masque Sound previously and had full confidence they could provide all the equipment he needed to be successful. “I had the pleasure of working with Masque Sound for Theatre Under The Stars in Houston and I knew they would be great to work with for this unique season,” says Harper. “I called Scott Kalata at Masque Sound very early on in the process and he was unbelievably helpful in tracking down all of the equipment on our list. It was such a unique set of needs because the stage was outdoors, so I needed to make sure all the equipment was weatherized and dependable. Most importantly, I needed it to sound amazing and Masque Sound made that happen.”

For the PA system, Masque Sound provided 32 weatherized Meyer Sound LEOPARD line arrays. “The stage set up had a unique audience geometry as it was not a completely symmetrical system,” says Harper. “As a result, I wanted something that had great imaging, punch, clarity and power. Since the orchestra was located inside and amplified, I needed to be able to reproduce them in a very musical manner along with the opera singers. Glimmerglass is so unique in that each show has a completely different audio requirement, from purely classical opera to a New Orleans-inspired jazz band to traditional Broadway. The LEOPARDs allowed me to create a unique experience for each one of those productions.”

The microphone package consisted of Point Source Audio’s new GO2-8WD Dual Element Headset mics for the singers while the ensemble was outfitted with CO-8WD headset mics. “The microphones sound absolutely phenomenal,” says Harper. “We were able to place them exactly where we needed to get a really pure sound from each singer. We have even performed in torrential downpours, and they were great.”

The orchestra featured a mix of Schoeps, DPA and Shure microphones. According to Harper, “We went with more of a recording set up than a traditional musical theater pit because the musicians were socially distanced on stage. I hung a Decca Tree array of Schoeps MK 5’s with a DPA 4011 cardioid as the center mic, all supplied by Masque Sound. I also placed a series of spot mics around the space to provide some details that changed depending on the layout of that particular show.”

Masque Sound provided a Yamaha RIVAGE PM7 with two RPio622 I/O racks. Harper chose this console not only for its incredible sound but also for its ability to help shape the sound of the orchestra and provide a powerful mix.

In addition, this year’s festival called for some specialized equipment that Masque was able to provide for the event. “We needed some non-standardized pieces of equipment and Masque Sound was able to find and deliver what we needed. This included extra-long cable lengths for bundles and fiber runs as well as RF-to-fiber converters and a specialized tower truss for one of the Meyer LEOPARD arrays. In addition to the amazing collaboration with Masque Sound, I also have to give so much credit to Francesca Zambello and her team at Glimmerglass. Francesca knew that sound was critical to the success of this season, and she made sure I had access to the tools necessary to pull it off. Glimmerglass Director of Production Abby Rodd and AV Head Joel Morain assembled an excellent crew including our amazing and talented A1 Elyssa Kohen. My Assistant and Production Sound Boomer Bardo worked tirelessly with me to help ensure our success. This was certainly a unique and challenging season, but everyone came together to make it a great one. I couldn’t be happier.

It is such a joy and an honor to work with Masque Sound. There was amazing work and support throughout from the entire team, but especially from Scott Kalata, Leslie Stong, Gary Stocker, Doug Cross, George Hahn, and Tara Perez our show captain. Additionally, Masque provided excellent support in the field. They were able to get us replacement equipment on a day’s notice over a weekend when we had an issue. The ability to pick up the phone or send an email and get answers and help almost immediately is invaluable, especially when you’re working outdoors in a remote area.”

Scott Kalata, director of sales, Masque Sound, says, “It was such a privilege to re-boot and re-start with someone as experienced and friendly as Andrew Harper. Even though it’s not quite business as usual, Andrew was able to make this complex event unfold like magic and we’re grateful to be a part of it.”