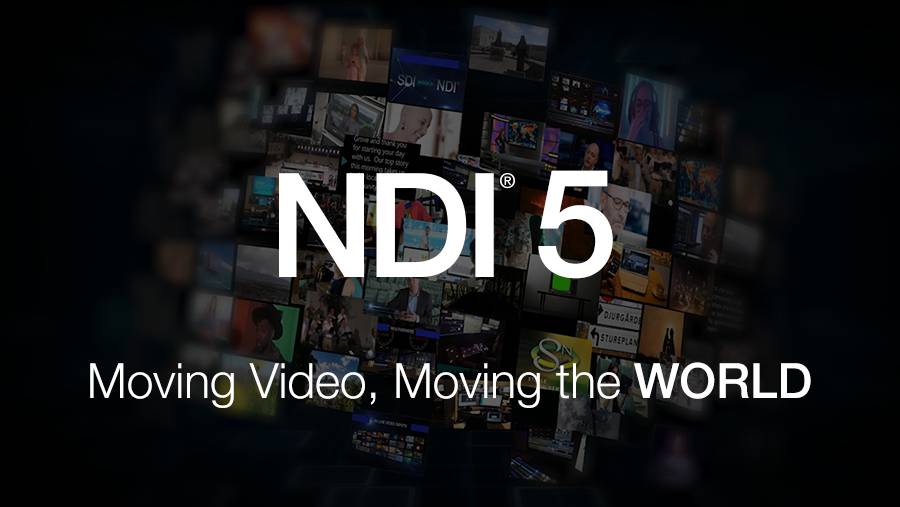 Several major technology providers in the professional AV and broadcast industries have reacted with excitement to the NDI 5 announcement on Wednesday, June 2. NDI®, is a Vizrt Group brand and the world’s most widely adopted software-defined IP video standard. NDI 5 allows anyone to easily share live, high quality, low latency video with anyone else in real time, using billions of devices.

Further indication of excitement behind NDI 5 is highlighted by NDI’s limited time offer of 10,000 free downloads of the NDI®∣HX Camera app for smartphone users. The 10,000 free downloads were consumed in less than 2 hours on Wednesday following the announcement. NDI later announced that both the iOS and Android NDI∣HX Camera app will be 50% off (U$9.99) through June 16th, 2021.

Michael Namatinia, president of NDI, said, “NDI has always been about the community, from individual visual storytellers to global software houses and manufacturers. I simply cannot wait to see the amazing ways they employ NDI in this AV-over-IP revolution.”

Some of the reactions from around the industry:

“NDI is already enabling connectivity and collaboration by making real time video sharing a standard function on local computer networks. With NDI 5, this extends out to include wide area networks and connects users for video collaboration across much larger distances. NDI has applications including such as lecture capture in education, digital signage in houses of worship and live video stream input to collaboration tools leveraging optimisations to leverage silicon features of Intel processors. NDI 5 extends the solution footprint for these applications beyond a single premise,” said Dr. Ben Cope, Technical Lead from Internet of Things Group (IOTG) of Intel Corp.

“We are super excited to be working with the NDI team to offer the industry’s first NDI instant configuration in our new M4250 line of switches. The NDI team is just fantastic to work with and we recognize just how fast the adoption rate is around the world. Wow! It is really taking off. NETGEAR is very proud that NDI has validated our switches to provide such a powerful solution making it easier for people to deploy IP-based workflows. Congratulations on the release of NDI 5!” said Laurent Masia, Director of Pro AV Engineering Services at NETGEAR.

“The industry is clearly moving towards IP and we have extended its benefits to customers by adding NDI|HX to our remote cameras since 2019. Due to the drastic change in the way we work, demand for efficient and high-quality remote content production has increased more than ever. We look forward to working closely with NDI 5’s advanced usability, in supporting the expansion of the IP footprint in cost-efficient productions and to add value to our offerings for customers,” said Akira Saito, Deputy Senior General Manager of Camera System Business Division, Imaging Products & Solutions Business Group, Sony Corporation.

“NDI 5 is a steep change in what it can achieve. It allows for more efficient processing and global reach. It also brings to market new types of products. Thanks to the power of NDI 5, we’re able to announce the BirdDog Play device. This is the world’s smallest and lowest cost NDI decoder supporting high bandwidth NDI, NDI|HX, and the new NDI Bridge and NDI Remote protocols. Thanks to the NDI team, we’re really excited about today and into the future,” said Dan Miall, Co-Founder and CEO of BirdDog.

“Kiloview has enjoyed a long, successful collaboration with NDI. Now, NDI 5 brings revolutionary progress. On just an ARM CPU, we can efficiently realize NDI encoding and decoding. This is amazing! Good job! We will bring you powerful NDI and NDI|HX all-in-one encoding and decoding products at low cost within a short time. This is an exciting moment. Congratulations to the whole NDI team!” commented Jacob Zuo, President and CTO of Kiloview.

“We congratulate NDI on another major release. We’ve been following NDI since its release in 2015. It’s incredible that we are already on version 5 after almost six years of improvement. NDI 5 is coming at a time when there has been more use of video around the world than ever before. The new NDI Bridge and NDI Remote applications are welcomed additions to the NDI toolkit. We can’t wait to see how users and our customers are going to be using these tools not just from their local area networks but from around the world!” commented Paul Richards, Marketing Director for PTZ Optics.
To make NDI even more accessible to new and experienced users alike, the free NDI Tools download has been reimagined for NDI 5 with a fresh interface and intuitive guidance built in.