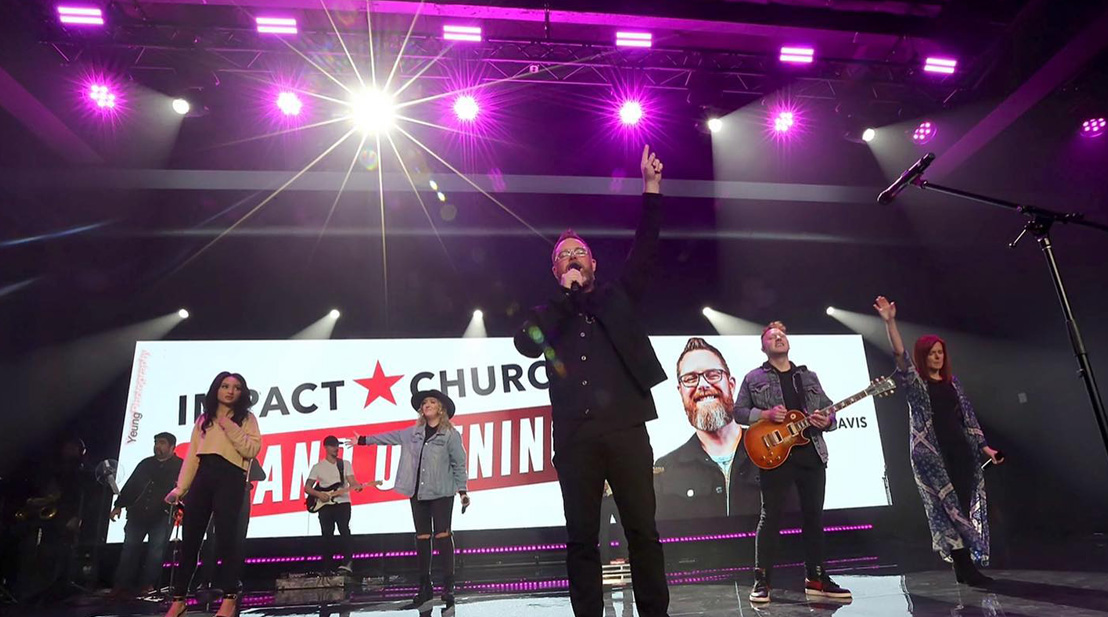 What began as a bible study for the Arizona Cardinals hosted by player Andre Wadsworth in the late 1990s was opened to the public and soon became one of the fastest growing churches in the nation. Headed up by Senior Pastor Travis Hearn, Impact Church has a reputation for diversity, authenticity and throwing a huge God-sized party celebrating Jesus each weekend! These parties (services) have become so popular that the church outgrew its previous building, which led to an ambitious project to retrofit a former grocery store into a large custom-designed worship space.

The company responsible for designing, supplying and installing the audio, video and lighting system for the new facility – Illuminate Production Services – has a relationship with pastor Hearn which predates Impact Church. The company’s President, Rick Franke, served as Youth Pastor at Hearn’s previous church in the early ‘90s before focusing on a career in church media. He founded IPS in 2006 with his wife Sherece and together they have built the company into a market leader, providing integration services to churches across the USA as well as supplying concert tours, festivals, corporate events and theaters.

Having maintained a friendship with Rick over the years, and aware of the strong reputation his company has for effectively delivering the specific production needs of church clients, Travis reached out to IPS to partner with Impact Church on this exciting yet challenging project. Originally designed as grocery store, the church’s new building didn’t afford the height often found in purpose-built church buildings, which meant that Rick and his team had to design the new system carefully to maximize the available rigging height. Another challenge they faced was the presence of support columns throughout the auditorium, which was overcome by an expansive video system that can be clearly seen from anywhere in the space.

At the heart of the church’s new video system is a large LED wall comprised of no less than 144 ADJ VS3 panels. This video display surface extends the full width of the stage and provides a constant backdrop to whatever is happening in front of it. This not only allows for the display or song words, pre-produced video content and IMAG, but also the creation of striking silhouette effects with solid colored graphics on screen and the worship team standing in front.

Part of ADJ’s Vision Series of LED video products, the VS3 offers a brightness of 1000 NITS and a pixel pitch of 3.91mm from its configuration of 3-in-1 RGB SMD2121 LEDs. Each panel features a Novastar A5s receiving card built-in and is provided with both PowerLock input/output and DataLock input/output connectivity. All models in the Vision Series have retractable corner protectors for added protection during transit and are fitted with magnets that allow users to temporarily connect two panels together, let go of the panels, then securely latch them on the rear. This allows for a single user to install a full wall of panels. Each panel is comprised of four separate modules and is front/rear serviceable, making it an ideal product for installation projects such as Impact Church’s new facility.

“The clarity of the VS3 is phenomenal,” comments Rick. “In any large congregation or assembly, uniformly clear visuals from the front row to the last seat are always a key reason for quality LED video. But, the content Impact Church is producing is also exceptional. Furthermore, Impact Church’s message has the attention of many people of influence who are accustomed to broadcast quality professional communication. With all of this in mind, the VS3 LED wall we installed produces truly stunning quality, well suited to the way the message is being communicated and received at Impact. As far as the technical challenges of this project, the VS3 really outperformed in many ways. We needed a high refresh rate on the wall because of the strong IMAG and broadcast requirements in the space, and it excels in that regard. From a practical point of view, it’s about the easiest wall our team has ever assembled, and we have certainly built a lot of LED walls!”

“Selecting the Jolt 300 for this project was a value decision,” explains Caleb. “We needed a good quality of coverage from a strobe/blinder effect light that can also be used for color. The Jolt really delivered a nice punch for that space. They were installed on the mid-stage truss, downstage truss and floor. With 18 of them it created a nice layer of flare to the stage.”

The remainder of the lighting rig features a variety of fixtures selected from the extensive catalog of ADJ’s sister company, Elation Professional. Aerial effects and surface projections are generated by 16 FUZE SFX versatile moving head luminaires which are complemented on stage by 12 Rayzor 760 moving head wash fixtures. A run of CHORUS LINE 16 motorized pixel wash bars sit under the LED wall along the back of the stage, while key light is provided by a mixture of KL Fresnel 6 CW and KL Fresnel 8 fixtures. Finally, the setup is completed by a Magmatic Therma Tour 800 oil-based haze generator.

Summing up the project, Rick states: “We feel the overall design and products chosen have not only met, but exceeded expectations. More importantly, our clients absolutely love the finished project. It was so great seeing the smiles come to the leadership team’s faces as the systems came to life. This was a full audio, video and lighting install, so watching it all come together brought a lot of joy to the team. Like with any project, seeing the technology bring a space to life is always fun. Being there to observe the reactions of the client was a priceless experience.”

IPS carried out the installation of the new system in the fall on 2020 and had it fully commissioned in time for Impact Church’s grand opening event at the beginning of December. Since then, the versatile system has been utilized extensively both for energetic in-person Sunday services and engaging online broadcasts that extend the church’s message across Scottsdale and beyond.