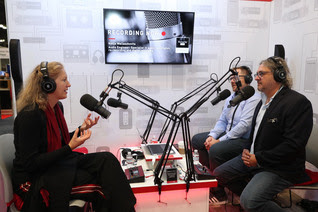 One year ago, Focusrite officially launched the Focusrite Pro Podcast, expanding upon its status as a worldwide thought leader in Audio-over-IP and the broader landscape of the audio industry. In the nearly 25 episodes that have been posted since the series’ inception, show host and producer Daniel Hughley (Focusrite Marketing Manager) has guided discussions offering insights into the cutting-edge technology behind current audio trends. Guests have included industry peers and leading individuals in Education, Recording, Post-Production, Broadcast and beyond. Topics have included Dolby Atmos® and Audio-over-IP, podcasting basics, the future of the Audio Engineering Society, the production of Live from Darryl’s House, advice on evolving one’s career in audio, and much more.

On the occasion of the one-year anniversary, Hughley is taking the opportunity to reflect on the show’s journey over the last 12 months. He notes, “The evolution of the Focusrite Pro Podcast is very close to my heart. We started with just a crazy idea to attempt to record a few episodes on a busy and noisy NAB tradeshow floor, and, like with most start-up podcasts, we weren’t sure that people would listen or if we would even be able to book guests. We hit our stride around episode 7 or 8 when Ted White [Focusrite Pro Global Marketing Manager] joined in as my full-time co-host. Ted has a very broad and technical studio background, and I’m more of a curious novice. Paired up, Ted and I have good chemistry on the mic, and I appreciate that Ted can talk to guests on a more technical level while I ask the big-picture questions. We’ve also hired a freelance editor, Bryan Entzminger, to take some of the workload off of myself, and Bryan has helped us tremendously.”

Hughley can cite highlights from every episode, but he says he has a clear favorite: “Episode 14 with Historical Audio Restoration Specialist and 2019 AES President Nadja Wallaszkovits. Nadja’s passion shined through both during the interview and during the editing process. The work that Nadja has done throughout her career is extremely important to the history of audio recording.”

Another favorite of Hughley’s is episode 7 with studio owner and engineer Dave Henszey, who works in the Dolby Atmos format. He notes, “Dave has evolved to stay on the cutting edge of audio throughout his entire career. He speaks very passionately about what he does and is very informed.”

Terri Winston, Executive Director of Women’s Audio Mission (WAM) was the subject of episode 19, which Hughley also singles out: “I always love speaking to Terri. She teaches and empowers young women to become audio engineers and production experts. Through their school and studios, in the Oakland / SF Bay area, WAM has reached many women and many of them from underrepresented areas. Terri is just one of my favorite people to talk to both on and off mic.”

Episodes 20 and 21 were a two-part in-depth conversation, “Shaping the Audio Industry as We Know It,” with author, journalist, technical writer and consultant Frank Wells, who is a Past President and current Director of Communications for the Audio Engineering Society. Hughley remarks, “Frank was the first industry contact I made in my career. This was when he was president of AES, but I didn’t know it at the time. Just like he never spoke to me about how he helped to shape the pro audio industry as we know it, until I got him on the mic and pressed him for it. Frank is a super humble man and just a pleasure to speak with. Our industry wouldn’t be where it is today without Frank Wells.”

Hughley sums up the podcast’s journey since its launch: “Over the last year we’ve watched our listenership increase, and lately we’ve had guests come to us requesting to be on the show. Working on this podcast and working with podcasters are two of my favorite things that I do in my role at Focusrite. We have some great things in store for year two, and we look forward to sharing these future episodes with you.”

For more information about the Focusrite Pro Podcast, visit https://pro.focusrite.com/podcast.