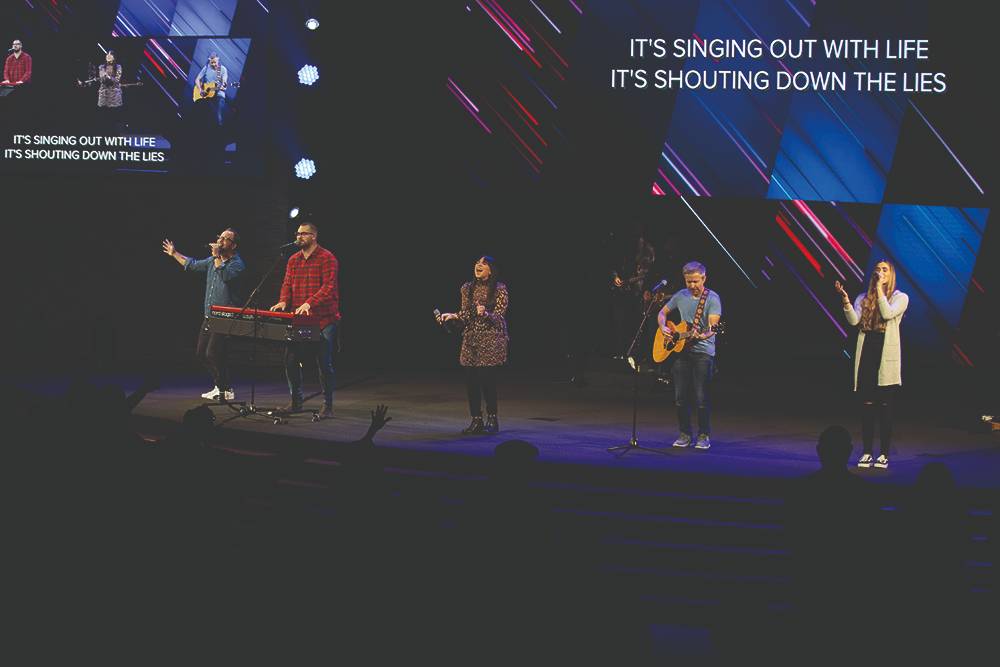 The Fort Walton Beach and Destin campuses were looking to improve the image quality of their LED video displays and asked Analog Way to demo a possible solution. “We didn’t have the Pulse 4K yet so I took a VIO4K system to Fort Walton Beach to demonstrate our scaling capabilities,” recalls Brian Smith, Southeast Regional Sales Manager for Analog Way. “They immediately noticed a big improvement in the quality of the signal and didn’t let me take it out! They didn’t want to go back to their old system after seeing the VIO4K, so I ended up leaving it in place until their Pulse 4Ks arrived.”

The new Pulse 4K not only solved the issue of image quality and scaling but also offered the churches low-latency IMAG, seamless switching of multiple sources, and ease of use for volunteer operators. “It ticked all the boxes for Destiny Worship Center,” Smith says. The Fort Walton Beach and Destin units were purchased from Encore Broadcast in Tampa.

“It was great of Analog Way to let us have the VIO4K loaners while we were waiting for the Pulse 4Ks to come in,” notes Ricky Moore, Pastor of Communications based in Destin. “It showed the kind of company they are.”
The Fort Walton Beach campus features a large LED videowall backdrop, which displays nature and graphical backgrounds during services, a series of sermon images, and scripture to illustrate key moments. The main Destin campus has upper and lower LED videowalls in a portrait configuration with projection screens left and right primarily displaying IMAG with lower thirds. Playback at both locations is from ProVideoPlayer and Resolume sources.

Additionally, every seventh week the pastor in Destin, who is the lead pastor of the group, delivers a big-screen message for all the campuses. So far his message has been “very successfully displayed in Fort Walton Beach and Destin, and we expect to roll it out to our other campuses by the end of the year,” says Moore. “It gives a real immersive feel that’s very engaging for the worshippers.” The Panama City Beach and Freeport campuses are slated for Analog Way installs in the next six months; the Crestview location is currently in transition with that campus outgrowing its footprint.

Another every seventh week feature, which will debut in October, is Crosstalk. It will tie all the Destiny Worship Center campuses together during services so pastors can share news and activities. “They will be able to talk to each other live – everybody will be able to see everybody,” Moore explains. “This is where Analog Way’s scaler is important: The lead pastor will appear in a big PIP on screen while the others will be in smaller PIPs. There can’t be a significant delay campus-to-campus so we invested in NDI technology over Metro E SD-WAN to deliver the live feed.”

Moore notes that a key reason for choosing Analog Way Pulse 4K was its “simplicity of use and foolproof operation. We have eight paid staff in production media across the campuses and probably 25 volunteer slots that are filled by 110 people in rotation,” he points out. “One paid staffer runs the Pulse 4K in Destin, but everywhere else it will be volunteers. So it makes a difference that the system is so intuitive and easy to use.

“The capabilities of the Pulse 4K are more than enough for us now, and new firmware is constantly coming out along with new training programs,” Moore notes. “It’s just great for all we plan to do.”