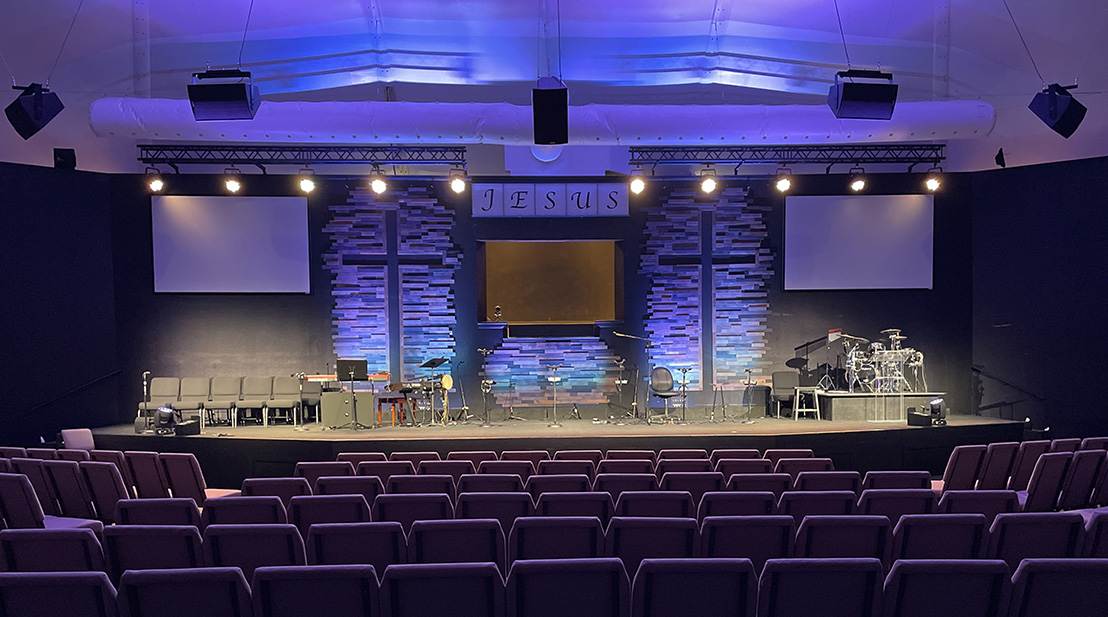 As part of a complete technical overhaul, River of Life Church in Crawfordville, FL has upgraded its full lighting system for the first time since its building was constructed 18 years ago. The new setup, which utilizes ADJ fixtures for both house and stage lighting, has not only vastly enhanced the aesthetic of the space but also significantly improved electrical efficiency through the use of LED light sources.

Firelight Media and Integration was the company selected by the church to carry out a complete refit of its audio, lighting, and stage power infrastructure. The relatively young but fast-growing integrator specializes in the church market, driven by owner and founder Joshua Branch’s 15 years of experience in music ministry. Established in 2017 and based in Thomasville, South Georgia, the company services churches throughout the South East, all the way from Virginia down to Florida. Firelight became an ADJ dealer around a year ago and Joshua has nothing but positive things to say of his experience selling and installing ADJ fixtures.

“We had some success with product from other companies,” explains Joshua, “but felt that ADJ could be a good fit for our clients. When we became an ADJ dealer we soon discovered that the product is superior. The price-point is exactly where most of our clients want to be at, and the value for money is very good. Since we’ve switched to ADJ, the results have been amazing. As a business owner, I really like to partner with companies that I can build a good relationship with, that are going to listen, ask for feedback, and that is exactly what ADJ has done. Also, occasionally, it’s inevitable that something, somewhere will go wrong, so after sales support is very important. Although I’ve found ADJ equipment to be very reliable, if there is ever any kind of issue, ADJ has been on top of everything immediately and has taken care of myself and my customers directly, when needed. So, it’s been a very good experience and very good working relationship with ADJ so far.”

With a distinctive tent-style design, River of Life church is a sizeable building with a capacity of approximately 900. Prior to this upgrade, it’s lighting system was seriously outdated and extremely inefficient. The stage was lit by a collection of conventional lighting fixtures powered by four 10-channel dimmers, two of which were broken. Meanwhile, house lighting was provided by 1000W par cans pointed upwards to reflect off the building’s white ceiling. This setup meant that there was a large amount of excess heat generated, the video captured for the church’s online services was blown out, and there was very little scope for creativity when it came to lighting worship. Several companies bid to design and implement the new technical system, but it was the proposal from Josh and Firelight – including ADJ’s new Encore Profile Pro professional LED-powered ellipsoidal fixtures – that the church’s leadership selected.

“I think it was really the Profile Pros that got us this job,” comments Joshua. “We were able to provide what really is a pro-level product at an incredibly good price point, which really gave us the upper hand in the bidding process. The use of LEDs was also a big thing. As it’s a tent-style building, losing 30-something conventionals and replacing them with an all-LED rig will not only reduce the direct electric cost of running the lights, but also have a significant impact on HVAC costs taking out all that excess heat from inside the building.”

Firelight’s Technical Designer, Marco Guarino, created the plan for the new system using computer design software, which allowed for the inclusion of 3D visualizations as part of the proposal prepared for the church. Marco’s design utilized both the warm white (3200K) Encore Profile Pro WW as well as the RGBWAL color-mixing Encore Profile Pro Color. Eight of the color units were rigged to a first FOH truss and used to wash the rear wall of the stage and the worship team. Fourteen of the warm white version, fitted with 30-degree lenses and color correction filters, were then positioned on a second FOH truss to provide key light. Finally, two pairs of each fixture type were mounted to 45-degree trusses at either side of the stage to provide side fill.

Commenting on the Encore Profile Pros, Marco says, “They have exceptional output, especially at that price point. The color also just blew me away, I was really impressed by the linearity between all of the colors. I would expect a fixture with those performance characteristics to cost a lot more, and I have used fixtures from the most expensive brands on the market and this completely keeps up with them, to the point that we’ve even had to limit the output of some of the fixtures at 60% to prevent camera sensors from being blown out! I also like the fact that they use standard leko lens, and not some proprietary system, which meant that we were able to reuse a few of the lenses that the client already had for conventional fixtures, which allowed us to save them a little more money.”

Two additional trusses, positioned at the rear of the stage, were used to hang five ADJ 7PZ IP fixtures each. This heavy-duty wash fixture features an IP65-rated ‘weatherproof’ metal enclosure and a versatile dual bracket yoke that allows the unit to either be hung or set directly on the ground. It offers powerful output from an arrangement of seven 15-Watt quad color (RGBW) LEDs as well as a useful motorized zoom function, which allows the beam angle to be adjusted remotely between 5 and 45-degrees.

“This was my first time using the 7PZ IP,” states Marco, “and I was very impressed; it’s a fantastic fixture for colored backlight. The goal on this project was to punch color behind the speaking key light to give an extra dimension to video capture and the fixture delivered in an awesome way. I had used a similar fixture from a well-known brand, which is used by a lot of the local rental houses, but I can honestly say this blows it out of the water. The 7PZ IP has twice the output and I love the zoom range. As this church was moving from a system that was essentially just on or off for stage lighting, the leadership were clear that they didn’t feel they were ready for moving lights. But having the 7PZ IPs at the back allows for a variety of different looks from a nice wide back wash to tight rear spotting of band members and speaking positions. This gives them a good level of control without the complexity of movers, which is exactly what they wanted.”

In addition to illuminating and color washing the stage, Josh and Marco also chose ADJ fixtures to take care of house lighting in the church. They replaced the outdated Halogen lamp fixtures with fourteen highly efficient COB Cannon Wash DW units. Featuring a potent 150-Watt combined warm white and cool white COB LED source, this fixture offers a variable color temperature of between 3000K and 6500K. Its wide 80-degree beam angle makes it ideal for house lighting applications, but it is also supplied with easily replaceable 40-degree and 50-degree lens options that make it an extremely versatile wash fixture.

“I’ve used the COB Cannon Wash on a few projects before, but nothing as large as this,” comments Josh. “It’s the perfect fixture for house lighting and the results we got at River of Life were fantastic. We were able to fill the whole room with a really good coverage, no shadows, no concentration of light where it shouldn’t be, just a nice even wash. It gave us exactly what we needed at a really good price point for the church.”

This new lighting system has completely transformed the look of River of Life Church, prompting resounding ‘wows’ from the leadership team and congregation alike on the first Sunday it was commissioned. Not only has it delivered much more creative control into the hands of the church’s worship team and significantly improved the quality of their online service videos, but its reduced power draw and excess heat makes for a more environmentally friendly and cost-effective solution.

Summing up the project, Joshua concludes, “It was a night and day difference from what they had before. Our clients couldn’t believe the difference getting the lighting right could make, it was like walking into a completely new church!”