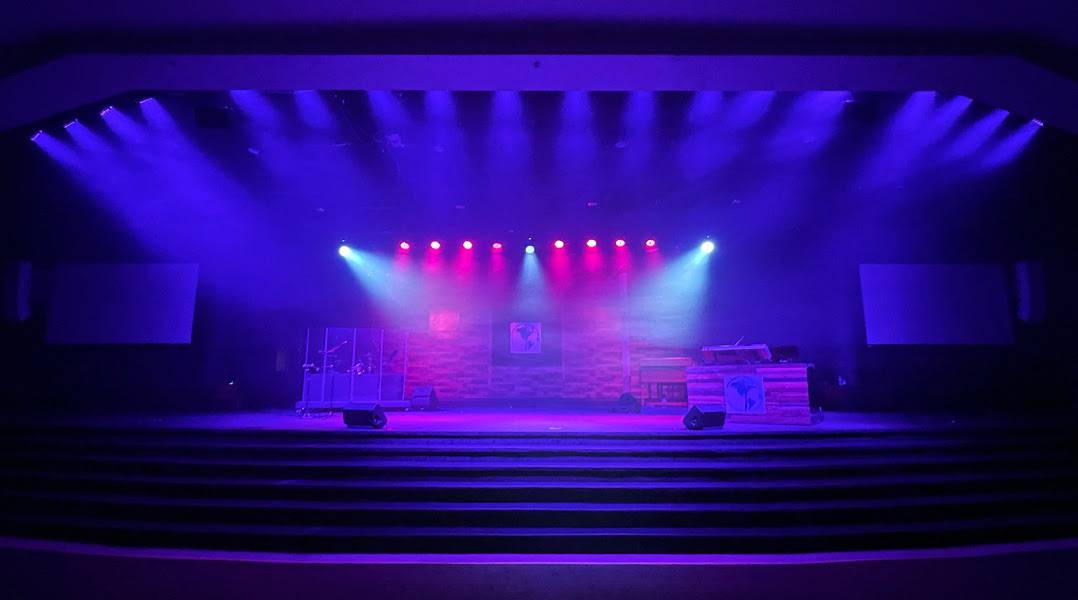 Established in 2017 and based in Thomasville, South Georgia, Firelight Media and Integration serves churches throughout the Southeast. The company is owned and managed by Joshua Branch who is well connected in the church community, having spent 15 years as a fulltime Worship Minister before transitioning into audio, lighting and video integration. Joshua grew up as a ‘Pastor’s Kid’ and his relationship with All Nations started before he was even born, as his father was a minister at the church way back in the ‘70s. Having developed and maintained a good relationship with the church over the years, he was the leadership team’s first call when they decided it was time to upgrade their aging lighting system.

“I was initially approached about this project around a year and a half ago – a little before COVID,” states Joshua. “They hadn’t upgraded their lighting for around 20 years, which meant their current system was starting to fail, causing increasingly noticeable inconsistencies in the wash pattern on the stage. Because the rig was purely incandescent fixtures, their power bill had also become astronomical. So, the big push for this whole project was a system that was more cost effective to run as well as more versatile. By specifying ADJ’s LED-powered fixtures, we were able to deliver exactly what they were looking for and bring down their power bill so much that the new system will pay for itself pretty quickly!”

With seating for over 2000 people and a large stage measuring approximately 55’ wide, the first challenge for Joshua and his team was to wash the large area across the front of the sanctuary used by the pastor when he is preaching with an even coverage of front wash. To achieve this, ADJ’s Encore FR150Z LED-powered wash fixture was selected. Equipped with an 8-inch Fresnel lens, and harnessing the power of an efficient 130W warm white (3000K) LED light engine, the unit offers a variable beam angle of between 15 and 38-degrees and a high CRI of 95, making it ideal for stage washing applications.

“This was our first time using the FR150Z and I think it is a phenomenal light,” enthuses Joshua. “The ADJ Encore Profile Pro ellipsoidal fixtures have become a staple of our lighting designs when it comes to key light, but – because of the sheer size of the area that needed to be washed – we’d have had to use dozens of them which would have been outside the church’s budget. They also didn’t have any spotlighting requirements, but were just looking for a large consistent wash, so a Fresnel fixture was ideal. We were able to deliver exactly what they were looking for using just fourteen FR150Z fixtures; those lights really fit the budget the church had and performed incredibly well. From my perspective, I loved some of the little features that they offer, for instance the Gamma correction, which allows you to go in and do minute changes that optimize the lighting for video capture. Online streaming is a big priority for this church, as it is for most churches at the moment, so getting the lighting to look perfect on video was very important. The aesthetics of the light output is also fantastic; you really can’t tell it has an LED light source and not an incandescent bulb, it has a traditional Fresnel-style look that is very consistent. The output power is also very impressive, in fact the church is generally only running them at around 30-50% they are so bright!”

Towards the rear of the stage, in the area occupied by the band, Joshua wanted to give the church the flexibility to either continue the warm white wash across the whole stage or introduce colors during times of worship. To achieve this, he choose ADJ’s 18P HEX high power LED pars, which each utilize eighteen 12-Watt HEX (6-in-1) LEDs to offer unrivaled color mixing potential. The new lighting system at All Nations Church features twenty-eight of these fixtures, with eighteen illuminating the rear section of the stage, eight providing a back wash for the musicians, and two dedicated to illuminating the stage’s distinctive wooden backdrop.

“This was also my first time using this fixture,” says Joshua, “as the 7PZ IP is usually our go to, however on this project we didn’t need the zooming feature and the 18P HEX allowed us to keep within budget. I was blown away by the build quality of the metal housing and the output of the LEDs, they really are super bright! We couldn’t believe that all it took was just two fixtures to wash the whole back wall, which is actually much bigger than it looks in the pictures! The color mixing is also incredible, and we were able to get a really nice warm white that blended perfectly with the FR150Zs, so much so that when the whole stage is washed in white you really can’t tell when the FR150Zs end and the 18P HEXs begin.”

To complete the lighting system, the Firelight Media team installed three of ADJ’s Vizi Wash Z19 moving head fixtures across the rear of the stage. Each powered by an arrangement of nineteen 20W quad color (RGBW) LEDs, this potent wash fixture offers huge output as well as an extensive feature set. Motorized zoom allows for a beam angle variable between 10 and 60-degrees, while independent control of up to seven separate LED zones allows for the creation of mesmerizing ‘eye candy’ effects.

“The church wanted a fairly traditional feel, so didn’t want to go too crazy with moving lights, but they did want to add in some of the flexibility offered by movers. Again, this was my first time using the Vizi Wash Z19 but, having had such success with other ADJ fixtures on past projects, I decided to try it out. I’ve previously used a very well-known fixture from another brand, but I’m confident switching to the Vizi Wash Z19 was the right decision. Not only did it come in at a better price point, but its output proved to be as good, if not better! It also has a great zoom range, allowing it to be used as a tight spot to hit specific band members and also as another wide wash option. It’s a versatile fixture that does its job exceptionally well.”

To control the new system, Firelight Media supplied ADJ’s popular myDMX 3.0 software, which they used to program the rig providing the church’s volunteer media team with lots of creative options. They then took simple control to the next level by installing an ADJ myDMX RM. This rackmount hardware unit can be programmed using myDMX 3.0 with up to 16 lighting scenes and then function as a standalone control device which allows the scenes to be recalled at the touch of a button.

“myDMX has become our go-to control solution for churches who are looking for simplicity,” explains Joshua. “A lot of churches rely on volunteers, who may not have that much lighting experience, so they want something that is easy to pick up quickly. That was definitely the case for this church, so we used the myDMX RM to provide an extremely user-friendly interface that anyone can use with only a minimal amount of training. myDMX 3.0 gives them all of the control flexibility they’ll ever need, but then the rack-mount unit means that literally anyone can walk up and hit the buttons to select pre-programmed scenes during a service.”

The system designed, supplied, installed, and commissioned at All Nations Church by Joshua and his team at Firelight Media has completely transformed the stage’s aesthetics, both for in-person congregations and those watching online. Not only has the new rig achieved its goal of significantly reducing the church’s power bills, but it has also delivered an extremely bright and even front wash as well as the flexibility of full color mixing for the rear section of the stage and the added versatility of moving head fixtures. This is now all being put to use, week-in-week-out, by the church’s volunteer techs who start out using the extremely simple push-button control of the myDMX RM and can then choose to progress to the myDMX 3.0 software should they wish to delve deeper into the art of lighting design. The whole project is a perfect example of the right equipment, deployed in the right way, within a client’s budget, to not only meet their requirements but go a step further and surpass them!