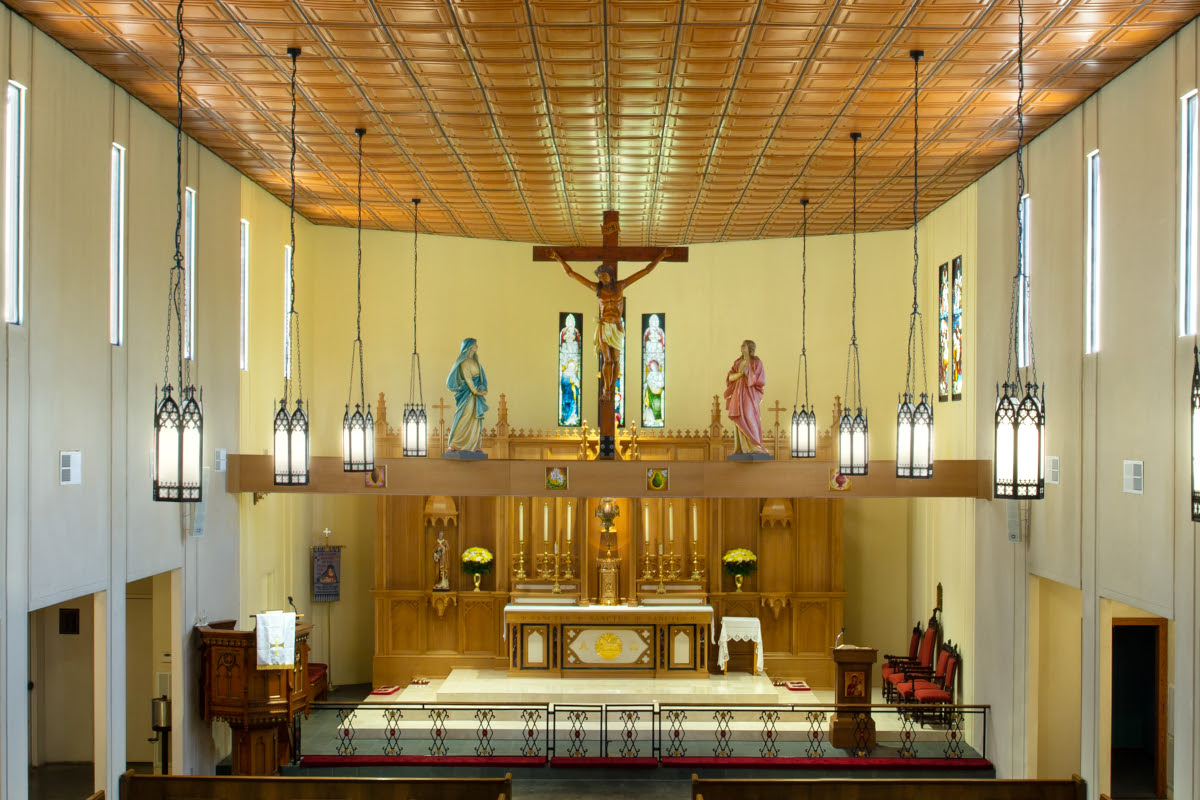 Renovating a church can be a huge undertaking, but church communities have a major resource, beyond money, that they can bring to bear: the congregation. Father Prentice Dean, the pastor of The Church of St. Mary the Virgin in Arlington, TX, selected an innovative ceiling material and found that it brought his congregation together. He and his parishioners installed the ceiling themselves, replacing stained and yellowed mineral fiber panels with thermoformed ceiling panels that look like carved wood and create a welcoming warmth in the sanctuary.

St. Mary the Virgin was built around 1990 as an Episcopalian church. In 1994, the entire congregation converted to Roman Catholicism, but they were allowed to keep the building. It was a congregation of modest means that had limited the décor of the church’s interior to an almost spartan simplicity, and the white, 22-foot high ceiling gave the sanctuary a cavernous feeling.

Recently, after many years of saving and with a generous bequest from a devoted parishioner, the church was in a position to undertake a much-needed renovation of the interior. This was where Fr. Dean stepped up. Earlier in his life, he had been in the construction industry. “I know which end of the hammer to hold,” he explains. In fact, this was not the first church that he had renovated. He knew how to work with engineers and contractors, and understood the issues involved in renovation and construction.

Improvements and additions included a new pulpit, six new side altars, a new baptismal area, new furniture where the priest sits, and new floors of blue slate and marble. Most significantly, there is what Fr. Dean describes as “a very substantial carved crucifix” that was given to the church in 2016. “It’s a ten-foot high crucifix – life size – carved from one piece of walnut in Mexico about 50 or 60 years ago,” recounts Fr. Dean. “It’s a very dramatic and realistic corpus of Jesus on the cross. There are only so many places you can only put that, but I have 22-foot ceilings. It’s a no-brainer.” To support it in the center of the church, a rood beam was erected across the chancel. The massive laminated wood beam is 17 inches deep. On it are statues of St. Mary and the apostle Michael, with the crucifix at the center. The face of the beam is adorned with eight hand-painted plaques, each bearing a symbol closely associated with St. Mary, joined together by a green vine that leads to the foot of the cross.

Fr. Dean worked with a variety of designers, craftsman, engineers and contractors for a year on the renovation project, and further improvements are still in the works.

There was general agreement among the congregation that they needed to replace the old recessed can lights in the suspended ceiling grid, 22 feet overhead. Instead, they chose hanging pendant lights with a Gothic wrought iron look. To accomplish this change, the electrician had to completely re-wire above the ceiling.

“While we were up there,” Fr. Dean chuckles, “everyone wanted to do something about the ceiling, too.”

The sanctuary had a suspended ceiling of mineral fiber panels, similar to the ceilings in millions of offices and supermarkets. “It really looked fairly hideous,” recalls Fr. Dean. “The roof membrane was not the best quality at the time,” leading to roof leaks. “The white panels had been horribly water-stained, as well as discolored by the incense used in the worship, which stains everything yellow.”

Fr. Dean had seen pictures of the Cistercian Abbey Church in Dallas, with its warm wood ceiling. “I said, ‘How do we warm up the ceiling if I keep the drop ceiling? I can’t put real wood up there…?” He started scouting the internet, and discovered lightweight thermoformed vinyl ceiling panels made by Ceilume, designed to replace mineral fiber panels in a suspended grid, a product he describes as “the best kept secret.” There was a light-toned faux wood finish, Caramel Wood, that “had the perfect color.” Fr. Dean selected Ceilume’s Stratford pattern, a square, three-dimensional design similar in appearance to a coffered ceiling. The thermoformed panels are impervious to water, stain resistant, and washable, so they will not be vulnerable to the same discoloration that the mineral fiber panels suffered.

Suspended ceilings in offices or stores are usually low enough to service from a ladder. With the church’s 22-foot ceiling height, something else was required. Fr. Dean negotiated an arrangement with the electrical contractor so that the parishioners could use the electrician’s hydraulic lift. During the day, the contractor re-wired the ceiling. At night, the congregation came in and worked from the lift. As they removed the old ceiling panels, they discovered there had been numerous panel replacements over the years. Old mineral fiber panels had been left stacked on top of newer panels, five and six deep and the weight was making the grid sag and buckle.

Before installing the new panels, they refinished the steel grid. “The thing is,” Fr. Dean explains, “that wood grain would not work with a white grid.” He decided to paint the grid in flat black, to complement the wrought-iron pendant lights. “I figured we’d just put a little spray paint up there. I didn’t know. We went through a couple of cases of spray cans.”

While painting the grid turned out to be a major task, installing the panels was very easy, even for amateurs. “We actually got pretty adept. What you do is you just kind of punch it straight up, and then you flop it back.” Fr. Dean cut some of the panels himself for places that required trimmed shapes. “They’re easy to cut with a utility knife or scissors. I did most of the cutting in the altar area, because the walls are angled.”

“We ultimately had 20 or 30 people involved,” he relates. “Some of my main workers were 85-year-old men. They’re up there on the lift, with dust-masks, etc…” They worked until midnight for three weeks. “I was there every night. I’ve never seen a parish turn out so consistently and steadily for so long.”

During this phase of the project, mass was moved into the parish hall. The new lights and ceiling were completed in December 2018, and they were able to hold mass in the sanctuary for Christmas.

“Everyone has been thrilled to death with the look,” Fr. Dean reports. “People who had visited beforehand and come in and see it now are just absolutely astounded. Another benefit has been our music program. The vinyl has had the effect of improving the sound transmission of the human voice from the choir loft.”

Other work is continuing, such as the side-aisles that, fortunately, only have 10-foot ceilings.