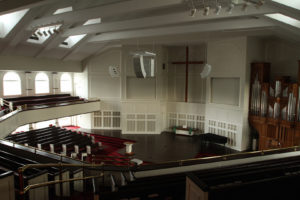 During a typical week, over 2,000 adults and students attend events and worship services at Christ Presbyterian Church in Edina, MN. For weekend worship, we currently offer both contemporary and traditional worship services in our main sanctuary, along with a variety of programs during the week. Our contemporary services typically involve 5-7 musicians featuring a variety of instruments and musical styles, and the worship music in our traditional service includes hymns, organ, choirs, soloists, and supplemental instrumentation. The styles of music are diverse.

Our main sanctuary was built in 1999, with the design established in 1998 – it’s a new room built to look and feel traditional. Originally designed by Tushie Montgomery Architects, the sanctuary reflects a Bostonian colonial architecture with soaring vaulted ceilings, plenty of natural light and clean white lines. At the time, we didn’t have the money to go with top-of-the line audio system. The system we installed worked; we had a cluster with horns and mid-range cabinets, etc. but the coverage wasn’t consistent. There were definite hotspots and great variety in the EQ spectrum depending on where you were sitting. Speech intelligibility wasn’t great in many parts of the room. About 12 or so years ago, we launched a Next Gen service called The Upper Room, and the band really pushed the old system hard – a lot of drivers were blown (or close to) and we were getting close to a system failure scenario. Coupled with the sound issues we were already experiencing during our regular services, we knew we needed to make a switch. We wanted our new loudspeaker system to cover the room, and to effortlessly adapt from a single presenter to a full band at concert level. Adam Bufi s, our tech director at the time, had a really good relationship with Reach Communications (he now works for them, as a matter of fact), so collaborating with them to choose and place our new loudspeaker system was an easy choice.

We had already done a number of smaller jobs with them, and felt confident that we could expect competitive pricing and stellar service. Adam was able to walk us through the pros and cons of different styles of loudspeaker systems, and we quickly determined that a line array system was the way to go. We ended up choosing a NEXO GEO S12 line array, consisting of four GEO S1210 and one S1230 for the main hang, two GEO S1210, one per hang for sides along with four GEO S1230s, two per hang, per side. Using the NEXO modeling software to help determine coverage, REACH also added four of the new NEXO GEO M620s for front fill along with ten PS8s for under balcony fi ll. Three NXAmp 4×4 and two 4×1 amplifiers power the system with five NXDT104 Dante Network Cards. We were lucky enough to be able to use the existing speaker cable for the most part, which was a huge savings for us. The SMAART system was used to help balance the room and EQ the arrays, which took a bit of time, but the effort was worth it. Once the room was balanced, the system was locked down – now, all we have to do is power the system up before worship begins 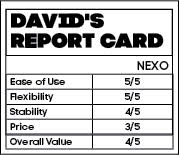 and we’re good to go. The digital signal path (Dante) starts at our Yamaha CL5 console and connects to a BSS London BLU806 which drives the NEXO amps.

The new system has been amazing – the sound coverage is now uniform, and the sound is so clear and balanced, we no longer have pockets of poor coverage or limited dynamics. The difference in sound has been night and day, and the introduction of the NEXO system into our facility has been seamless. Since the NEXO arrays are so compact, the aesthetics of the new system are actually an improvement over the older, bulkier system. Now, when we run our contemporary service with the full complement band, the sound is even and warm, and we get full-range top to bottom sound, covering the entire EQ spectrum – it’s exactly what we hoped for.