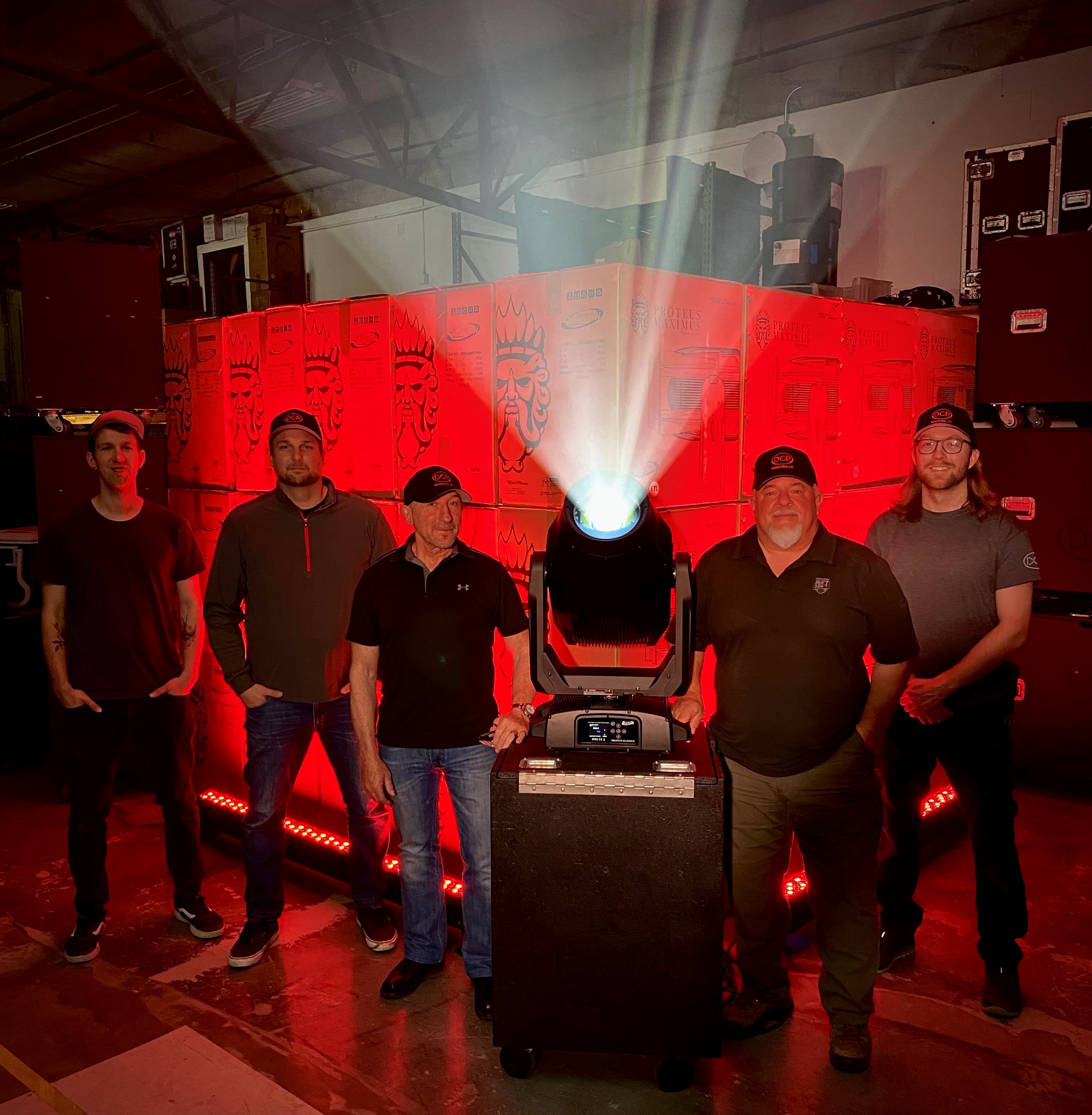 Like many in our industry, full service event production company DCR Nashville (DCRNashville.com) expects things to get extremely busy in the very near future. “Things in the live event industry are about to go absolutely nuts,” declared Howard Jones, founder and CEO of DCR Nashville, who just added 65 Proteus Maximus™ LED power luminaires to its ever expanding inventory. “With the supply chain issues that continue to plague the industry, it’s often a case of ‘If you’ve got the gear, you’re going to get the gig.’ With acquisitions like this, we’re positioning ourselves to be able to take advantage of that.”

DCR is dedicated to offering an up-to-date inventory of new equipment for clients in the corporate, live event and the concert touring markets. Seeking to add more powerful fixtures to their inventory, especially IP65 rated offerings, Jones says they knew they wanted to take a close look at the Proteus Maximus.

“We had heard through Chuck Dillingham and Dustin Pesnell at Freed Sales about the Proteus series, and had also noticed that the Maximus was showing up on riders for both indoor and outdoor shows,” Jones says. “We reached out to some designers we work with to get their take and they either said they had used the Maximus and loved it or they had heard good things about it, so that was very convincing. When Freed Sales demoed the fixture for us we were quite impressed and the fact that Elation had them in stock and available was also significant.”

The Proteus Maximus is a 50,000-lumen LED moving head routinely used to light some of the world’s largest outdoor shows and events and has found a home in outdoor performing arts venues and indoor and outdoor film and television production. The Maximus can be used as a profile, beam or wash light and houses a complete FX system (2 gobo wheels, animation, zoom, iris, dual prisms, dual frost), including a full blackout framing system. Its 950W white LED engine delivers a level of brightness that can reach across great distances.

The purchase gives DCR a 50,000-lumen LED product that can compete with the brightest discharge lamp fixtures on the market yet with the added benefit of a full weatherproof rating. “The output was definitely important but the IP65 rating also played a big role in our decision,” said Jones, who conveyed his dissatisfaction with years of putting moving lights on the front truss on a festival and losing fixtures due to rain. “The IP rating is something we’re looking at with all products going forward. If there are two comparable fixtures and one is IP65 and the other not, depending on the application, the IP rated fixture is probably the direction we’re going to take. It’s just something else you don’t have to think about when deploying gear on outdoor shows and large events.”

Besides the IP rating and 50,000 lumen output, Jones says the quality of the color mixing, as well as the unit’s indexable 4-blade framing shutters, were key features. “Having it all in one unit just made sense for us.”

Jones, an audio engineer who toured for 22 years doing audio, production and tour management, founded DCR in 2004 as a digital console rental firm. Initially focusing on audio, he eventually filled the demand for lighting and video as his clients’ needs grew. He says that DCR enjoys a good relationship with Freed Sales and have built up a solid inventory of Elation products over the years – Smarty Hybrids, Colour Chorus, Cuepix and DTW Blinders, and more. “It’s good product at a good price point,” he says.

DCR took delivery of the Proteus Maximus fixtures in late March and are poised to employ them on upcoming live events and concert touring shows, including a major stadium show in May to be named later. With a very busy summer schedule coming up including many outdoor events, with the Proteus Maximus in their arsenal, DCR Nashville says “Bring on the rain!”