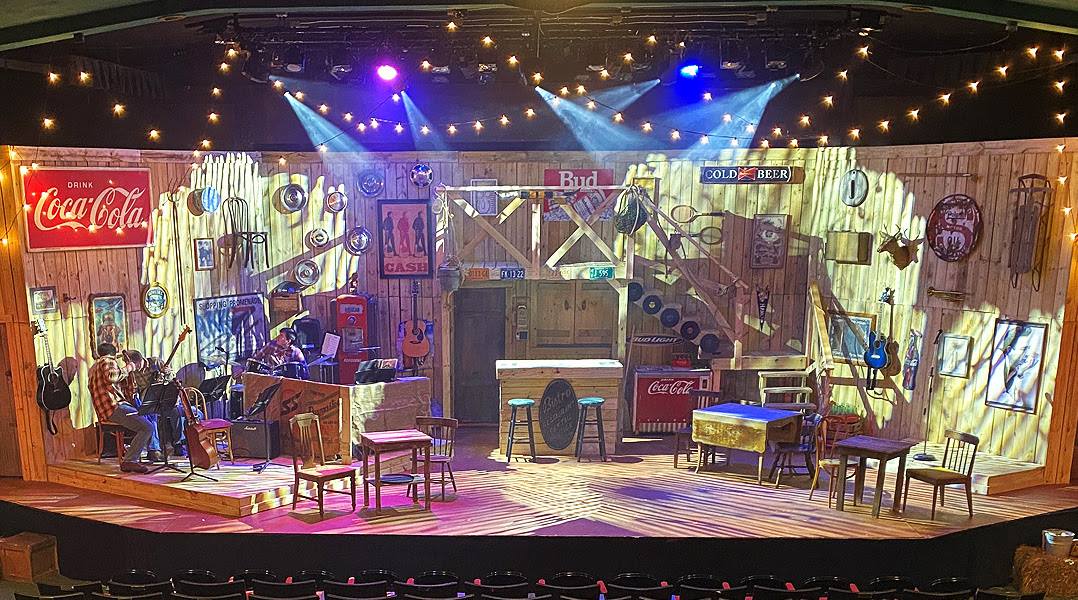 Established in 1988, the Cumberland is western Maryland’s only professional theatre, which produces an annual season of eight in-house productions. The theatre moved to its current location, a 200-seat converted church building, in 1991 and has become a staple of the local arts scene. Led by co-Creative Directors Kimberli Rowley and Rhett Wolford since 2016, the theatre produces a wide variety of shows, including both musicals and straight plays. Every production is developed in-house, with Rhett taking the lead on scenic design as well as technical aspects such as lighting.

When he took on the role of co-Creative Director, Rhett found himself working in a theatre that had an antiquated lighting setup that had not been upgraded since the building opened in the early ‘90s. Over the past five years he has led a program of technical renovations, as budgets have allowed, to introduce DMX control and LED light sources throughout the theatre. The latest phase of this upgrade process was to add in moving head luminaires that would provide added flexibility and creative potential, both for the productions – such as Ring of Fire – when Rhett serves as Lighting Designer himself and for those when outside LDs are brought in to add their creative flair to a show.

“I think moving heads take things to another level in terms of professionalism and creativity,” explains Rhett. “They are just so versatile. I had been looking at investing in them for a while and had done a lot of research by the time we made the decision to go ahead with the purchase ready for our production of Ring of Fire. I looked into lots of different manufacturers and product options before eventually settling on ADJ. I knew that the Focus Spot 5Z would be the best option for what we needed, but I’d decided on ten fixtures and our budget wouldn’t stretch to ten 5Zs, so I decided on the 4Z instead. Unfortunately, well actually fortunately(!), when I came to place the order the 4Z was out of stock, which meant they wouldn’t come in time for the show. So, I thought about it, re-did my plot, and decided that I could live with eight. I’m so glad ADJ were out of stock, because the extra features that the 5Z has over the 4Z have proved to be invaluable. It really is the perfect fixture for a small theatre like ours.”

The Focus Spot 5Z is built around a potent 200W cool white LED engine, which offers an impressive 50,000-hour lifespan. This is focused through high quality optics to allow the fixture to punch out sharp GOBO projections, in vibrant colors, that are equally suited to adding texture to a stage as they are to generating aerial effects. Despite its compact size, the unit packs in a versatile collection of beam-shaping tools that have been developed specifically for stage lighting. These include motorized zoom and focus, two independent color wheels, six replaceable rotating GOBOs, two rotating prisms (6-facet circular and 5-facet linear) and two frost filters (light and heavy).

“The 200W LED engine is incredibly bright, it punches through our stage wash really well,” enthuses Rhett. “I’ve even experimented with using the Focus Spot 5Zs as follows spots, which worked out really well and I plan to make use of for an upcoming production. I really like the two color wheels, the colors look really nice and saturated, and having CTO and CTB is amazing on a fixture at this price point, our costumer loves it! The 11 to 22-degree zoom is awesome, and the two frost options are also very useful. With the Heavy Frost applied I essentially have wash fixtures that I can set to any color and point in any direction, which is very useful. They are incredible lights!”

For the Focus Spot 5Z’s debut production at the Cumberland Theatre, Rhett opted to rig all eight fixtures above the stage in a symmetrical configuration. They were used extensively throughout the 2-hour production, utilized in a wide variety of different ways. For some scenes, the fixtures were used to backlight performers, tracking them as they moved across the stage. At other times, the units were used to achieve static looks, projecting GOBO patterns to add texture to the floor of the stage.

“The GOBO selection is awesome,” raves Rhett. “The star break-up pattern is really nice, and the multi-colored glass GOBO is fantastic. There was a scene towards the end of Act 2 when Johnny Cash dies and I used it to create a stained-glass window effect for his funeral, I had lots of people comment on how good that looks. I also like the fact that all the GOBOs are replaceable and I’m sure we’ll make use of that feature to use custom patterns on future shows.”

Fitted with high performance pan and tilt motors, the Focus Spot 5Z is capable of achieving quick movement. However, its motors also offer 16-bit fine control, which allows for precise static positioning as well as extremely smooth movements at slow speed. The fixture offers smooth 0-100% digital dimming with a choice of six dimming curves, each optimized to a variety of different applications. It also offers a Silent Fan mode, which can either be engaged remotely via DMX or from the on-board menu, which dims the LED output to approximately 70% to allow the cooling fans to slow to a speed at which they become virtually silent. This allows a lighting designer to switch to Silent Mode for quiet moments during a production and then switch back to normal fan operation, and utilize the fixture’s full output potential, for louder sections where fan noise won’t be noticeable.

“I love the versatility of the fixture; it really opens up lots of creative potential for what can be achieved on stage,” concludes Rhett. “I also like it that things such as the dimming curve and fan speed can be customized. I’m using the Theatre dimming mode, which works great and the Silent fan mode, which makes them run so quietly that you can hardly tell that they are on! Finally, being so compact and only needing a single clamp, they are very quick and easy to rig, which is important as we strike our above stage rig after every performance and then put it back up based on the plot from the incoming LD. Put simply, the Focus Spot 5Z is an amazing lighting fixture for theatre, bravo ADJ!”