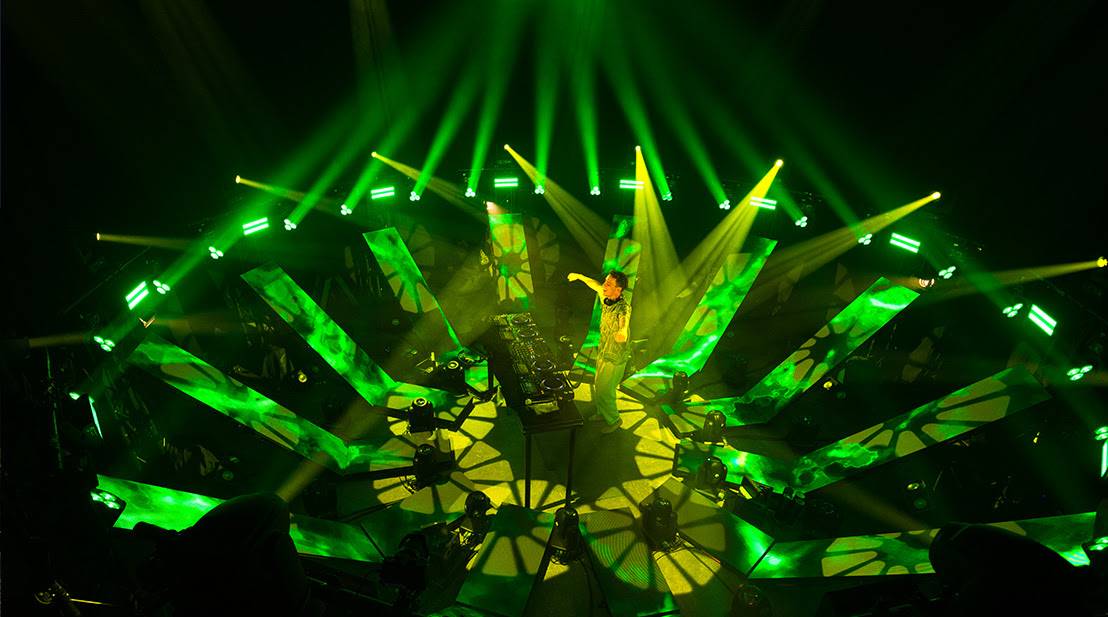 Coinciding with the voting for its Top 100 Clubs poll, DJ Magazine’s Virtual World Tour saw a line-up of big-name DJs live stream sets from some of the most iconic nightclub venues in the world. Bootshaus, located in an industrial area along the River Rhine in Cologne, Germany, has regularly appeared in the Top 100 Clubs list, ranking number 6 in 2020, up two places from the year before. For its edition of the Top 100 Clubs Virtual World Tour, the club partnered with German DJ and producer Felix Jaehn who has achieved worldwide chart success with a number of tracks, remixes and collaborations. Arguably his biggest hit, a remix of Jamaican singer Omi’s ‘Cheerleader’, made it to #1 in 55 countries, including 6 weeks at #1 on the Billboard Hot 100. As a DJ, Felix has toured extensively, playing some of the biggest festivals and clubs around the world.

The task of designing and implementing the technical production for Felix’s DJ Mag livestream fell to Guido Schütz and his company LaserFrame together with regular collaborator Patrick Hirt of Creative Sounds. Having served as the exclusive technical service providers for Bootshaus for some time, Guido, Patrick and their teams are responsible for designing, maintaining and operating the club’s house rig as well as covering any additional requirements for special projects and one-off events. They also have extensive experience of production design for livestreaming, having previously partnered on the creation of ‘The Tunnel’, ‘The Cube’, ‘The Wharf’ and ‘The Tower’, which provided a wide variety of local DJs and brands innovative studio setups for their live streams and video recording sessions.

“The original idea was to create a setup on the roof of the Bootshaus,” explains Guido, “but unfortunately the bad weather meant this wasn’t an option, so we had to come up with something else quite quickly. We didn’t want to go for a typical ‘stage’ type setup, which we see on so many DJ livestreams, but wanted to make the DJ and his performance the full focus. So, we decided to put the DJ position in the very center of the space and then built the rig around it in 360-degrees. To capture the set in a unique way, we didn’t want to just film from the front, but to get lots of different angles. When we saw the footage from the overhead camera the setup clearly resembled the center of an eye, so ‘The Iris’ was an obvious choice for its name.”

Due to limited ceiling load capacity in the warehouse building use to accommodate ‘The Iris’, the majority of the rig was floor standing. Twelve truss towers, constructed from black Duratruss DT34, surrounded the central DJ position. A ‘T-bar’ rigging pipe was then affixed to each upright truss to provide mounting points for a pair of Elation Professional RAYZOR 360Z compact LED wash fixtures, one at each side of the truss. In the center of each pair of fixtures was positioned one of ADJ’s Jolt 300 units, which are a new addition to LaserFrame’s rental fleet. A multi-functional LED-powered wash / strobe / blinder, this compact fixture features a central strip of cool white LEDs surrounded on both sides by arrays of multi-colored RGB LEDs. It provides lighting designers with a wealth of creative potential, allowing strikingly-bright white strobe effects, vibrant color washes and dynamic ‘eye candy’ chase patterns to be generated from one compact unit.

“For us, the Jolt 300 is the perfect fixture, enthuses Guido. “Before choosing it, we tested a lot of other options from different brands which were either too expensive or too limited. After our first test with the Jolt 300 we knew straight away that we needed to buy it, and we have now invested in 24 pieces in total. The brightness is very impressive, but the compact shape and light weight are also a big advantage. Another very nice feature is that the wash is very wide, not like a lot of the other fixtures on the market which have a narrower beam angle. The sequential control of the RGB parts gives us the opportunity to create very nice running light effects and on top of it all the very bright white LED strip in the middle of the unit is massively exhilarating. That gives us the opportunity to bring these units to bigger productions with no hesitation at all.”

In ‘The Iris’, the Jolt 300s were used to bathe the entire performance space with vibrantly saturated washes of color during breakdowns. At other times it was used to create blinding strobe or animated chases effects that could travel all the way around the 360-degree rig. This demonstrated perfectly both the versatility and power of this compact fixture, which led to Guido’s decision to add them to LaserFrame’s inventory.

On top of each truss tower was positioned an ADJ Focus Spot 4Z 200W LED-powered moving head fixture, while eight further units were rigged above the studio on trussing that also supported the black drapes which surrounded the whole setup. This allowed aerial GOBO projections to fill the space surrounding the DJ, while patterns could also be projected down onto the floor of the studio to provide added interest to shots captured by the camera pointed directly down into the center of ‘The Iris’. Strips of LED video panels ran out from each truss tower towards the central DJ position, but this left a considerable amount of empty floor space that the Focus Spot 4Zs were able to fill with movement, color and crisp GOBO patterns.

“Our decision to invest in the Focus Spot 4Z was a similar story to the Jolt 300. We had looked at, and tested, a lot of different units from a number of different brands and decided that the Focus Spot 4Z was the perfect fixture for our needs. It is small, lightweight, and we can rig the unit with just one half-coupler clamp which gives us the opportunity to build very flexible designs. For The Iris in particular, we couldn’t have used any bigger fixtures because of the available space. Despite this small size, the brightness is enormous, and it has exactly the features we need with no unnecessary extras. It has great zoom, shutter, color options and GOBOs, and really that’s all we need. We have 24 units in our inventory and, so far, they have never failed us.”

The final moving head fixture chosen for ‘The Iris’ was ADJ’s best-selling Vizi Beam RXONE. This compact and quick moving head harnesses the power of a potent Osram® Sirius 1R HTI long life lamp to produce a super sharp 3-degree beam of light that travels up to 100 meters. It features 14 colors + open, 15 GOBO patterns + spot, a 16-facet prism and a 21-degree frost filter, providing lighting designers with plenty of creative potential. For ‘The Iris’, 36 of the fixtures were positioned directly on the floor of the studio space. This allowed the DJ position to be surrounded with beams on all sides and also meant that stunning effects could be captured from the overhead camera that pointed directly down towards the fixtures.

“The RXONEs are our trophies! We have worked with them for more than four years now and in that time have only needed to exchange 3-4 lamps in these units, the others still work with their first bulbs! They are very compact, but incredibly powerful which means that we are able to use them on our biggest productions. Even though they are quite old now, there is still no need to swap or replace them as they are very reliable and still look fantastic, especially when used in big quantities.”

Completing the lighting rig for ‘The Iris’, twelve Elation CUEPIX Blinder WW2 LED-powered warm white 2-cell blinders sat directly on the studio floor, positioned between each truss tower, angled in towards the center of the space. Finally, three ADJ Encore FR150Z LED-powered Fresnel fixtures were used to illuminate the performer. One positioned directly in front of the DJ setup served as the key light, while the other two provided left and right fill to ensure nice even coverage for video capture.

As can be seen from the video recording of Felix Jaehn’s Top 100 Clubs Virtual World Tour livestream below, ‘The Iris’ provided a truly unique backdrop for the performance and the ADJ / Elation Professional lighting rig allowed for the creation of a wide variety of stunning lighting effects. Following the DJ Mag livestream, the studio was also used to record performances by some of the Bootshaus’ resident DJs as well as a handful of other guest performers, before it was dismantled and the creative team began coming up with ideas for their next project…