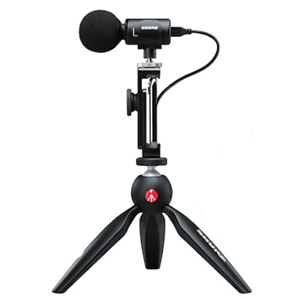 I recently acquired a new iPhone SE, one of the few modern smart phones small enough to fit comfortably in the pocket of my jeans. I soon learned that it has a very capable camera and processor but the internal microphone is monophonic and designed primarily for phone conversations.

So, I searched for external microphones designed to work with my iPhone and selected the MV88 from Shure. Shure advertises the MV88 as a product that can turn your phone into an audio recording studio or video camera for recording or live streaming. Based on my experience, that’s no exaggeration. It’s a well-designed professional microphone system with accessories to meet a wide variety of applications for churches and other users.

There are actually three MV88 products, all part of the Shure “Motiv” family. One is just the microphone with windscreen and carrying case. The others are kits designed for a greater variety of audio and video applications. All three share the same rotatable capsule with a pair of matched 1 cm condenser microphone cartridges, mid-side stereo architecture and choice of adjustable-width cardioid mono, bidirectional mono and mid-side stereo operational modes. I purchased the MV88+ kit which includes Shure’s excellent SE215 earphones.

The basic MV88 is small, self-contained and plugs directly into an iPhone or iPad. In contrast, the MV88+ kit versions work with Android as well as Apple phones and tablets and include accessories for versatile audio and video recording or live streaming. The microphone in the two kit versions trades versatility for convenience. Instead of plugging directly into a phone, the MV88+ mic uses a cable to connect to the phone and includes an earphone connector that’s not on the basic MV88.

There are several excellent and low-cost smart phone apps for audio recording that convert the MV88 and your smart phone into a very high-quality stereo audio recording platform. The same is true for video recording apps. For example, I found an app that allows me to record simultaneously from the front and back cameras putting myself in a PIP position along with the person I’m interviewing. Shure says you can even live stream directly to Facebook or Instagram (etc.) by giving those apps permission to use the external mic. These features would not be available on a dedicated video camera.

There are disadvantages to using a phone in place of a dedicated video camera as well. My iPhone SE, for example, has a single camera with a fixed lens. Thus, it can only do digital zoom (no optical zoom) and I doubt it matches the lens quality of a professional video camera. And, while the MV88 is easy to set up and use, a dedicated video camera doesn’t require assembly for each use. And, the Shure Motiv apps, while very capable, are somewhat bare-bones in comparison to audio recording apps like Garage Band or the better video recording apps.

I was concerned that the combination of video recording and the power required by the MV88 microphone would drain my phone’s battery quickly and my iPhone’s battery was down several percentage points during the first 15 minutes of recording. Your experience will be very phone-dependent but other reviewers report two hours or more battery life for continuous recording which should meet most needs. I also worry about the small and potentially fragile lightning connector on the basic MV88. However, the mic itself is just over 40 grams (under 1.5 oz) so a careful user shouldn’t have a problem. 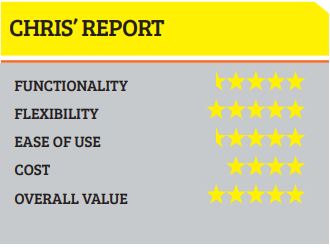 What about cost? If you add the cost of the MV88+ kit to the cost of an uppertier smart phone (with dual cameras, etc.) you’ll rival the cost of a mid-priced video camera. However, if you already have a smart phone with a decent camera, as I did, this is a low-cost way to acquire truly professional audio and video recording and streaming capabilities. For large churches, the MV88+ with a smart phone could be a versatile addition to your existing video camera complement and audio recording capabilities. For small churches, the MV88+ with an existing smart phone could be an low-cost way to begin video recording in worship services or for a YouTube channel or Facebook live stream. I’ve recorded parts of a rehearsal at my church which I’ve posted to our SpeakAV YouTube channel – check them out.

Chris Foreman attends Berean Church in Lincoln, Nebraska, and is a Partner at SpeakAV, a content marketing and consulting group. Foreman has held engineering, marketing and management positions at several pro audio companies and is widely published. He co-authored “Audio Engineering for Sound Reinforcement” with consultant John Eargle.