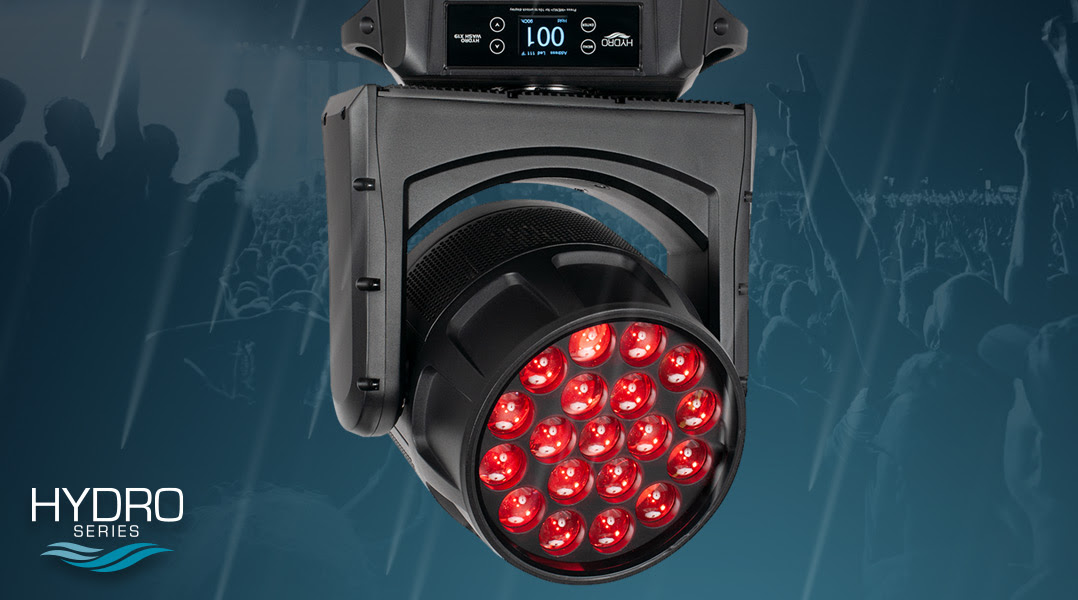 The latest addition to ADJ’s popular Hydro Series of weatherproof moving head luminaires, the Hydro Wash X19, is a powerful and versatile wash fixture designed for touring, rental and event production applications. Combining impressive brightness with an expansive feature set, this rugged workhorse is ready to shine in even the most challenging of conditions.

19 Osram 40W RGBW 4-in-1 LEDs fill the face of the Hydro Wash X19, making for an impressive total of 760W. The LEDs offer smooth color mixing, allowing for the creation of a wide variety of different hues, and are arranged in three concentric circles. Each LED is individually controllable, allowing for the creation of pixel-mapped effects, with support available for both the KlingNet and Artnet control protocols as well as standard DMX-512.

Linear motorized focus allows the beam angle to vary between a narrow 6-degrees and wide 40-degrees. This means the fixture can be used to create tight mid-air beam effects as well as bathe large areas with vibrant color washes at different moments during the same show. The focus function is both fast, to allow quick changes between different looks, and smooth, to allow seamless slow transitions.

The Hydro Wash X19’s robust all-metal casing is ready for the rigors of the road, while it’s IP65-rating means that it can be used safely outdoors in all weather conditions. Protected from rain, dust and dirt, it can be used reliably anywhere from dusty deserts to rainy fields. However, the fixture isn’t designed soley for use outdoors. For indoor shows its sealed-shell protects the unit from dirt, dust, drinks and haze residue to prevent build-up on internal components and therefore offer a prolonged operational life and reduced maintenance requirement.

Despite its substantial size, the fixture is quick and nimble. It features 16-bit fine motor control and is therefore also capable of impressively smooth slow movement. It features a tilt range of 230-degrees and pan range of 540-degrees, while also offering 16-bit fine dimming for precision control of output and slow fades in and out.

Fitted with an ADJ WiFLY receiver built-in, the fixture can be controlled via wireless DMX from a distance of up to 2,500ft / 700M (line of sight) as well as using a conventional 5-pin cabled connection. It offers three control modes: 18, 87 or 89, with the latter two options providing individual color mixing control of each separate LED pixel. It is also compatible with the RDM protocol, which allows remote addressing and trouble-shooting of the fixture from a RDM-compliant lighting control system.

On the front of the unit’s base is a full-color backlit display screen together with four corresponding touch control buttons. This interface allows easy and intuitive DMX addressing and mode selection, as well as configuration of the fixture’s various customizable operating parameters. These include a choice between six different dimming curves as well as variable LED refresh rate and adjustable Gamma settings to allow the fixture’s use in studio and other filming applications. The screen also displays useful operating information, including current running temperature, DMX address and DMX mode.

The rear of the unit’s base is home to locking power input and output connections as well as the 5-pin DMX sockets and a USB port for easy future firmware updates. All five are IP65-rated and fitted with protective rubber covers for when the socket is not in use. The fixture is fitted with large rubber feet, which allow it to stand directly on a stage or riser, and is also supplied with a pair of Omega bracket and safety chain attachment point to allow safe and secure rigging.

“The Hydro Series has proven extremely successful over the past year,” comments ADJ USA’s National Sales Manager, Alfred Gonzales, “and a large-format wash fixture was a logical progression to take it to the next level. The Hydro Wash X19 packs a serious punch from its 19 x 40W LEDs, offering considerably brighter output than any other IP-rated wash fixture in its class. This, combined with pixel control, a robust metal build and significant zoom range, explains why we’ve already received a huge amount of interest from rental houses and production companies looking to add this to their lighting inventories in significant quantities.”

The Hydro Wash X19 joins three additional IP65-rated moving heads in the award-winning Hydro Series. The Hydro Wash X7 is a smaller wash fixture that incorporates 7 x 40W RGBW LEDs. Meanwhile, the Hydro Beam X1 is a compact beam fixture harnessing the power of a 100W Osram Sirius HRI discharge lamp, and the Hydro Beam X2 is a large beam unit that generates an incredibly intense shaft of light thanks to a combination of precision-engineered optics and a potent Osram Sirius HRI 370W LL discharge lamp. The Hydro Series is ground-breaking because it brings IP65-rated moving head fixtures within the reach of a huge number of lighting designers, production companies and installers working on projects with budgets that up until now would not have allowed for IP-rated fixtures.

The ADJ Hydro Wash X19 is shipping now from ADJ USA and will be available from ADJ Europe next month.

To find out more about the ADJ Hydro Wash X19, visit:
www.adj.com/hydro-wash-x19