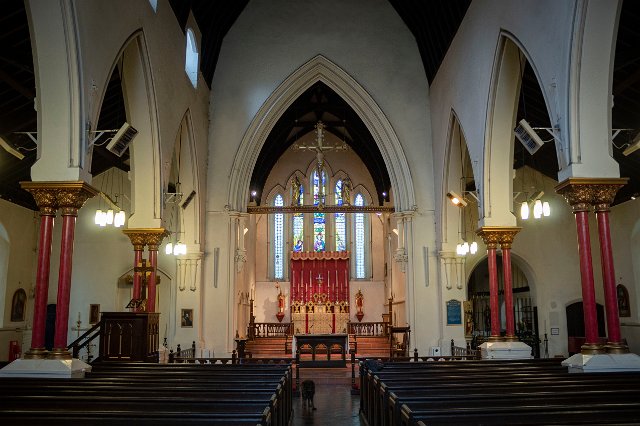 Located a short distance south of Elephant & Castle, the church of St John The Evangelist in Walworth faces all the usual acoustic challenges of historic houses of worship. Here, solutions are also potentially more complex because it is Grade II listed. But systems integrator Flipside Soundsystem was equal to the task, assisted by Yamaha’s groundbreaking VXL line array loudspeakers.

“The existing sound system was about 20 years old, only partly operational and the sound it did produce was tinny and artificial,” says the church’s assistant priest Simon Askey. “We wanted a system that would amplify speech authentically, rather than sound like a PA system, and that could be used by those who wanted to use either fixed or wireless microphones.”

Flipside managing director James Cooper and his team were very taken with the aesthetic of St John’s; its tall, vaulted timber ceilings and unusual cast iron columns giving the building an air of grandeur and Victorian progress. So it was very important not to impact on that.

“Church systems need to be a number of things. They need to be visually as inconspicuous as possible, but deliver high speech intelligibility, while coping with often very lively acoustic spaces,” he says. “Control-wise, they need to be extremely easy to use, but also resilient to curious ‘knob-twiddlers’.

“At St John’s, the system would be primarily used for worship, meaning spoken word with perhaps a small amount of choral music played back from time to time. Occasionally, the church is used for outside groups and weddings, where more music playback is needed. So we were requested to design a system primarily for church use, but also to cater for music applications, with perhaps the odd instrument being plugged in.”

James chose a pair of Yamaha VXL1-24 line array speakers, mounted each side of the chancel arch, each with a VXS10 subwoofer, used to complement the VXL1s for music playback applications.

A Yamaha MTX3 matrix processor takes inputs from four fixed and two wireless microphones, all managed by the MTX3’s onboard Dan Dugan automixing, which eliminates any potential feedback issues.

A single DCP4V4S wall-mounted controller has an on/off switch and volume control for the wired mics, radio mics, a CD player and a pair of RCA system inputs. Together with the Dan Dugan automixing, it makes system control very simple for church staff, with the system locked off at the MTX3 to prevent unauthorised tampering.

“We wanted to use as few speakers as possible, carefully selecting those with a dispersion pattern that allowed us to target sound directly at the pews and nowhere else,” says James. “The new Yamaha VXL range is brilliant for this sort of application and meant that we could achieve very similar decibel levels at the front and rear rows of pews, which are 17 metres apart.”

With a new induction loop system fed by a separate matrix send from the MTX3, those with hearing aids are also able to benefit from the same improved audio quality that everyone else at St John The Evangelist is now enjoying.

“We were impressed that Flipside didn’t try to sell us an off the shelf product, but something tailored to our particular situation and needs,” says Simon. “The system works well, with the voice amplification sounding more like human voices in a theatre than a PA system in a church. It has made our worship more inclusive, because everyone can hear… and what you hear is the natural intonation of a human voice, which was lost on the old system.

“I also particularly liked the fact that they went to great lengths make the system ‘disappear’ in the building.”

“We’re really proud of this system,” adds James. “It’s a great showcase of how a simple approach to audio can create amazing results for any house of worship, without costing the earth!”