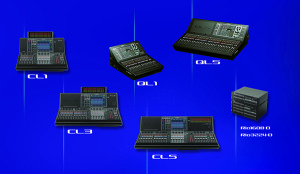 Yamaha Corporation of America, Professional Audio Division has announced the April availability of a very significant firmware update for both CL and QL Series Digital Audio Consoles. V4.0 firmware update offers new features and enhanced operation and takes another leap forward with new EQ algorithms, a Premium Rack device, and other features that provide live sound support at an even higher level. StageMix application software for use with an iPad and related software is updated as well in V6.0 and further expands the range of both consoles for enhanced creative freedom and operability.

The new MBC4 is a four-band multi-band compressor that combines a GUI offering outstanding operability and visibility with advanced VCM modeling for higher overall performance. The musical response of analog compressors was studied in depth and recreated in detail in the MBC4 gain reduction circuit, allowing flexible dynamics processing while retaining the integrity and musicality of the source.

A new Solo Mode offers mix engineers solo-in-place. A Second Cue Bus option enables the MATRIX 7/8 bus to be used as a CUE B bus so that in-ear monitors and wedges can be monitored via separate CUE buses, for example. The separate CUE buses can be accessed via the console or remotely via Editor or StageMix application for monitor controls.

MonitorMix is an application for the iPhone, iPad, and iPod Touch that allows wireless control of Send levels to the mix bus. Up to ten devices running MonitorMix can be used simultaneously, providing a convenient way for individual performers to adjust their own monitor mix, having just the control of their own mix bus, so that any personal adjustments won’t affect the mix heard by the other performers.

DCA Roll Out has been enhanced adding the ability to scroll through the members of the DCA when the number of DCA members is greater than the number of available faders using a channel encoder on CL Series consoles. Also, the Gain of the GEQ band specified via the touch screen and Touch & Turn knobs can now be adjusted while the faders are being used for DCA or channel control.

Another significant update is the control of the head amps in the Tio1608-D I/O Rack for TF Series Consoles from CL and QL consoles, making it possible to combine the Tio1608-D with the R Series stage boxes.

New Features in CL/QL StageMix V6.0 include Effect Editing. Effect parameters that could previously only be edited via the CL or QL Series Console can now be edited using the StageMix application.

“We are very pleased to further build upon our CL and QL console platform with this immensely significant upgrade that includes useful features our users have been requesting, states Marc Lopez, director of marketing, Yamaha Professional Audio, Commercial Audio products.

The CL/QL V4.0 firmware update will be available for download from the Yamaha Pro Audio website by the end of April.

For more information on CL/QL V4.0 and StageMix 6.0, visit Yamaha Professional Audio during NAB 2016, at Booth #C1445 or on the web at www.yamahaca.com.