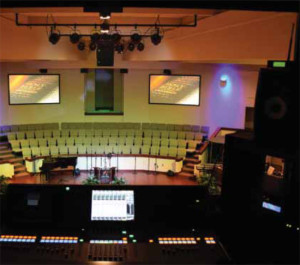 First Seventh Day Adventist Church in Huntsville, AL, was founded in 1937 as a small company of seven or eight people, and slowly grew from there. In 1952, it became a local congregation and has grown from an initial 76 members to over 1000. We have two facilities, a church plant in the north-eastern part of Huntsville, and our new location which is more central within the city. The new facility was the Church of Christ, but we renovated it to suit our needs, speciﬁcally in relation to our audio-video ministry.

Our vision statement is ‘where broken lives are made whole’ and we believe that communicating the gospel in ways that people will understand is vitally important. Our A/V ministry plays a huge role in helping us accomplish this vision. Recently, we worked with Muzeek World to purchase and install two Yamaha CL5 Digital Audio Consoles. One is our FOH mixer in the center of the sanctuary, on the balcony level, and the other is in a separate room, where we use it for mixing the sound for recordings and video streaming over the Internet. The decision to move to the CL5’s was an easy one to make. We were already familiar with Yamaha, having had an M7CL32 in the previous sanctuary, and had a wonderful experience using it. Since the CL5 is based on the M7CL framework, we had a team already trained to use the same software which made the learning curve on the new consoles a breeze. Other than the initial network programming and a few changes in the setup, we had the entire team up to date in a couple of weeks.

Our entire sound and video team consists of six video and seven audio volunteers. We are continuously training and are planning two audio visual boot camps for about three to four weeks each this year, which will discuss every aspect of running a safe church service and delivering an outstanding church experience. We use our second CL5 to capture a live video and audio stream, not just audio. However, we do plan to have the church services on the Internet available in audio format only in the future.

In addition, there were several new features in the CL5 which helped the church decide this was exactly what they needed for the new sanctuary. We also like the fact that we can expand the number of channels we can use on the CL5. We have initially enabled the board with 64 channels, and it’s great to know that we can expand as needed without having to go out and purchase a new board to handle future growth. 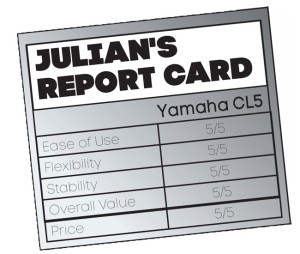 The church uses an average of 5 to 9 musicians at any given time. We have a seven member praise team and several choirs ranging between 30 and 100 members. With our FOH CL5, we can have our sound engineer easily control the monitor mix while doing a sound check with the musicians. He can also use an IPad to ﬁ ne tune and make changes on the monitors and have an accurate overview of the mix, which eliminates potential discrepancies between what the vocalists need and what they get in to the ﬂoor monitors (our band uses an in-ear system). We currently use the Nuendo Live software to capture multi-track recordings, transitioning to Cubase in the next few weeks.

Installing two Yamaha CL5’s was one of the best decisions our church made. Having a wide array of choices when it comes to audio mixing really helps us deliver an outstanding church service.

For the last 6 years Julian Ray has been responsible for the A/V department of First Seventh Day Adventist Church. He has specialised in broadcast systems design and wireless communications for 20+ years.