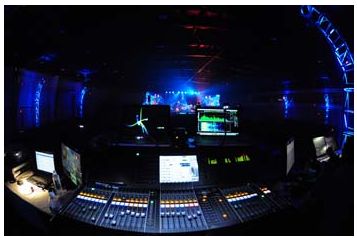 One Yamaha CL5 digital audio console accompanied by two Rio3224-D input/output racks were used at front of house with a CL1 selected for monitor mixing along with two ProPlex Gigabit switches for network redundancy. “Net

work redundancy was important because of the high-profile nature of the event,” states Chris Wintz, Rental Manager, TC Furlong. “The crew at Willow Creek likes to have backup/redundant systems whenever possible.”

”Since the CL5 was already specified as the front of house console after the Willow Creek team attended a demo, and challenged with keeping the monitor mix area to a small footprint yet needing a system with ample mix buses, the CL1 was a one-stop solution,” says Wintz. “In the 13 years with have collaborated with the Willow Creek team, this was one of the most streamlined solutions we’ve put together.”

“We decided on the CL system for a number of reasons,” states Nathan Miller, Systems Designer/Engineer, Miller Audio Services (Chicago), audio contractor for the event (assisted by systems engineer Matt Satorius). “One factor was the ability to use the Premium Rack Portico plug-ins. We used the Portico 5033 EQ and 5043 Compression on the lead vocals at both front of house and monitors. We also used the U-76 plug-in at front of house across the drum bus as well as the Opt-2A plug-in to add a mastered sound to the IEM mix busses at monitors. The other major factor was the overall efficiency of the setup and strike. Switching to a digital snake really helped make the overall load in/load out easier. Not only were the FOH/MON 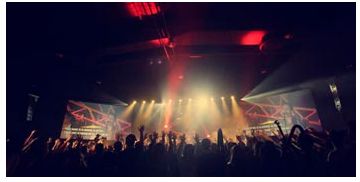 Miller said the CL5s were easy to operate by event engineers Stephen Kendeigh and Ryan Pribyl due to console familiarity since the pair use Yamaha consoles for regular youth services. “Blast 2013 represented a major step forward not only in our audio system architecture, but in the overall sound quality of the event,” states Troy Bartholomew, Technical Director for the ministry who oversaw all of the production for the event. “Nathan’s choice of the CL Series streamlined our setup while giving us more features and flexibility than we have had in past events. Also, Ryan and Stephen’s ability to utilize the fantastic new features really elevated the audio experience for all of our students. Throughout the weekend, I received a lot of positive feedback from industry veterans, audio contractors, and Willow production staff who were able to come in and listen to the system.”

One of the largest churches in the U.S. with an attendance of 20,000 on any given weekend, Willow Creek regularly host retreats for youth and adults for their congregation. This particular event featured guest presenters along with a church house band of seven musicians and vocalists. For more information on Willow Creek, visit www.willowcreek.org