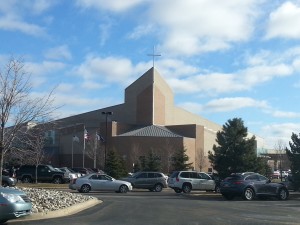 Woodside’s Lake Orion campus was originally founded in 2009 as a portable church, operating out of an area middle school. Recently, the church acquired a new building for the Lake Orion campus to call home, outfitting the space with a Renkus-Heinz VARIAi variable array loudspeaker system. As Bob Sullivan, Principal of Advanced Lighting and Sound in Troy, MI, explains, the 85,000 square foot former retail store was an unusual and challenging space.

“Because it was a former retail space, there were a number of structural changes that needed to be made,” Sullivan begins. “There were issues with bringing power and other infrastructure up to code, as well as a need to accommodate an existing set of escalators between floors.”

The sanctuary seats around 750 people. “The shape is oddly rectangular but somewhat asymmetrical to accommodate the escalator,” continues Sullivan. “As always, budgets were part of the challenge, but we were able to allocate for some minimal acoustical treatment, which helped tighten things up a bit.”

The system is comprised of two arrays of VARIAi Variable Array loudspeakers, each utilizing two VAX101i-15/12 and two VAX101i-22/12 boxes. “We chose the VARIAi for its ability to shape the coverage for the room, in both the vertical and horizontal planes. With the VARIA’s variable coverage patterns, we were able to configure a system using fewer cabinets than we would have needed with a standard line array. That flexibility was essential in meeting the room’s acoustical challenges, as well as the project’s budget constraints. The ease of installation and the system’s clean design were a plus for the church.”

“Advanced Lighting and Sound has worked with Woodside Baptist Church for more than ten years, providing audio, lighting, and video for all their campuses and workshop spaces,” Sullivan concludes. “This was one of the more challenging projects, and thanks to the VARIAi system, one of the most rewarding.”