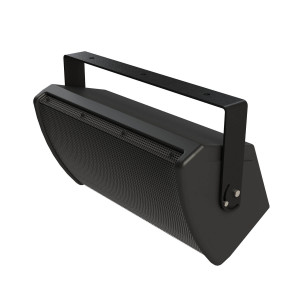 After an unusually long time in research and development, Danley Sound Labs is proud to announce the new Go-2 Series of extremely affordable loudspeakers and subwoofers. While Danley is known for building unconventional loudspeakers and subs that use innovative technologies – including the massive Jericho Horn employed in many of the world’s largest arenas and stadiums, the Go-2 Series fills a gap at the opposite end of the spectrum, where smaller, low-cost loudspeakers are needed. Importantly – and this is why the research and development took so long – the Go-2 Series uses Danley’s patented Synergy Horn technology in clever ways to give the Go-2 Series sound quality worthy of the Danley name.

The Go-2 Series uses injection-molded cabinets that are constructed, like all Danley MOLDED loudspeakers and subwoofers, in Gainesville, Georgia. While completely at home indoors – both in terms of aesthetics and rigging points – the Go-2 Series is impervious to weather and ready to deliver Danley intelligibility, musicality, and transparency to fans outdoors with an optional grill making a Go-2 loudspeaker fully weatherproof). Currently, the Go-2 Series consists of the GO-2-28 (dual eight-inch woofer), the GO-2-8PR (eight-inch woofer with a passive radiator), the GO-2-8CPR (eight-inch coaxial with a passive radiator), the GO-2-6C8 (a six-inch coaxial with an eight-inch woofer), and the GO-2-8C8 (an 8 inch coaxial with an eight-inch woofer).
“For a long time, we’ve been hearing designers and integrators say, ‘man, we love the sound and performance of Danley, but we need a go-to box that competes with the Asian made products price,” said Mike Hedden, president of Danley Sound Labs. “Sure, we could have followed the others and have products made off-shore or south of the border, but that’s not who we are. To do it right (the Danley way) required a lot of thinking, planning and hard work. Today we’re introducing the Go-2 Series, which I’m happy to call a Danley product. I challenge anyone to A/B it against their favorite entry-level loudspeaker, a Go-2 will kill it. Heads are gonna spin. Moreover, I’m proud to say that, unlike almost every other entry-level loudspeaker on the market, the Danley Go-2 Series is built right here in the USA.”