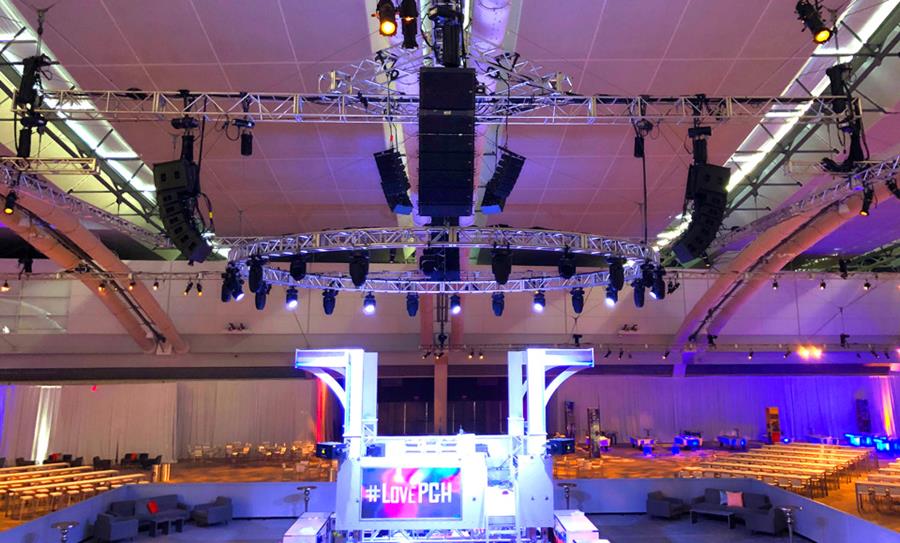 Pittsburgh, Pa. – From January 6-9, 2019 more than 4,000 business events strategists from 36 countries convened at the David L. Lawrence Convention Center in Pittsburgh for the annual PCMA “Convening Leaders” conference. In keeping with the conference theme, “Disrupt and Deliver” VUE teamed with Pittsburgh-based Three Rivers Entertainment to deliver a world-class production experience that held the attendees’ attention throughout the 3-day event including a keynote presentation by tennis great and activist, Billie Jean King.

“PCMA members are the best and brightest in the business event space and specialize in producing events that capture the mindshare of millions,” explained Sara Elliott, VUE Chief Operating Officer. “Given how high the production-quality bar was for their annual conference, It’s an even greater honor to have provided the sound system that helped these leaders plan the memory-making events of tomorrow.”

The in-house AV and lighting provider for the Convention Center, Three Rivers, was tasked by PCMA to deliver a high-output, low-profile, 360-degree-coverage sound system for the 200-foot square event space and center stage in-the-round. In fact, at 236,000 square feet, the venue is the largest column-free exhibit space in the U.S. and posed unique challenges with its floating roof system. And since the sound system shared the truss system with an extensive lighting rig, weight was a major consideration.

According to Thomas, VUE was the clear choice for the audio component of the event given the brand’s sonic performance and weight-to-output ratio. “VUE’s weight-to-output ratio and tonal consistency from array to array made it the ideal choice for this high-profile production. Packaging the al-8 and al-4 symmetry in the design was slick, alternating the in-fill with al-4s. The event planners wanted nothing on the floor so we looked to the al-8sb for extending the lows. But I couldn’t resist sneaking the four hs-221’s under the stage to keep it fun—after all, the client wanted disruptive!”

And from all accounts, the VUE system delivered on all fronts. Gilchrist commented, “I knew Rob Thomas and R/T Audio would bring their knowledge and superior products to help solve the rather difficult challenges posed by this event. And anyone who attended the event would confirm that he and VUE most definitely delivered.”