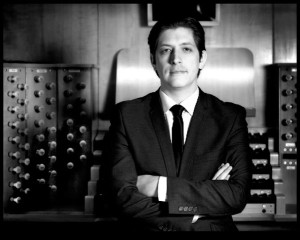 Mr. Boucher will be playing on both of the sanctuary’s organs, including the newly restored Beckerath instrument boasting 78 stops and 5,811 pipes on five keyboards, making it the largest purely mechanical-action organ in the country. He will also hold the position of Artistic Director, carrying on the great tradition of Sunday organ concerts, now in its 55th season.

Vincent Boucher is enjoying a true double career, pursuing both music and finance. He has performed extensively and internationally, notably in England, Austria and France. He has been awarded some fifteen prizes and honours, including the Prix d’Europe in 2002, and his discography includes eleven recordings that have garnered critical praise. He has studied under Bernard Lagacé and, while in Mireille Lagacé’s class at the Conservatoire de musique de Montréal, was unanimously awarded a first prize for organ and harpsichord. He has also completed a doctorate in performance at McGill University with John Grew and William Porter, and furthered his studies in Vienna and later in Paris. With over 21 years of experience as a liturgical organist, Mr. Boucher was the titular organist at Sainte-Cécile de Valleyfield Cathedral from 1996 to 2000 and is currently the assistant organist at Saint-Jean-Baptiste Church in Montreal since 1993. With a degree from Oxford University, he has worked in the financial industry for over 15 years and is currently an investment advisor at National Bank Financial.

“We are pleased to welcome Vincent Boucher as a member of the Oratory’s team. His passion for the organ and the classical repertoire is instantly recognizable in his performances. We are delighted that such a renowned organist as Mr. Boucher is putting his talents as concert artist and liturgical organist to the benefit of the Oratory’s pilgrims and visitors,” says Father Claude Grou, CSC, Rector of the Oratory.

Our complete schedule is available at www.saint-joseph.org
Follow Saint Joseph’s Oratory on facebook.com/osaintjoseph and twitter.com/osjmr