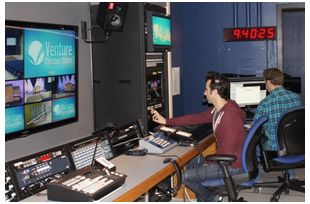 Utah Scientific, the worldwide leader in routing and master control switchers, today announced that Venture Christian Church, one of the Silicon Valley’s premier houses of worship, has outfitted its newly renovated video production facility with a Utah Scientific UTAH-100/UDS Universal Distribution System. The new HD-SDI routing system serves as the heart of the facility, which was completely rebuilt to convert it from an analog, composite, 4:3 aspect ratio system to a digital, HD, 16:9 aspect ratio system with a new IP control infrastructure.

“Routing infrastructure was central to the design of our new system. We needed the flexibility to move HD video signals easily among all of our production areas while keeping the system cost within a strict budget,” said Jeffrey Cherin, Venture Christian Church’s pastor for worship and production. “The new UTAH-100/UDS routing switcher gave us just the solution we were looking for. We chose Utah Scientific because we wanted a broadcast-proven solution that was very space-efficient, backed by a company known for product reliability and customer service.”

Venture Christian Church had key requirements for its new routing system, which is housed in the church’s main worship center in Los Gatos, Calif. Since the router is controlled from multiple locations, not all of which require a dedicated router control panel, it was imperative that users be able to control the router from both a dedicated control panel and the church’s IP network. Additionally, because the router resides in racks in the control room, it had to run quietly.

Venture Christian Church worked with systems integrator AV-integrators to install the UTAH-100/UDS as the central routing system for its five-camera video production system, which feeds a shooting studio, two front-of-house projectors, a worship leader “foldback” projector, monitor feeds to the foyer flat screens, and feeds to an adjacent venue. The control interface is a mix of an XY panel in production control, a custom controller at the camera shading position, and IP control in the edit suites and offices. The routing switcher’s I/O options exceed the requirements of 1080i, and its I/O cards are 3G-SDI video-capable, giving Venture Christian Church the ability to route video resolutions higher than 1080i in the future as its front-of-house projection needs evolve. In addition, the system was designed so efficiently that it required only a single year’s budget instead of the two years that were originally planned.

“We’ve been working with AV-integrators for a couple of years to configure routing solutions to fit small- to medium-size video system applications for customers such as Venture Christian Church,” said Tom Harmon, president and CEO of Utah Scientific. “With our UDS series of routing switchers, AV-integrators can provide a Utah Scientific-quality routing solution to customers who might not otherwise be able to afford a broadcast-grade integrated routing matrix.”

The modular UTAH-100/UDS system is based on I/O modules with 16 ports, interconnected by a crosspoint fabric that allows any input signal to feed any number of output ports. More information on the UTAH-100/UDS Universal Distribution System and other Utah Scientific products can be found at www.utahscientific.com.