It has been just over a year since Robe Lighting released the Pointe, and time has proven that with this light, you don’t need another ﬁxture. I ﬁrst saw the Pointe at Plasa Focus 2013 in Orlando, only a few weeks after it’s unveiling. After a short demo by Inside Sales Manager Jerry Seay, I was sold. I had never seen a ﬁxture do so many different tasks so well. On top of that, I could lift it with one hand! 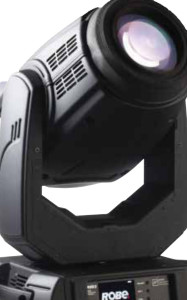 The Pointe continues the Robe philosophy of “Smaller, Lighter, Brighter”. Weighing in at just 33 pounds, rigging is a breeze for a single person; certainly a welcome change from the days of 100+ pounds ﬁxtures that took two people to move, let alone hang. Measuring a mere 22” tall by 14” wide, the Pointe is compact enough to ﬁ t 4 in a road case that would normally hold two movers of equivalent brightness. Speaking of brightness, the Pointe’s are blindingly bright. The 280w Osram Sirius HRI lamp, in combination with Robe’s precision optical system, puts out just over 75,000 lux at 20 meters in beam and over 82,000 lux at 5m in spot.

Perhaps one of the most impressive features of the Pointe is the versatility. Traditionally, moving heads have been categorized as either spot or wash ﬁxtures with the beam category becoming increasingly popular in the past several years. The Pointe not only crosses over all three categories, but it does so exceptionally well. When in beam mode, the zoom range is 2.5° to 10°. Once gobos or prisms are added in, the zoom lens shifts up, widening the beam angle to a more conventional 5° to 20° degrees. To ﬁll out its diverse usage, a variable frost turns the unit into a remarkably even wash unit.

A Thousand Pointes of Color

The Pointe ships with an array of colors and gobos sure to keep any worship leader happy. While it may lack a CMY color mixing system, the 13+white dichroic wheel includes a full array of thoughtfully chosen colors. The unit also sports dual gobo wheels: one static 14+open wheel, as well as a 9+open “Slot&Lock” rotating gobo wheel. The rotating wheel has a good variety of geometric and breakup patterns while the static wheel is more suited to aerial patterns, including 4 reducer gobos great for obtaining a 0° beam. In practice, I have found that the Pointe’s gobo wheels are so precisely aligned that care must be taken when programming focus palettes. With such a short arc lamp and close optical path, even the heat from the lamp can alter the focus ever so slightly. This may mean that you spend more time setting up and programming cues, but I certainly feel it is a worthwhile trade for the size and intensity of the ﬁxture.

A rare feature for the size and price, the Pointe also contains two separate, rotating, indexing prisms. The ﬁrst, an 8 facet circular prism, is great for covering an entire ﬂoor or set in patterns and color. However, my personal favorite is the unique 6-facet linear prism. The linear prism creates a straight-line fan of beams, gobos, or any other combination of the ﬁ xtures modiﬁ ers. When used in a hazed room some spectacular dimensional effects can be produced.

Packing this much into such a small, light ﬁxture is a feat in itself, but the Pointe keeps on delivering. With a rapid movement and effect speed, the Pointe makes transitions nearly seamless. Seeing gobos ﬂ ash by is generally not desirable, and this ﬁ xture tackles that by being very, very fast. Live gobo and color changes, which were previously too slow to be possible in my venue, happen in literally the blink of an eye. Even the zoom and focus can move from one extreme to the other in an exceptionally short amount of time. Whether you want it to happen instantaneously or over a slow fade, the Pointe will react quickly and smoothly.

A full complement of input and output options makes them ﬂ exible enough to mix into any rig. DMX-512 5 pin and 3 pin ports are included as well as an option for wireless DMX reception from Lumen Radio CRMX transmitters. The Pointe also comes standard with an Ethercon input allowing it work directly with a variety of ether-DMX protocols directly. As a bonus, DMX received either wirelessly or over Ethernet is re-broadcast out the hardline USITT-DMX-512 outputs effectively turning each ﬁxture into a DMX node. This is very useful if the ﬁ rst ﬁ xture in each location has a CRMX receiver or interprets an Ethernet protocol and the remaining ﬁxtures are all daisy-chained to its output.

Even conﬁguring the ﬁxture is extremely simple with a large color touchscreen and RDM capabilities. A built in battery allows for addressing before the units are even connected to mains power. Other handy features include a default screen with a large, high-contrast, display of each ﬁ xtures address, which is either solid or ﬂ ashing to indicate DMX state and is easily readable from the ground while the units are hung. Pan and tilt locks, as well as included ¼ turn omega brackets makes handling effortless.

With its unprecedented abilities to act as a spot, wash, or beam ﬁ xture all in one very lightweight and compact chassis the Pointe is the ﬁ xture I would choose if I could only have one. Setup is convenient with a built in battery allowing the entire ﬁxture to be conﬁ gured via its onboard touch screen controls even when far away from mains power.

For what you get, the Pointe is a very reasonably priced lighting ﬁxture. A lot of features are included in a unit with an MSRP of $7660. One of the things you can count on when buying any product from Robe is support. Recently, a Robe service tech was sent out to upgrade our Pointe’s with some newer parts that had been redesigned. There was no charge for this service. 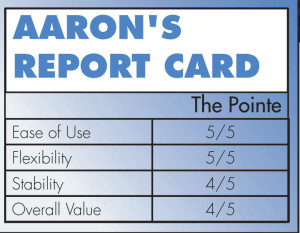 Overall the Pointe is an exceptional piece of craftsmanship. With unmatched brightness and speed, in such an easy to use, lightweight and compact package, this ﬁ xture stands above the rest. Everything it does, it does exceptionally, consistently well.

Aaron is the Principal Lighting Designer at Christ Fellowship in Palm Beach County, FL, and the owner of A-Train Productions, specialising in Lighting Design and Theatrical Automation.