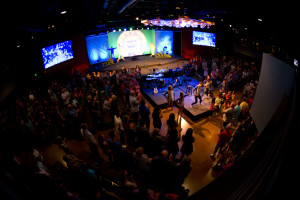 The Bridge Bible Church in Bakersfield, California, has plans for its future. The 12-year-old house of worship, whose sanctuary today accommodates 1,200 worshippers at a time – a total of 2,5000 weekly across three Sunday services, is considering adding a satellite location sometime in the next year or two, which will necessitate the acquisition and integration of video cameras and I-MAG projection, something they don’t need currently thanks to an architectural design whose curved balcony makes for a pleasantly intimate worship space. But when The Bridge Bible Church makes its expansion move, its media infrastructure will be ready, thanks to the purchase earlier this year of a Roland V-1200HD Multi-Format Video Switcher. The Roland V-1200HD was purchased through Pacific West Sound, also in Bakersfield.

Currently, the V-1200HD acts as the switcher between a main graphics computer running Pro Presenter software and a Blu-ray player. In addition, says Tim Young, Production and Technical Coordinator at the church, the V-1200HD’s aux outputs allow the church to route video from the stage to the church’s cry room, café and lobby. “Before, those areas could only see the camera focused on the stage,” he says. “Now, they can also see the computer graphics, which makes for a better worship experience.” Once the church adds another location, it will require the addition of live-streaming capability. That’s something the Roland V-1200HD is ready for. “We’ll be able to use the V-1200HD’s aux engine for the live stream, which is one of the reasons I went with it.” As was the V-1200HD’s ease of use — Young, an audio professional who learned video as he went along, says he was able to set the V-1200HD and configure it before the Roland technical rep arrived. “It was up and running seamlessly, so he was able to show me some of the more advanced aspects of the unit,” says Young. “What’s great is that this is a system that can grow along with us.”

The Roland V-1200HD Multi-Format Video Switcher is a Hybrid 2 M/E switcher that combines the features of a production switcher with the power of a presentation switcher. Users can switch and control functions on the Roland V-1200HD using the dedicated V-1200HDR Control Surface or free downloadable Remote Control Software (RCS). Users can also connect up to two compatible control devices on a network to separate out switcher functions by M/E’s, keying, or audio mixing. Multiple M/E configurations can be selected from 1 M/E to 1.5 M/E and 2 M/E to meet the needs of any live production. Inputs include 10x 3G-SDI and 4x HDMI with 6x 3G-SDI Outputs and 2x HDMI outputs. Scalers on HDMI inputs 3 & 4 and HDMI outputs support SD through HD resolutions. The V-1200HD has a powerful built-in 16-channel audio mixer that can be expanded via Roland’s XI-Expansion cards to support audio over Dante or REAC. An intuitive user interface with assignable cross-points and on-screen names ensures maximum flexibility for live production or broadcast.