When BVBC began expansion campus planning, I was commissioned to design the audio, video and lighting systems. Both campuses required matching systems, so volunteers could work at either campus, using the same gear, the same way, achieving the same results. Presentation systems in the youth, activity, and hall spaces needed to accommodate non-technical people. Youth, activity, and fellowship hall rooms needed to function as overﬂ ow seating for the worship centers. The new Olathe campus youth and fellowship hall required zoning functions, allowing them to function independently when divided into smaller rooms by air walls. This meant almost starting from scratch at both campuses.

We chose Symetrix SymNet Solus, SymNet Radius 12×8 and ZoneMix 761 digital signal processors, because of my experience with them in demanding, heavy-use, facilities. They are reliable, sound great, have no user accessible controls and have great people supporting them. Symetrix tech support has always been expedient and thorough. Repairs are turned around quickly. Last, and certainly not least, Symetrix has Dante!

Our worship center speakers are Fulcrum Acoustic. Fulcrum speakers have demanding, proprietary, processing requirements. Symetrix is one of the few certiﬁ ed capable of Fulcrum’s “Level 1” crossover, equalization, delay and limiting processing. Many competing products, costing much more than the Symetrix Solus4, cannot provide Fulcrum’s processing. To say that people are impressed with the sound is an understatement.

Youth and activity rooms were designed around Symetrix Radius 12×8 processors. These units function as speaker crossovers, equalizers, delays and limiters for JBL AE full-range and subwoofer speakers. Radius functions as an automatic mixer for an Apple TV, Denon video media player/streamer, Sennheiser wireless microphones, wallmount microphone and HDMI inputs. The video audio lowers automatically, or “ducks”, when the presenter speaks into the microphone. Microphones are turned off, or “gated” when no signal is present.

Getting Into the Zone

Children’s and fellowship hall rooms have the most trafﬁ c and non-technical users. The rooms serve as overﬂow seating for the worship center and a children’s corporate worship space. Numerous groups use the spaces daily. Air walls divide the rooms into two, three or four rooms.

In addition to the Apple TV, video media player/streamer, two wireless microphones and four wired microphone inputs, each partitioned room has local DVI and HDMI inputs, allowing teachers to use computers and media players. The Symetrix ZoneMix 761s are the perfect dedicated six zone mixers for the task. Like the Radius processors, the 761s provide JBL speaker processing, automating, ducking and gating functions.

The bulk of the programming was complete before installation. Speaker tuning and room combining programming was ﬁ nalized on site. The staff and I visited each room, listened and agreed upon settings for most situations. The settings were saved as default presets. A solution was provided to those requiring more hands-on operation. Every room’s equipment rack has a LaunchPort charging station and an iPad. The iPads are dedicated wireless audio, video and lighting system controllers. Users can access ARC-WEB via the iPads web browser to select presets or sources they wish to control and adjust the volume. The app interface is very clean and easily read by those with less than perfect vision. In true church form, things continue to evolve. When new functions are requested by the staff, I play Scotty on Star Trek, telling them it is hard work and it will take a long time. But, it is very easy to make changes. All processors are conveniently accessed and programmed wirelessly via our equipment racks’ wireless routers.

There are so many more applications, features and beneﬁ ts to using these processors. I have just scratched the surface. I replace racks of aging, dedicated analog processors with these devices. Reducing the number of components in any sound system reduces noise, potential points of failure, and improves the system’s performance. We have literally saved cash strapped churches from replacing systems, by adding an affordable Symetrix Jupiter and programming it 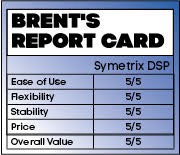 properly. They are now customers for life!

We sell several competing lines and I could have speciﬁ ed almost anything. Knowing I would have to live with my decisions, as the design-builder and a volunteer user, I chose Symetrix for my church.

Brent Handy is a Deacon and Worship Arts Volunteer at Blue Valley Baptist Church in Overland Park, Kansas, and a design-buld consultant for Advanced Sound & Communication, with a long history in ministry, contract installations and touring production.